"Singin in the Rain" Review

Singin’ in the Rain is one of the most-loved and celebrated film musicals of all time from MGM, before a mass exodus to filmed adaptations of Broadway plays emerged as a standard pattern. It was made directly for film, and was not a Broadway adaptation.

Don't use plagiarized sources. Get your custom essay on
“ “Singin in the Rain” Review ”
Get custom paper
NEW! smart matching with writer

This movie was a great movie. Even though it was one of the first colored films it was great because they mixed comedy, musical, and romance into one film. What a good combonation. Each genre is strongly used throughtout this whole movie which is a high aspect that makes this movie strong. This movie is fit for students such as myself becasue the film shows how movies today all started. From silent to talkie. It has come along way and only will get better.

The plot of the film is actually an autobiography of Hollywood itself at the uprising of the talkies.

The story is about a slick, smug but romantic silent film star matinee idol (Don Lockwood) and his beautiful blonde screen partner (Lina Lamont) who are expected, by studio heads, to pretend to be romantically involved with each other. They are also pressured by the studio boss R. F. Simpson (Millard Mitchell) to change their silent romantic drama and make their first sound picture, renamed as the musical The Dancing Cavalier.

The star’s ex-song-and-dance partner (Cosmo) proposes to turn the doomed film into a musical, and suggests that Don’s aspiring actress dancer-girlfriend (Kathy Selden) dub in her singing voice behind the scenes for lip-synching Lina. The results of their scheming to expose the jealous Lina and put Kathy in a revealing limelight provided the film’s happy resolution. In conclusion, i would recommend showing this film to a Literature and Film class because it sows how silent films transitioned into talkie films. The film may also appeal many students to their liking. A movie everyone can enjoy – Comedy, Musical, and Romance.

"Singin in the Rain" Review. (2020, Jun 02). Retrieved from https://studymoose.com/singin-in-the-rain-review-new-essay 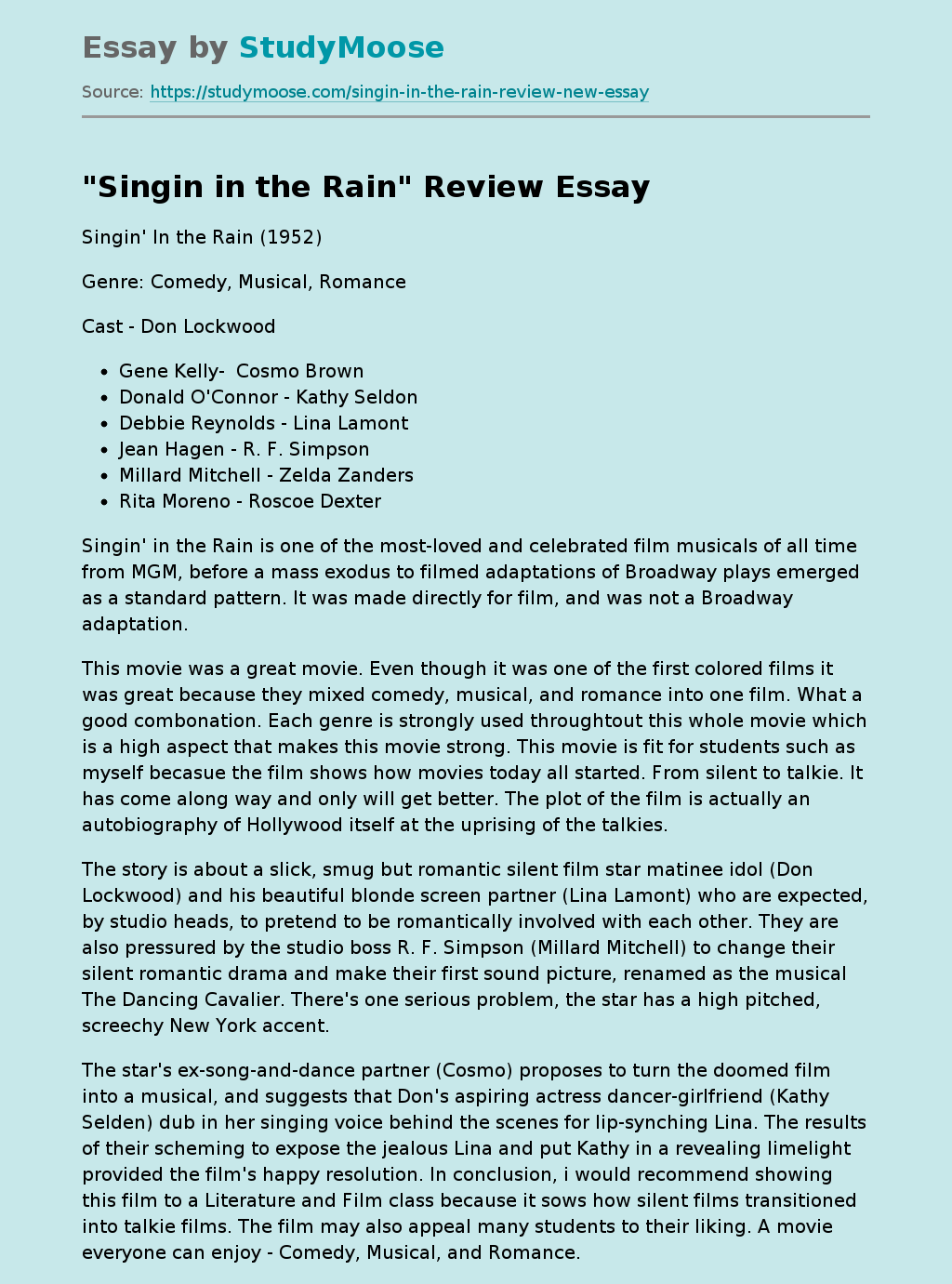