Introduction of the Case:
Carrefour was the second largest retailer of consumer goods and groceries worldwide, after Wal-mart. The company pioneered the concept of hypermarket in their home Country, France, as early as 1960’s.However, towards late 1990’s; Carrefour saw a decline in their French hypermarkets owing to certain unfavorable government regulations and competition from hard discount stores. Carrefour introduced a series of strategic initiatives in an effort to revamp the ailing French hypermarkets. As a result, French hypermarkets started showing signs of recovery towards late 2004.

Turn in your highest-quality paper
Get a qualified writer to help you with
“ Carrefour retailer ”
Get high-quality paper
NEW! AI matching with writer

The case discusses about the emergence and growth of hard discount stores in France. This case also provides scope for discussion of decline of Carrefour’s French hypermarkets and its revamp strategies.

Pedagogical Objectives:
· The state of Hard discount stores in France
· Impact of government regulations on French retail industry · Growth of Carrefour’s hypermarkets in France
· Revamp strategies of Carrefour hypermarkets in France.
1. How should Mr. Durant assess the opportunities in various countries around the world?
Mr. Durant, the new CEO since 2005, embarked on the new strategy by offering 15 percent new products in its hypermarkets and 10 percent in its supermarkets. Moreover, he wants to employ more staff, extend the operating hours in certain hypermarkets, cutting prices, trying small stores, and pushing down decision making. Mr. Durant aims to stay only in countries where Carrefour is among the top retailers.

2. Should Carrefour adopt Wal-Mart’s strategy of “low prices everyday”? What would be the advantage or disadvantage of such a strategy?

Yes Certainly they have to adopt the strategy of low pricing every day, In France, where Carrefour is well established, the company made the big mistake in its pricing policy.

It probably started with the 1999 merger with Promodes, the French discount chain. Carrefour confused the French clientele by losing its low-cost image. The new strategy which they want to implement discounts and cutting prices ,trying small stores certainly will help Carrefour to keep their competition in all over the world.

3. How could Carrefour differentiate itself from Wal-Mart?

Wal-Mart is more than just the world’s largest retailer. It is an economic force, a cultural phenomenon and a lightning rod for controversy. It all started with a simple philosophy from founder Sam Walton: Offer shoppers lower prices than they get anywhere else. That basic strategy has shaped Wal-Mart’s culture and driven the company’s growth. Now that Wal-Mart is so huge, it has unprecedented power to shape labor markets globally and change the way entire industries operate. In this article, you will learn the key reasons that Wal-Mart has been able to keep its prices low — cutting-edge technology, a frugal corporate culture and a push to make suppliers sell merchandise at cheaper and cheaper prices. We’ll also take a look at the scope of Wal-Mart’s impact on the economy and the controversies surrounding Wal- Mart, as well as the future of the company.

With 12 million loyalty card-holders in France, but also 7.5 million in Spain, for example, Carrefour group stores have an excellent base from which to forge closer relationships with customers. As a multi-format retailer, Carrefour can offer solutions addressing a wide variety of shopping habits. In 2009, the Carrefour group is enhancing its knowledge of customers, with the aim of serving them better and improving its brand image. In stores, the Carrefour brand will be conveyed in a way that is closer to the customer and more emotionally involving. By being more competitive, the brand will again become a tool for winning customers, enhancing customer loyalty and distinguishing Carrefour from the pack. In towns and villages, as convergence accelerates, the Carrefour brand will provide its best stores to more customers. In this way, Carrefour will make customers want to come, and keep coming, to its stores, regardless of the format or product offering. By focusing on retailing, Carrefour will become customers’ preferred retailer.

4. Identify cultures in selected countries that need to be considered in order to be successful?

The demographic environment presents both opportunities and threats for Carrefour. Increases in population size and household incomes help toexpand the market in which Carrefour operates. However, changes in the geographic distribution of populations, due to technological advances incommunications, may cause difficulties for Carrefour in determining profitable locations for new storefront

1.New markets had seen dramatic changes in consumer buying habits,coupled with high growth in per capita GNP,
2.suburbanization, greater participation of women in the labor force, and a large increase in theownership of cars and refrigerators.
3.The continued growth of suburban communities abroad is another major sociocultural trend.
4.Asian customers still tended to shop daily at wet markets or “mom & pop”stores.

5.Moreover, impulse buying was on the rise and replacing necessity purchasing.

6.Shopping as a form of leisure was an increasing phenomenon.

Carrefour has positioned itself as an international leader in the retail industry.Their strategies have proven successful for a number of reasons. First, they have beenable to successfully transfer competencies to associates and managers across the globe.Also, they have been able to adapt to local cultures and consumer tastes as necessary. Insome cases, they have even managed to change consumer tastes and buying habits. Theyhave succeeded in entering new markets aggressively and gaining a large share of eachmarket. Carrefour has even been able to restructure when legalities made it necessary.The question remains, then, what should Carrefour do in the future. Carrefour should remain in the retail industry. It should continue those practices that have provensuccessful and profitable in the past. Also, Carrefour should continue to leverage itsknowledge of international markets to continue its rapid expansion across the globe. Carrefour should, however, be wary of threats to its operations, and remain vigilant I exploring new ways to improve its products and services. Carrefour has come this far based on its ability to pioneer new retail concepts and should remember that this pioneering spirit is what will carry it into the future. 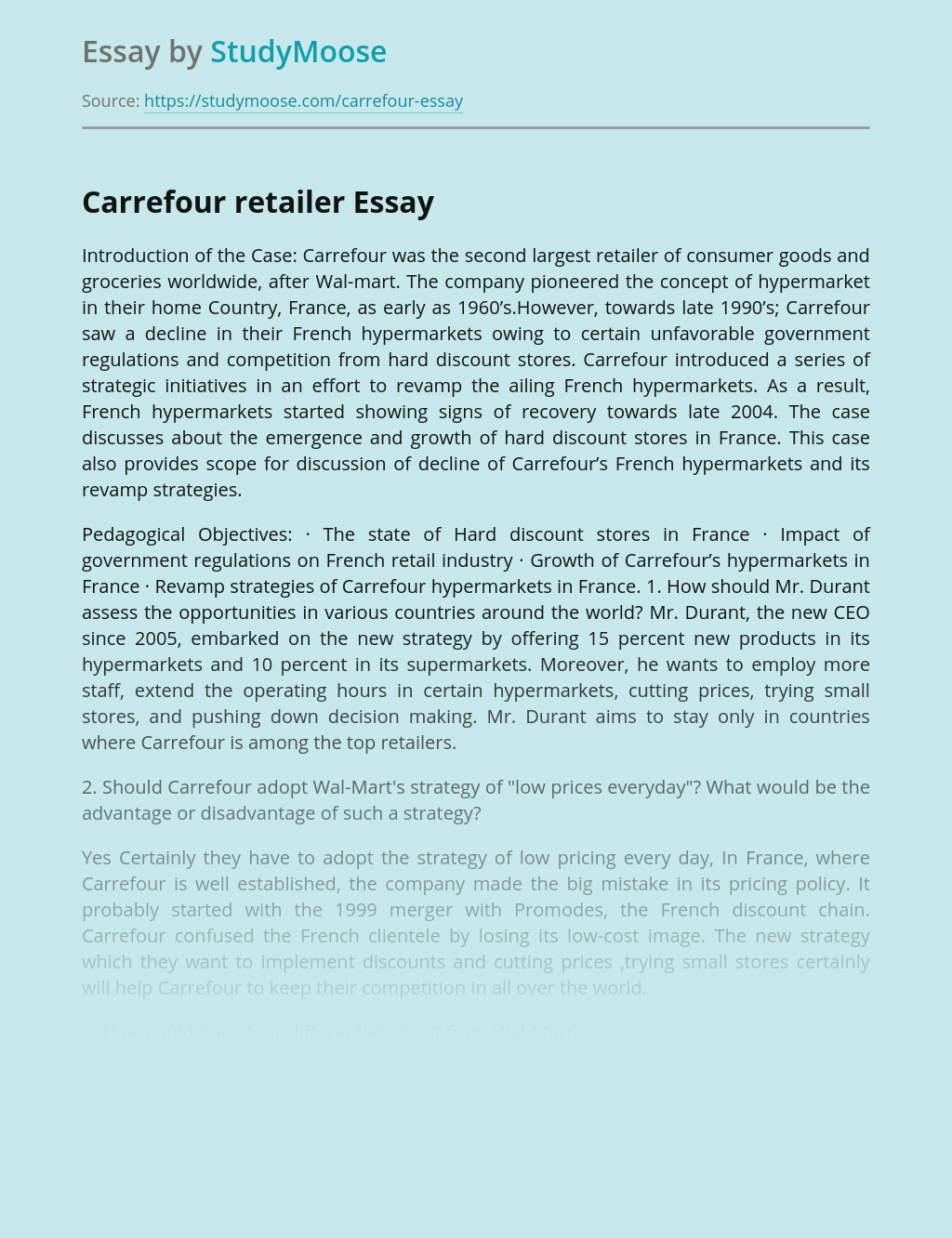 Turn in your highest-quality paper
Get a qualified writer to help you with
“ Carrefour retailer ”
Get high-quality paper
Helping students since 2015
Stay Safe, Stay Original