In the sad and deep poem of “Carpet weavers Morocco”, Carol Rumens portrays the lives of the children as tough and bounded by labour. She depicts this through uses of language features such as metaphors, similes and personification. She creates vivid images through the strong choice of words and adds feeling through language techniques.

Rumens, through the title of her poem is portraying a scene in Morocco, including carpet weavers. This establishes a theme of work which runs throughout the poem.

The title however, does not release and even give a faint concept of the major theme consisted of in the poem, i.e. of social injustice and child labour.

The poem begins with ‘The children’, thus taking us by surprise. Nowhere in the title was anything about children anticipated, the natural imagery developed had actually been of employees weaving carpets who had naturally been assumed as adults. Nonetheless, the poem starts with these presents of God, shocking us into the reality that the poem has to do with these intimate pure creations.

The first line of this stanza indicates that these children are hard at work on the ‘loom’ utilized to create the carpets. On the other hand it precedes the words ‘another world’, which could alter the meaning excited by ‘loom’ into that which is on the verge of, thus suggesting that the children were right around the corner of another world. The ‘another world’ here is denoting the distinction in the life of these kids to other regular kids, symbolizing their severe way of lives.

The word ‘loom’ can also be noticeably rhymed with the word gloom, therefore pointing towards the glum atmosphere of these kids.

This means that the child laborers are not like everyone else. They have matured earlier and have given up their childhoods in order to earn just enough money for all of life’s basic necessities. This world that they are in is not one many other children around the world are bounded to. Carol describes them to be of all ages and heights as she uses a metaphor in line three for “Their assorted heights would make a melodious chime.” The use of a musical instrument compared with the children gives an image of assortment. That their heights are varied and if lined up would look a little like a wooden wind instrument.

Their hair is shaped into ‘braids’ program that they have been twisted and trapped into this circumstance from where it is quite tough to decipher themselves. These braids are ‘black’ and ‘oiled’. This shows that they have actually been seeped and covered with problems, due to the fact that of which their lives have become ‘black’, i.e. darkened and glum. Still their ‘gowns’ are ‘brilliant’, which points towards their childish character, suggesting that they may not be treated as children, however the brightness and cheerfulness of their character is still present behind all these blockages. ‘Various heights’ assert that the kids are of various ages. By saying that they make a ‘melodious chime’ it is signifying that when usually kids of many changes accumulate together they play and their laughter produces a stunning music. Making use of the word ‘would’ however, reminds us that this is not the case here, as these kids are not provided the customary freedom supplied to a lot of kids.

The second stanza replicates the feeling of pity that had been aroused during the first stanza.

At the beginning of stanza two an important word is used ‘Flickering ‘it is used as onomatopoeia. The word flicker instantly reminds us of fast clicks. It is followed by ‘knots like television’. She gives an image of fast moving thread like the images on a television screen. In this line she uses a simile to give us that feeling of the children working very hard and looming quickly.  The children ‘watch’ their ‘flickering knots like television’, is a simile indicating that unlike most children who watch television with apt attention, these children watch the sparkling colours of these strings going in and out of the carpet board instead. In addition the only colour and sole entertainment in their life are watching these knots coming in and out and forming magnificent designs. The ‘garden of Islam’ signifies paradise and hence peace. It is also implying that the carpets being made are the Islamic prayer mats that are usually decorated with heavenly beautiful images of paradise’s gardens. By saying that this garden is ‘growing’ the poetess is trying to ascertain that as the carpet’s design nears completion, the children will be raised to reach the higher portions of the carpet. “As the garden of Islam grows, the bench will be raised”. This line introduces religion into the children’s lives. It adds more information to the children and gives us an idea of what their religion could be “Islam”. The carpets which they weave have scenes from the gardens in Islam.

On the other hand it could mean that as Islam grows, the burden on the children increases In addition it could be taken in the sarcastic manner to mean that as Islam grows instead of the justice system ‘the bench’, taking the side of the children it raises their benches so that they can finish more work, thus their state never becomes better. The children after being raised ‘lace’ the ‘dark-rose veins’ of the ‘tree tops’, shows that the children still put all their efforts, colours and enjoyment of life into the carpet. The specific colour of veins as ‘dark-rose’, state their delicate nature of the children which show in their carpet designs. Lacing these designs of the ‘tree tops’ show that the children are trying to reach the tops and the canopy of the world, but instead they are forced to replicate and design these high elevations instead of physically being able to reach them.

Stanza three tells us what happens to the carpets which the children make. That once finished it will go to the merchant’s truck to be sold most probably at a mosque (religious temple). The carpet then ‘travels’, and receives all the pleasure and comforts of travelling. Another language technique is used, personification. The carpet is also given the luxurious treatment in the merchants ‘truck’ as the merchant needs to take care of its products. Then it is ‘spread’ by the ‘servants’, denoting the royal treatment of comfort imparted on these carpets. The words ‘deep’ and ‘soft’ signify the sensation that arises from these carpets, and point out their comforts. This all shows that only the carpet is receiving the comforts, and only the carpet is seen and felt not the children or their hard work. The fact that it ‘gives’ when ‘heaped with prayer’ indicates that the carpet is the support and receiver of all the prayers. This shows that the carpet is the basic receiver of the prayers and not the children, hence emphasizing that nothing is being done about the state of these children.

Carol gives us more insight into the lives of the children in stanza four. The first line is powerful and very emotional as she finds common ground with the readers and the children. She mentions that “the children are hard at work in the school of days”. It means that the children do not go to school, that their only school is the hard work they do at the factory. It could also show some kinds of exploitation, for the beautiful carpets which they weave little money is given back to them. This adds emotion and enhances the readers connection with the poem, they will show sympathy for the children who are not given the opportunity to an education.

Line two indicates that the children’s small fingers are putting in color to whatever they make and all that ever will be is carpet. The poet states that ‘from their fingers the colours of all-that-will-be”, this phrase is actually emphasizing on the fact of kids being the future of the country, and the people who give colour and beauty to this harsh lifestyle. Nonetheless the use of the phrase ‘all-that-will-be’ comes to make us realize that this future is still yet to come, but the use of the caesura in between all the four words affirms the poet’s declaration that this is not possible and something is stopping this reality from occurring. Nothing else, their creativity is based around carpets therefore it shows that they will probably have no future.

“All- that- will- be” are strengthening words, used to enforce strength and power. “And freeze into the frame of all- that- was”. These colours of the children ‘fly’ from their fingers and try to reach the sky however, they ‘freeze’ and die into the frame of the carpet. She uses another language technique, Fly and freeze are alliterations and again the three last words are used for power. It means that the things the children weave or make will be carpet and that their future is ensured in weaving carpets. It is quite dark and sad as it symbolizes confinement and loss.

Carol Rumens, Carpet-weavers, Morocco, consists of three stanza’s each of the same length of three verses. Written in the second form, the poem barely uses any rhyming techniques except for once in the first stanza, ‘bright’ and ‘chime’. This rhyme impresses upon children happiness and how it takes the form of brightness and happiness in the world. The poem is basically evoking the dismal and serious atmosphere surrounding these children. The themes running throughout the poem is of childhood, work, social injustice, poverty and child labour. This has been achieved magnificently through the use of clever diction. 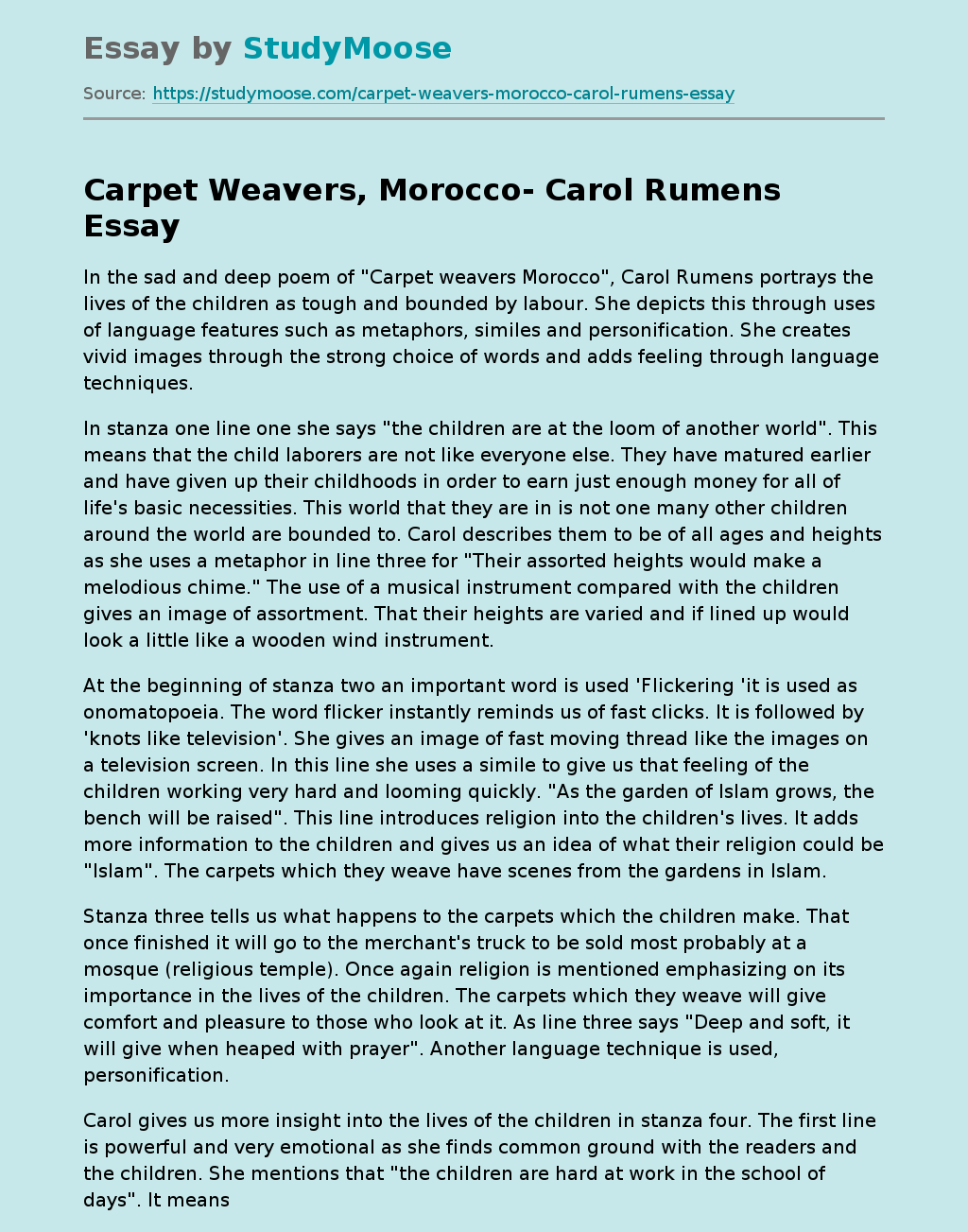