Captain America as a Rhetorical Superhero

Half of the person we become is an impression of the ones we admire. Growing up in the United States every child has someone they look up to. This most likely is an individual that represents success and the values we are taught to respect. Superheroes have always served as something good in our lives because they make us want to help the world and feel like we can do anything. Superheroes represent qualities that we should all attempt to embody.

Don't use plagiarized sources. Get your custom essay on
“ Captain America as a Rhetorical Superhero ”
Get custom paper
NEW! smart matching with writer

What Captain America truly represents can be interpreted in many ways, but there are messages being conveyed.

The authors of “Captain America: The First Avengers” use rhetoric to express the social ideology that being a hero is not exactly how strong you are, but what values and morals you live your life by. Captain America was created through a technological experiment on the capabilities of the human body. Dr. Erskine developed a serum that improves everything in the human body to help the Allied forces against the Nazis.

He was looking for the perfect candidate to create the flawless warrior; a man that exhibited opportune physical qualities, mental aspects and personality traits.

They chose Steve Rodgers, the complete opposite of a physical specimen, but the optimum mental applicant. He was courageous, honorable, kind, compassionate and a patriot. He was only a man trying to fight for his country in its time of need. These were the main traits Erskine was looking for. The serum would take care of everything physical, but would only improve upon his personality traits.

Any of the recruits could have been chosen and became superhuman but they were not the best fit. While the serum does make anyone have super human abilities, it also amplifies every trait of a person even the negatives.

This was the result for the first trial on Johann whose greed aggression and selfishness were amplified. Dr. Erskine explains it well in the movie: The serum amplifies everything that is inside. So, good becomes great. Bad becomes worse. This is why you were chosen. Because a strong man, who has known power all his life, will lose respect for that power. But a weak man knows the value of strength. And knows compassion. He is saying that a powerful man that becomes more powerful would be dangerous in this situation.

Steve was given the treatment and because of whom he was became the superhero Captain America and not another villain. Captain America can be seen as one of the most American super heroes there is. A weak man, looking completely emaciated, becomes the perfect image of a man. He grows in stature, size, and strength. He becomes the ideal heterosexual superhero. Steve comes from nothing, a small guy from Brooklyn, and becomes perfection. He gains superhuman power, speed and abilities, but still represents the honorable morals we are supposed to embody as a country.

This is why he was chosen, and this is also why he is so powerful. Steve represents the handsome, courageous, powerful and self-sacrificing American hero that many grew up admiring. It can be argued that Captain America represents the American mindset that values, morals, courage, perseverance and intelligence are more valuable than pure strength. I believe this is the imbedded goal of the film. The writer does well to illustrate this message. Along with other recent superhero action movies the objective is to entertain an audience, and obviously to profit.

The film could be improved in a few ways but is definitely pretty entertaining. Inlaid with these purposes a message from the writers to the viewers can be seen. The creators try to encourage the viewer to look past the physical driven society that we live in, and embrace our personal strengths. That becoming a hero is not exclusively based on strength and physicality, but our personality, intelligence, morals and values. For part of this central idea to be conveyed emotion is used. The writer’s use of pathos goes a long way to contribute to the central idea.

For this to be successful, Steve had to be belittled and then empathized by the audience before he could become great. The author does well to show him as courageous, but helpless. In the opening scene he defends the honor of the armed forces in the movie theater. This gets him into a fight and a beating from a much larger man. He does not back down from the man but is overcome until his friend jumps in. Right after this Steve is shown in his scrawny form trying to enlist where the folder displays how many flaws he has. In boot camp he is again shown as subpar in stature and strength.

It enables the viewers to relate to feeling insignificant and unworthy, or just ordinary. Once he is broken down it gives the chance for him to overcome everything. This aspect encourages the spectators that anyone can become a hero. Pathos is used to elaborate on the values that Captain America represents. He represents courage and sacrifice in the scene where he dives on top of the dead grenade to save the squad and also when he haphazardly invades to rescue the POW. The best example of this is the last scene of the movie where Steve flies the plane into the ice in order to save the city.

He wanted more than anything to continue his relationship with Peggy but gives that up for a better chance at saving everyone. Everyone can relate to him when they say goodbye over the radio. This makes the viewers relate to him and feel like they could be in the same position. All of this emotional appeal also serves another purpose. It points to the fact the Steve is still human after the experiment. The creator made sure to maintain this human connection to compassion. His love affair with Peggy helps establish this throughout the movie.

He never loses touch with his crush and his feeling of responsibility towards the rescue of his best friend is an example of this. The human aspect keeps the audience relating to Captain America so they feel they might be able to become a superhero based on their mental strengths. The writer maintains this human connection so the viewer does not feel alienated from the social ideology. The cast of Captain America contributes to the credibility of the movie. With stars such as Tommy Lee Jones, Chris Evans and Samuel L.

Jackson the film is viewed with more legitimacy. Another specific instance where ethos is used is the implication of Stark Industries from the Iron Man series. Tony Stark’s father is brought in to play a small role. This can be seen as reaffirming the social issue at hand. By presenting another “superhero”, (or reference to that of) that used his intelligence to develop superpowers rather than natural born strength, it supports this idea. Alluding to all the Marvel movies establishes more standing, which is a trend in many of these movies.

The writer’s use of logos helps create a more believable atmosphere for this normally unbelievable story. The story is set in World War II Nazi Germany. The viewer can find this recognizable and become more wrapped up in the story. They know the situation in Europe and begin to connect the dots. Anyone that knows a little about World War II can connect the fact that Hitler was probably the biggest supporter of technological advances during the war. All of the outlandish properties of the movie become a little more reasonable when related to Hitler in this time period.

The logos help establish a familiar setting making the story subliminally more believable thus making the social message more believable. Like most superheroes Captain America is the epitome of the heterosexual stereotype after the experiment. The chamber opens to show his now chiseled body all oiled up. He resembles a competition bodybuilder on stage covered in Vaseline to show even more muscle tone. While the central idea behind the movie was how physical strength is not as important, the producers still portray him as a sexual figure.

He stands for America’s hegemonic muscularity. Then generally women become attracted to him and most men want to be him. Captain America is full of symbols that contribute to what he represents in this movie. The fact that his uniform is red, white, and blue makes him represent the good of the country. Steve embodies all the attributes that are seen as favorable among our society as he represents the country. The shield may be seen as different things, but I feel as if it represents Steve’s courage for one, and also his “average joe” appeal.

A normal soldier might be able to have some of the same success equipped with and assault rifle and every resource made available by the army but Captain America doesn’t need that. All he needs is himself, a pistol and a shield. Captain America serves as a message to people that anyone can be a hero and that the physical aspect is not as important as values and personality traits. Superhero stories operate to empower and encourage the readers to better themselves and to do the best with what they are given. Rhetoric in this instance is used to convey these important messages. Superheroes act as a great role model and example for us all.

Captain America as a Rhetorical Superhero. (2016, Dec 20). Retrieved from https://studymoose.com/captain-america-as-a-rhetorical-superhero-essay 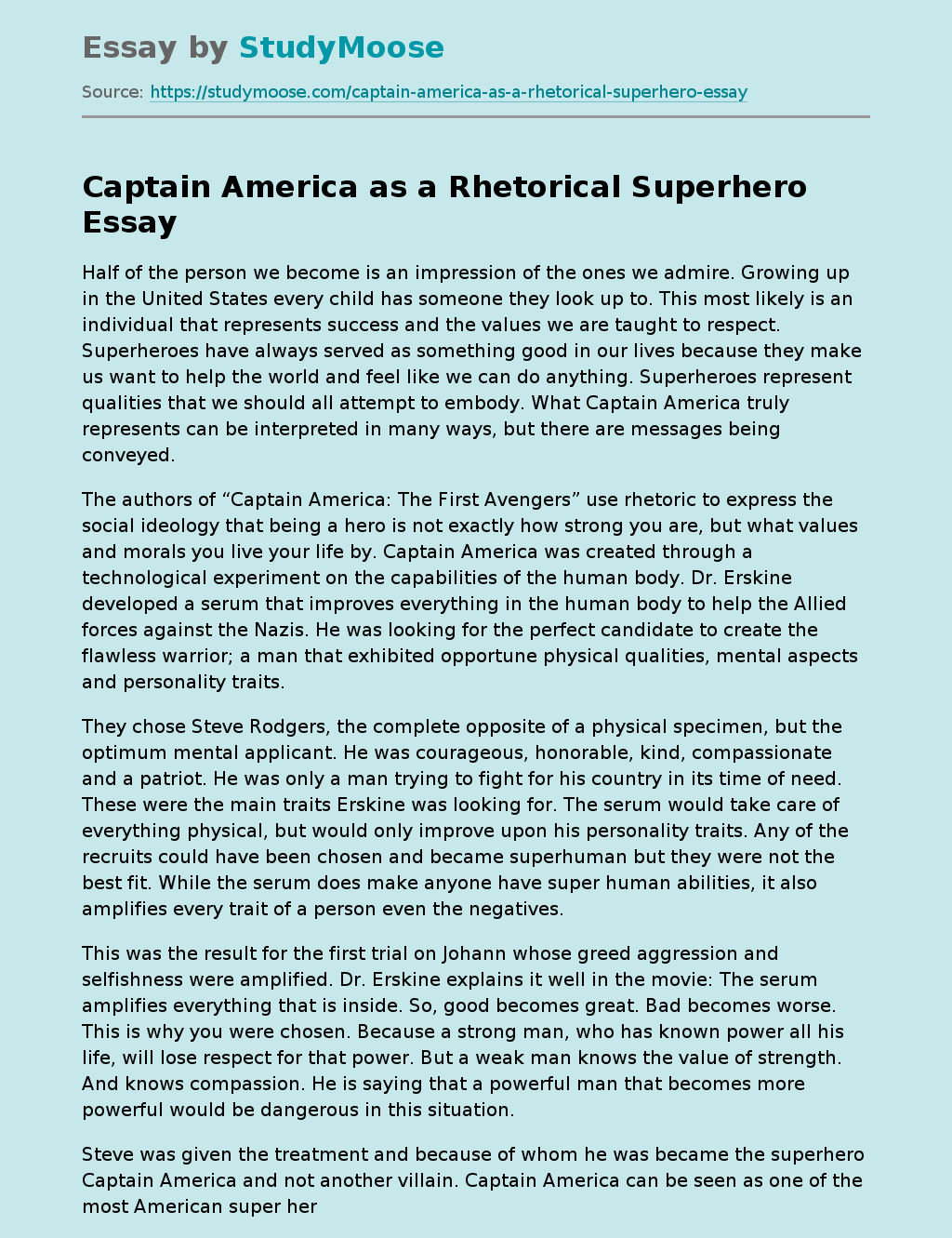