Capital City Bank (CCB) was a medium sized commercial bank owned by a small group of shareholders. Its total employee force numbered nearly 1,000 personnel. Because of the company’s poor performance in recent years, the owners decided to sell their equity to a group of new investors who felt that CCB could be turned around with more aggressive management. The transfer of ownership of the bank was followed by basic changes in bank strategy as well as changes in many key personnel, many of them at the top level.

The basic changes implemented by the new management of CCB included a more active pursuit of foreign financing activities as well as a heightened emphasis on lending activities to large corporate accounts. To better implement these changes in basic strategy, CCB was reorganized.

The reorganization of the bank involved the creation of two new divisions, namely, the Corporate Banking Division and the Trust Division (See Exhibit A).

The Corporate Banking Division was given the responsibility of marketing the different loans of the company to large domestic corporations, multinational corporations, as well as to the medium sized companies which had been the traditional clients of the bank.

A wide range of credit lines were offered to these accounts such as Direct Advance Line, Import Letters of Credit, Export Bill Purchases Line, Export Packing Credit Line, Domestic Bills Purchase Line, and others. Mr. Vicente Torres, a new recruit from a similar department in another bank in Metro Manila, headed this new division.

The Trust Division was charged with undertaking trust services for individual and business clients. A major service assigned to this division was the Common Trust Fund. This involved the pooling of funds drawn from various participants, investing this fund in safe and high yielding investments, and sharing the returns from the investments among the participants in proportion to the amounts contributed by each. The Trust Division was however to perform only the investment function. The marketing of this service to corporate and individual accounts was entrusted to the Branch Division. The latter also marketed the services of ten branches of the bank located around Metro Manila.

As a corollary to aggressive selling the various lending and trust services of the CCB, bank management also decided to undertake an effort to increase savings and other deposits in the bank. A deposit drive was launched involving all the employees of the company. A set of rules was drawn up such that all departments and sections of the bank, regardless of whether they performed marketing functions or not, were given points for new deposits brought in to the bank. The drive was to last for six months and the winners would be awarded attractive prizes and bonuses.

Towards the end of the year, one of the account officers of the Banking Division approached Oriental Company with an offer for working capital loan. Because Oriental had been banking with CCB for nearly a year, the account officer offered a P10 million working capital loan to Oriental at 18% rate of interest – at the time considered a “good” rate for favored accounts. Oriental considered to take advantage of the favorable interest rate offered and availed of the loan.

It was not until later in the year that Vicente Torres discovered the odd situation with Oriental. He called the manager of the Branch Marketing Group and asked “How could you allow your traders to offer a higher rate than our lending rate to Oriental? We not only lose money but we also look very foolish to our clients!” The Branch Marketing Group Manager replied that neither she nor her traders knew that the Banking Division had lent to Oriental at 18%.

What were the causes of the “odd” situation in the case?

THE NUMBER ONE CAUSE FOR THE “ODD” SITUATION IN THIS CASE IS THAT BRANCH MARKETING GROUP SOLICITED A CORPORATE ACCOUNT FOR A RETAIL ACCOUNT. IF THEY HAD WANTED TO OFFER THE PRODUCT COMMON TRUST FUND TO THE CLIENT, IT SHOULD HAVE BEEN COURSED THROUGH THE BANKING DIVISION WHO MAINLY TAKES CARE AND HANDLES CORPORATE CLIENTS.

THE ERROR OCCURRED WHEN RETAIL BANKING SOLICITED A CORPORATE CLIENT.

THIS SHOULD HAVE BEEN REFERRED TO THE ACCOUNT OFFICER HANDLING THIS PARTICULAR CORPORATE CLIENT.

What should CCB management do to avoid similar problems in the future?

THERE SHOULD BE DELINEATION OF DEPARTMENTS AND THEIR SCOPE. RETAIL BANKING DIVISION WHICH IS PRIMARILY THE BRANCH, SHOULD NOT SOLICIT ACCOUNTS BEING HANDLED BY THE CORPORATE DIVISION (BANKING DIVISION).

RETAIL BANKING DIVISION SHOULD CONCENTRATE PRIMARILY ON RETAIL CLIENTS EVEN IF A CORPORATE CLIENT HAS AN ACCOUNT IN THE BRANCH. CORPORATE CLIENTS ARE HANDLED BY ACCOUNT OFFICERS.

A CIRCULAR/MEMO SHOULD BE ISSUED STRESSING THE HANDLING OF CORPORATE AND
RETAIL CLIENTS. 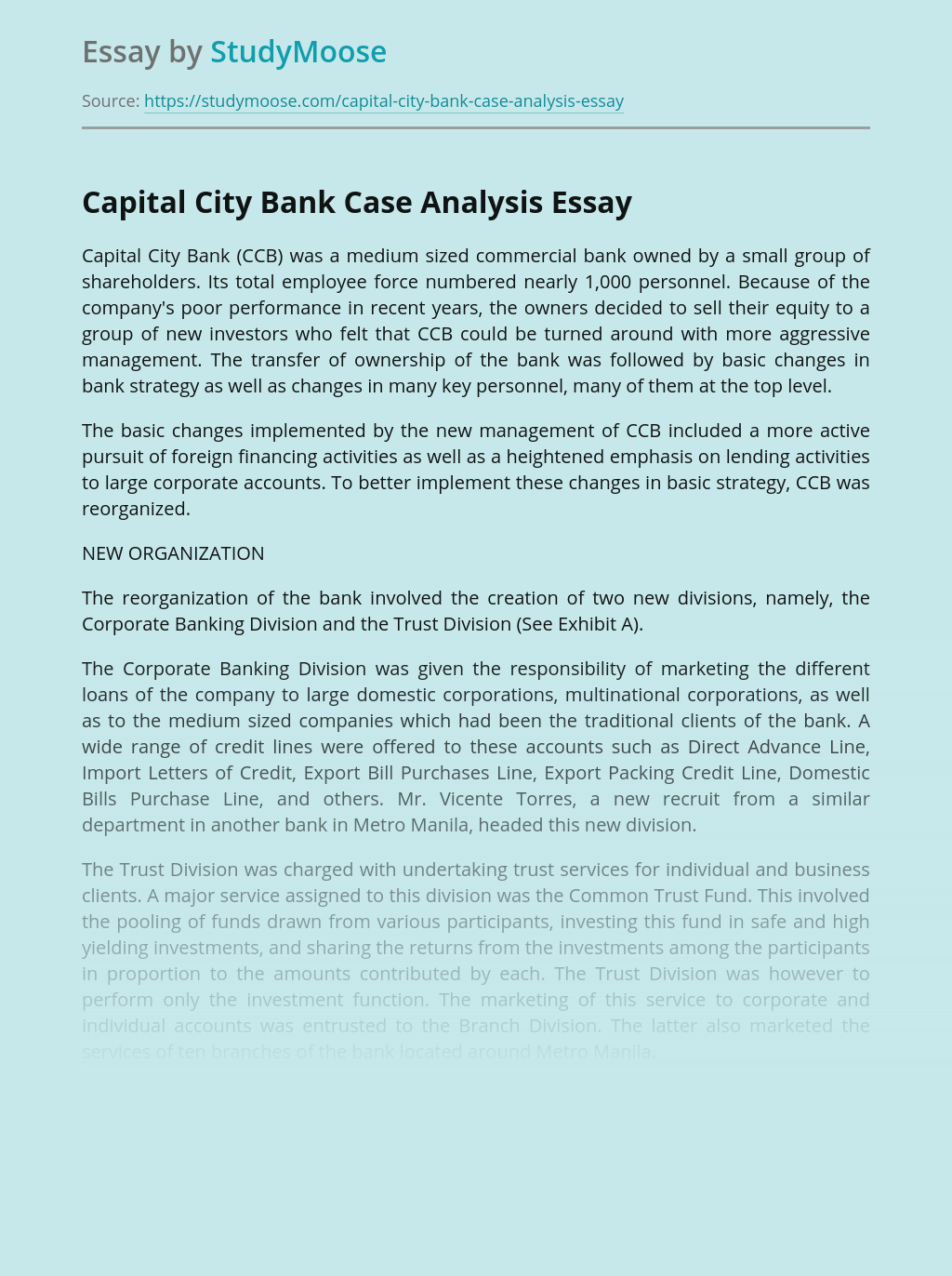 Cause and Effect Essay: Student Debt

The average cost of student debt is over $30,000 after graduation. Students make the decision to go to college to continue and pursue their education in order to get better jobs and eventually achieve their dream job. College is where students are able to get a feel of adult life and a small taste of...

Land of Bondage, Land of the Free

The tao does not come here tonight to be judged, but to judge, Hear then his accusations and his sentiments. I indict the Spanish encomendero for inventing taxes impossible to bear. I indict the usurer for saddling me with debts impossible to pay. I indict the irresponsible radical leaders who undermine with insidious eloquence the...

Summary of Realities. Butler Lumber Company is a Pacific Northwest based lumber supplier that sells plywood, moldings, and sash and door items. The sole owner of Butler Lumber is Mark Butler, accompanied by one administrative assistant and ten workers who focus on repair work and labor intensive work. Due To The Fact That of Butler...

1. What appeared to be New Century’s strategic objectives? Describe and evaluate the business model the company had adopted to achieve these objectives. New Century Financial Corporation was founded in 1995 went public in 1996 and was also listed on NASDAQ. New Century’s primary goal was to originate and sell subprime mortgages. The main activities...

Introduction O.T.T. Incorporated, principally engaged in the manufacture and sale of clothing, has six investments remaining in the department’s portfolio as of December 31. According to ASC, this memo analyzes whether any of its investments are other-than-temporary impaired, and determines the amount of the impairment. Facts Investment 1 — Happy New Year & Co. OTT...