Diageo was created when Grand Metropolitan, plc and Guiness, plc merged in 1997. While the Diageo name is not well known to consumers, its brands are among the most famous including Guinness, Smirnoff, Johnnie Walker and Cuervo. The company recently decided to focus on a strategy to grow through its spirits, wine and beer businesses and divest of its Pillsbury and Burger King subsidiaries. This case study will focus on the proposed capital structure decisions of Diageo.

Is Diageo’s current capital structure appropriate to its new business? It believes that it has traditionally had a conservative debt policy.

Don't use plagiarized sources.
Get Your Custom Essay on Diageo Capital Structure Case Just from $13,9/Page

The interest rate coverage ratio that it has been targeting is between 5 and 8 x and they currently have a ratio of 5 (Exhibit 4). This ratio is low compared to the average Alcohol (8), Beer (10), and Beverage (13) segments. Below is Diageo’s current interest coverage ratio compared to its competitors:

Having a conservative debt policy increased the credit worthiness of the firm. Because the firm believes that the interest coverage ratio is a critical factor for credit rating agencies, they attempted to keep this ratio very high. Also, by having a higher credit rating they are able to access short term commercial paper borrowings at better rates. This type of short term borrowing makes up 47% of Diageo’s portfolio. By not having a strong credit rating they would not be able to lock in the low rates which would impact their business significantly.

What recommendation is the firm’s trade-off model for Diageo’s future capital structure? In order to maintain its credit rating, Diageo’s Treasury team recommends an interest coverage of 5x to 8x, but the simulation-based model calculated an optimal interest coverage. Figure 2 shows minimal cost corresponding with an interest coverage of approximately 4.2. Shown in the gray bars, the cost of taxes paid decreases as EBIT/Interest increases. A decrease in interest due to debt lessens the tax shield benefits available to the firm, so the cost of taxes decreases as we move along the x-axis of Figure 2. However, as the firm increases its debt, its potential cost of financial distress also increases. Considering variables such as: Local EBIT, Interest Rates, Foreign Exchange Rates and Market Conditions, the model predicts a minimum cost at a 4.2 interest coverage.

Does the Model Capture all Important Risks Faced by Diageo?

The model does not fully explore the risks associated with doing business across a vast international market. There is risk due to political factors that the Diageo team did not take into account. Also, the model assumes a constant tax rate, and there is no guarantee that Diageo will not experience fluctuations. These trials figure a 20% reduction in value of the firm as a result of financial distress, while Richard Passov’s article How Much Cash Does Your Company Need? calls out a 30% reduction in value for Branded Consumer Goods. If that estimate is accurate, Diageo should adopt a more conservative capital structure to compensate. 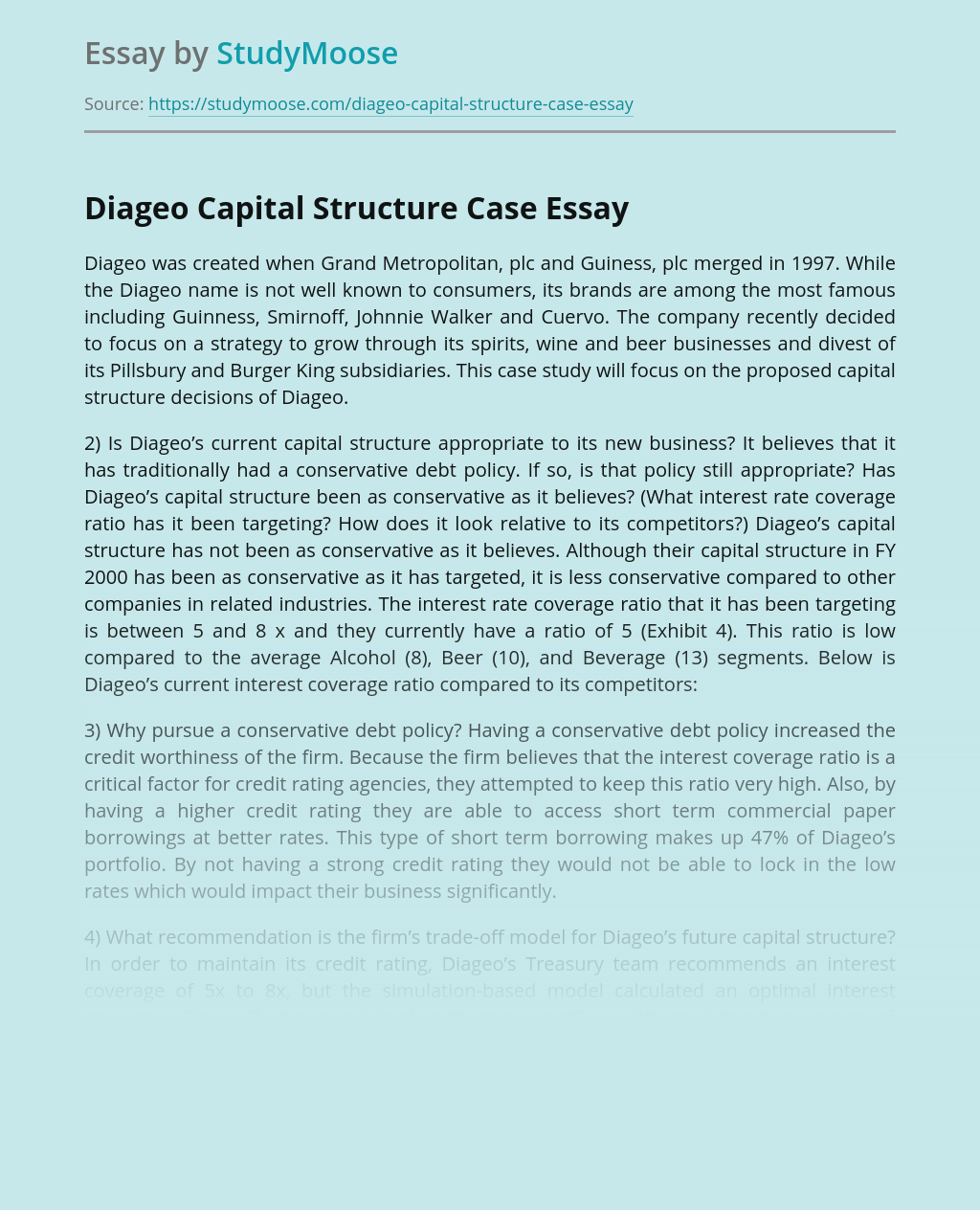 What remains to be seen however, is whether shareholders are better or worse off with more leverage. Problem 2 does not tell us, because there we computed total value of equity, and shareholders care about value per share. Ordinarily, total value will be a good proxy for what is happening to the price per share,...

Get Essay
Inside Job Documentary Film

The online market for travel services will reach $63 billion within a few years, and Priceline.com aims to capture a significant share; already, it is high on the top-ten list of travel Web sites. After a brief period of diversification into name-your-price sales of groceries and gasoline, the company has refocused on its core travel...

LEI’s expected net income this year is $34,285.72, its established dividend payout ratio is 30 percents, its federal-plus-state tax rate is 40 percent, and investors expect earnings and dividends to grow at a constant rate of 9 percent in the future. LEI paid a dividend of $3.60 per share last year, and its stock currently...