Canned Hunting as a Sport and a Right

A businessman is always on the look-out for a lucrative money-making scheme. A good businessman will be able to spot a business formula that can generate a very good return on investment. And since the beginning of entrepreneurship history, the best way to do all the above is to find out what the paying customer truly craves, then the astute business person will do everything to supply that much needed product or service. In a recent report in the world of game hunting innovative businessmen are now trying to package an irresistible offer to thrill-seeking city folks who would love to go hunting and collect their trophy but do not have the time nor the necessary skills to go on a full-length safari.

Don't use plagiarized sources. Get your custom essay on
“ Canned Hunting as a Sport and a Right ”
Get custom paper
NEW! smart matching with writer

There is therefore nothing wrong with “canned hunts” and that every state must have one.

This paper will take a closer look at “canned hunts” and examine the reasons why every state in America must support this type of businesses.

For starters it is a sound investment that generates income for the state and provides jobs for many Americans. Furthermore it is a sports-like activity that relieves stress for many city folks who are hunched down in their computers and can find no suitable exercise that can excite them to go the extra mile in terms of walking and exerting effort that will in turn strengthen their bodies.

For thousands of years man has provided food for the family through the use of his hunting skills.

It is a great sense of responsibility combined with daring that he will traverse the off-beaten track to hunt for prey. In his desire to feed his family he would go the extra mile and at the same time hone his skills so that at the end of the day he will not go home empty handed. Hunting can be in the form of whaling, fishing, trapping or shooting down prey with a spear or an arrow.

No matter what method and no matter what was the target humans living in antiquity relied on their skills to provide not only for their families but also as a means to trade with others. Hunting for the sake of gathering not only meat but skins of the animals provided an extra source of income. Furthermore, fur and other leather products that came from hunting expeditions are useful for keeping the family fully clothed for the rest of the year. In some cultures the skins gathered from hunting expeditions can be used to accentuate homes or to improve its capabilities to protect wife and kids from the elements.

Hunting is simply not a job but a way of life that ensures not only a steady stream of food supplies and other materials that can be used to generate money or a means to trade with other much needed items that are not available locally and can only be secured by meeting with other people groups and culture. In short hunting kick-started trade and industry since ancient times. Hunting is therefore a part of human life, the integral part of human civilizations.

It is a sad fact that after the Industrial Revolution men began to move into cities. In just a short while these workers made a way to bring their families down to where he is working and as a result created mega-cities in a very short while. Mass migrations from farms to the urban centers such as New York and Chicago became the norm. But aside from exchanging farm skills with factory skills there were so many intangibles that were left in the farm and this includes the ability to track down and hunt prey.

After more than a century of living in cities, man grew accustomed to the comforts of urban living. In this artificial world where meat is processed and where fast-food is the norm the skill of hunting slowly disappeared. It used to be that a man knows his why in the forest. And it used to be that there is nothing about the jungle that will scare him, able to survive the harsh elements and able to hunt and gather food if the need arises. But in the 21st century a teenager lost in the woods may dies of hunger and thirst and unable to find his way out from the wilderness.

It is not the goal to make every city folk to become some sort of a Robinson Crusoe or a David Crockett who can survive when shipwrecked in an island or who can build shelter in the woods even if armed only with a small knife. But the bone of contention here is that Americans are beginning to totally lose their connection with their heritage. Furthermore, there is no reason why modern day Americans are supposed to totally forget these skills. Aside from that sedentary living is the leading cause of heart failure. According to the World Health Organization it is physical inactivity that leads to obesity, high blood pressure, and renal failure (WHO, 2002).

Now, the challenge is to encourage everyone to go out and flex their muscles and strengthen their heart by doing manually taxing work. But as this statement implies there are less and less people getting excited with the idea of going to the gym and perform mindless tasks such as lifting some heavy pieces of metal or running in place without having the benefit of changing scenery. Simply put, a large number of the population does not want to exercise because it is one of the most boring activities. Surely after the initial payment for membership in the local fitness club there is that high level of excitement prompted perhaps by the knowledge that a minor investment has been made in paying for the right to go there and use their facilities. But in less than a month this new found zeal for physical activity dies down.

It is therefore important to find ways to make the average city dweller to stand up from his couch, leave his home and do some serious physical exercise. If there is a progrm or activity that encourages a good number of Americans to take a vacation, close down shop, leave the home to commune with nature and breath the fresh air of country life then that program must be supported.

Now one of the activities that draws the crowd is sport called “canned hunting” which is actually customized hunting. This so called “canned hunting” is usually found in ranches where the owner provides the chance for the uninitiated to develop their hunting skills. According to Tatalovich and Daynes, “Such ranchers offer hunters a guaranteed kill, an abundance of well-fed animals … year round open season, and the opportunity to use a gun, bow and arrow, or spear” (p. 71). But not everyone is happy. Animal rights activists are enraged by this practice and the pointed out that animals are fenced and do not have the chance for “fair-chase”.

It is the right of the individual to earn a living and to make a decent amount of money within legal bounds. Now, “canned hunting” is legal in many states which is simply one of the best arguments in favor this business practice. The law of the land cannot find anything wrong with this practice. The Humane Society of the United States one of the organizations actively lobbying for the banning of canned hunts acknowledge the fact that most states allow this canned hunting and that there is no federal law that limits this practice. This means that all the objections against it can be labeled as mere opinions and if a fair and objective judge can see the whole picture he will come to the conclusion that it is the right of the person to hunt.

It is the right of every man to hunt. It is a skill and an activity that has been part of the American heritage. It is a skill that helps build civilizations and one that initiated the trading industry. It is a skill that provided for the family for thousands of years and therefore there is no reason why Americans should forget the ability to track down and hunt prey.

It is also important to understand that the growing death rate due to physical inactivity is a heavy burden carried by American society. It is therefore imperative to encourage everyone to go out and do strenuous physical exercise in order to combat the deadly effects of being a “couch potato” but if the average American will go out there and find that there is nothing available except for the boring and sterile gyms or fitness clubs where the participants are asked to mindlessly lift a heavy chunk of metal then it is understandable why many prefer to stay home.

Now, “canned hunting” may not sound very pleasing to the ears but it is the closest thing that a novice hunter can get to real pure action hunting. Based on business figures coming from the Midwest especially in Texas this business is now a billion dollar industry, it is legal in most states and that it entices city folks to leave their homes and stretch their muscles. There is therefore no reason why the government should ban this practice.

Canned Hunting as a Sport and a Right. (2020, Jun 01). Retrieved from http://studymoose.com/canned-hunting-as-a-sport-and-a-right-essay 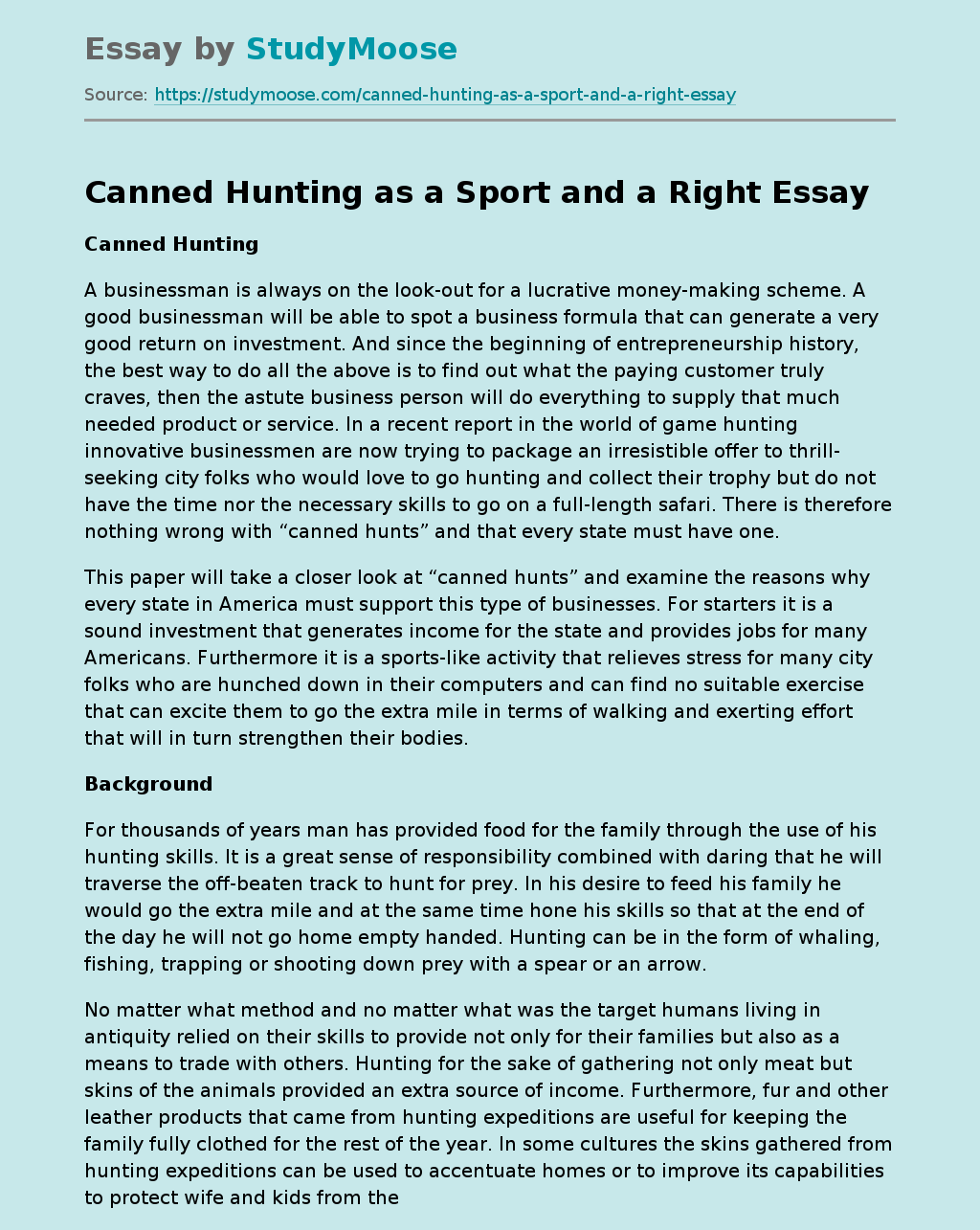