Canada and the United States Policies

I argue that Canada and the United States have been governing with similar policies throughout the 2000’s, no matter which leader or government. We elected President George W. Bush in the U.S. and Prime Minister Stephen Harper in Canada, both belonging to conservative and/or right-wing parties. After Bush met his term limit and Barack Obama was elected, Harper was eventually defeated by Justin Trudeau.

Trudeau and Obama were seen as similar and were even perceived to have a ‘bromance’, with Obama famously endorsing Trudeau in his bid for re-election in the 2019 Canadian federal election.

Don't use plagiarized sources. Get your custom essay on
“ Canada and the United States Policies ”
Get custom paper
NEW! smart matching with writer

The two were perceived as similar perhaps because they both governed on comparable centre/centre-left platforms/policy. As the Feaver and Popescu reading states, Obama’s policies were largely continuations of Bush-era policy. Canada followed the same trend with Harper to Trudeau. Canada’s foreign policy on Israel is a key example as the Liberal party was accused of being anti-Israel in the past (mostly by Harper), yet Trudeau’s policies are of great similarity to Harper’s.

Additionally, the Conservatives and Liberals repeatedly vote together on matters pertaining to Palestine and Israeli-Canadian relations, such as their condemnation of the Boycott, Divestment and Sanctions (BDS) movement. Moreover, although it doesn’t pertain to foreign policy, it should be noted that Trudeau (who, like Obama, campaigned in both elections with climate action in his platform) approved more oil/gas pipelines than Harper ever did, which categorically doesn’t fit with his climate action narrative.

Trudeau even ok’d the Keystone XL pipeline, which was vetoed ironically by Trudeau’s (apparently) close friend Obama: a veto that was later overturned by current U.

S. President Donald Trump, a move commended by Trudeau. To conclude, Canada (and the U.S. alike) do not seem to drastically change their (foreign) policy, and the notion of real change has yet to occur.

Canada and the United States Policies. (2016, Feb 24). Retrieved from https://studymoose.com/canada-and-the-united-states-policies-essay 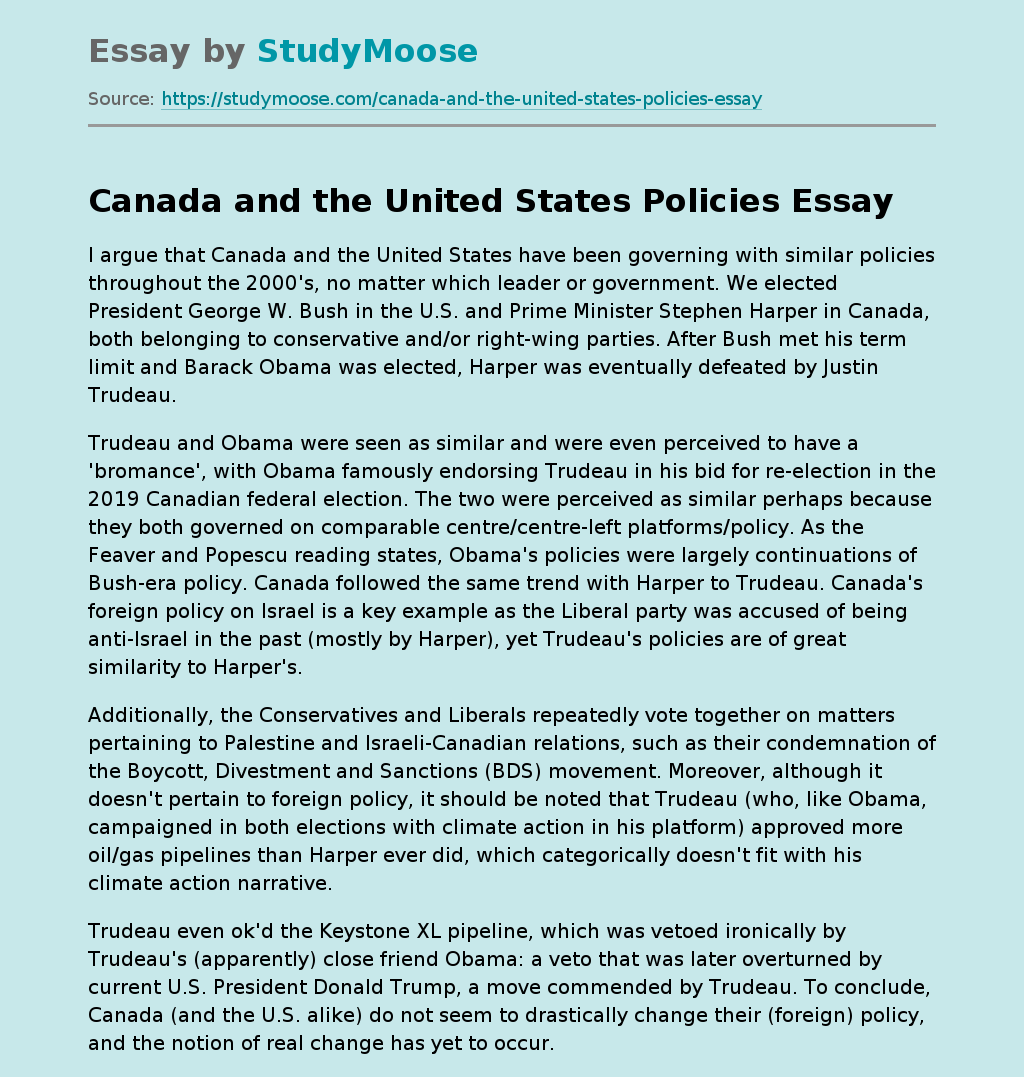