A few years ago, my company decided to hire a man of Middle-Eastern decent to fill an open project engineering position. The gentlemen exemplified what the company wanted and needed in an employee. He had the educational requirements, work history, and years of experience in our manufacturing field. He shined during the interview process and stood head and shoulders above the other candidates. My company wasted no time making the man a reasonable offer and he gladly accepted soon afterwards. Within a few months after his arrival, the gentleman was tasked to lead a project to install an aseptic blend operation.

The aseptic blend operation had some strict personal hygiene requirements. One critical requirement was no employee could don a beard when working in the blend area.

Ironically, the gentleman sported a full lengthy beard in which he wore proudly as part of his Middle Eastern culture. Eventually, an unexpected ethical dilemma was on the rise. My company was caught between asking the man to shave his beard, assign another engineer to the project, or amend the requirement.

After a few weeks of laboring over this problem, my company decided it would be in the best interest of all parties involved to allow the man to keep his beard and still lead the project. To do so, my company researched and was able to source large aseptic-acceptable beard nets. The gentleman was open to the idea of wearing the beard nets and the project was completed on time.

The virtue, value, and moral conceptual issues in this ethical dilemma were also of interest.

In terms of virtue, this man’s character was never in question. He was neither right nor wrong but was simply adhering to his cultural ways. In terms of values, the man’s personal values differed from those of the company’s. The man valued his culture and held it in high regard. As a result, he made a choice to sport a beard that signified his culture and ancestry. On the other hand, the company initially valued their policies. Yet, the company eventually decided to change them to honor the man’s values. Morally speaking, the virtues and the values of the company and the man were not aligned thus causing an ethical dilemma. Neither of the two was right or wrong but simply had different beliefs.

There were several ways in which external social pressures influenced business ethics in this situation. For example, when local Middle-Eastern delegates found about this ethical issue they became irate. They threatened to boycott the company’s products, protest outside of the company, and pursue a lawsuit. The local ACLU, The American Civil Liberties Union, spoke up against the company’s policies as well. Although they didn’t threaten any actions, their mere presence was enough to sway the company to change its policies. Finally, social pressure form the many Middle-Easterners within the community, county, and state weighed heavily on the company. These external social pressures along with internal pressure from employees were too much for the company to ignore. Again, as a result, the company amended its aseptic operation polices.

If I was a company and was faced with the same dilemma today, I would have arrived at the same solution. Personally, in this situation, it would be better to amend a policy by finding suitable solutions, than it would be to stand firm. The company did the right thing by finding and purchasing acceptable beard nets rather than fight a lengthy battle in the judicial system and the court of public opinion. Therefore, I would have done the same thing today. If I was the gentleman in this situation, I would have done exactly what he originally did; stand firm and work towards to solution in which all parties are satisfied. I would not have decided to cut my hair because that would have violated my cultural values and personal value system. In the end, the solution was amicable to both the gentleman and the company.

This ethical dilemma, although rectified in a reasonable fashion, brought to light other policy issues within the company. As a result, the company hired an ethical officer who oversees all policies, rules, and procedures. Also this individual helps orientate new hires who cultural ways and values are not easily recognized. This has helped the company become more cultural diverse and more cognizant of others who values differ from the majority of the workforce 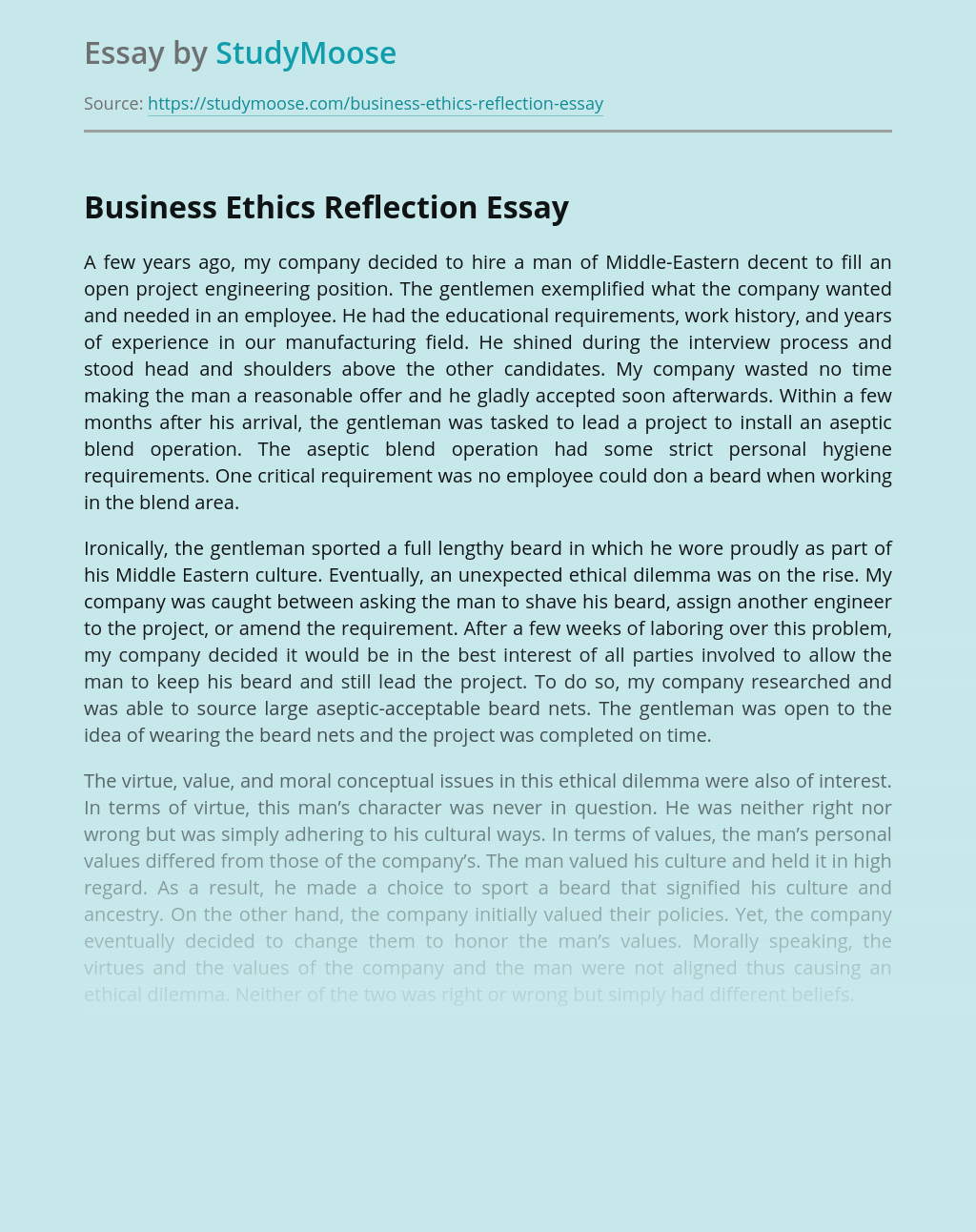