Circumstances around the Brown V Board of Education lawsuit that made it to the Supreme Court, was due to a lawsuit that stated a child was being denied access to a school that where black students were not allowed to attend and that the black school and the white school were not equal and therefore their 14th amendment rights were being violated. The Supreme Court agreed to hear this case, they did not agree at first and were divided on how they were going to rule on the case, but circumstances changed as to one of the Judges who was going to stand on the Plessy Verdict opinion, which was they could be “separate but equal”, passed away and a new Judge was appointed to the Supreme Court.

Don't use plagiarized sources. Get your custom essay on
“ Brown V Board of Education – Supreme Court Decision ”
Get custom paper
NEW! smart matching with writer

The Plessy V Ferguson was from a Supreme Court Ruling in 1986. Brown V Board of Education Argued December 9, 1952 and came to a decision in May 1954 declared that “separate but equal” has no place in schools and that the segregated schools are unequal.

They ruled that the child was not being allowed to prosper and was not being treated equal, according to the 14th Amendment which states that all citizens are not to be deprived of life, liberty or property and equal protection of the law. The Supreme Court issued a second opinion regarding this case, which ruled that future desegregation cases to the lower district courts and state school boards and wanted them to act fast with deliberate speed in moving forward with desegregation.

The ruling of this case and the second opinion to this case was taken well within some states, particularly a city in Arkansas that was going to be definite and not allow black students into their all white school. The current governor at the time, Orval Faubus called out Nation Guard for the state of Arkansas and was preventing black students from entering the school of building of Little Rock Central High School.

Due to the action of the governor of Little Rock, Arkansas this created a tense situation and a standoff was created, this made National History. President Eisenhower brought in the Federal Troops that would keep peace and safety and allow the nine black students to attend and enter the building of the school, which would later be referred to as the called the Little Rock Nine and is still referred to this day in history, movies, and newspaper articles. During this time period Several Protist were going on as well throughout several states and this brought on several Civil Rights Movements. The Civil Rights Act of 1964 started a domino affect of other rights, like the passing of the voting right of 1965, that allowed African American Right to Vote, according to the 15th Amendment, next there was the Fair Housing Act of 1968 which prohibit discrimination in housing based on race, color, sex, and national origin, or region. The acts along with Brown V Board of Education started seeing people for people and not the color of their skin, and that all people should be treated equal. ConclusionThe implications of the Supreme Court Descension of Brown V Board of Education allowed no one to be deprived from an equal education, this also brought on many Civil Rights movements that prevented discrimination in housing and voting. This also allowed African American teachers to teach in any school as well. 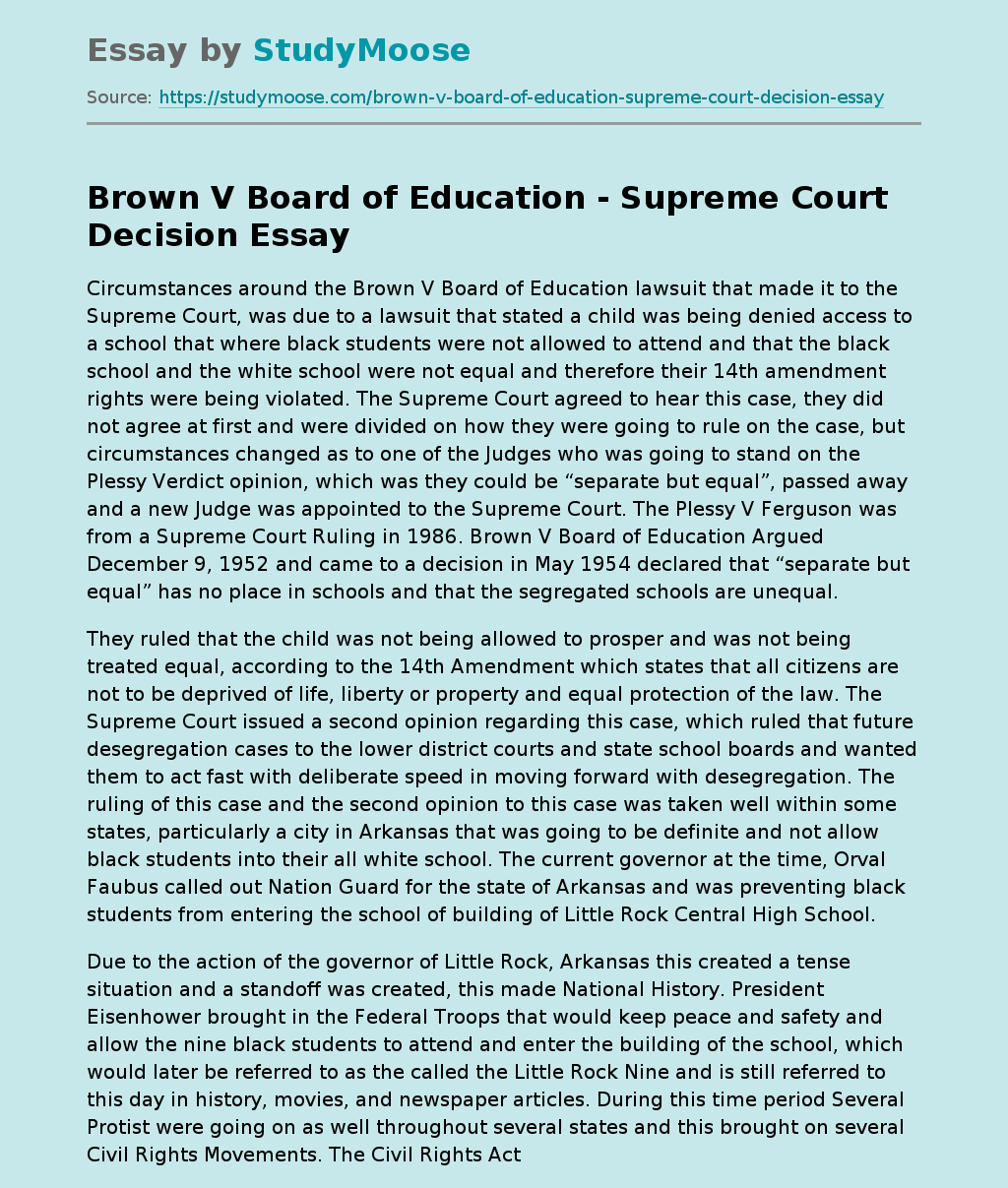