Broken Family as a Component of Society

Family is the basic unit of society. This is the most essential component of a country. A home is where a family lives. It may be alternated to the word ‘house’ but a house is more appropriately referring to the material structure, whereas ‘home’ refers to the intangible things that bind together the family members. It is the immeasurable love and care that keeps together the mother, father and their children. However, no matter how ideal a family in the terms of their relationship, there are still hardships and misunderstandings that will come along the way.

Don't use plagiarized sources. Get your custom essay on
“ Broken Family as a Component of Society ”
Get custom paper
NEW! smart matching with writer

It is just part of any relationship anyway. But, the sad part is when one of the family members gave up and the others have no choice but to accept and let go. Thus, the family starts to be broken.

A broken family is one where the parents (mother and father) of a child or children have split up and no longer share a single family home as a family unit.

This is also known as a broken home. Have you ever heard the expression “A family who’s eats together stays together”? Well, that is true, but and emotionally broken up family means that the family has grown apart, fights all the time, doesn’t get along. It doesn’t just take a toll on the family, it takes a toll on the family members. No one wants a broken home. Even if they say they do. Broken family is a major problem of the society that should be given enough attention.

The behaviour of family setup affects the social, economic and political aspects of a country. It should not be taken for granted as if it will fix the problem on its own. Unconditional love and eternal care should be the foundation of every family. It should always be remembered to keep the family away from the thoughts of separation.

The Reasons for the Broken Family

Too many arguments that might lead to divorce and the parents divide their children. But I believe its mostly cause by drugs or money. Too much money leads to arguments and greediness which causes to forget about love and divorce. Too poor leads to depression and arguments and feels like they have to split up and start over. Drugs messes with someones head and they mostly die or the family leaves that person behind for the cause of the children’s growing. But its not all parents, some teenagers runs away from home, of course, with their own reasoning. Some parent’s children die and it causes them to split. For the cause of the child’s growing, they divorce and find some place else. Or sometimes, its work. Not working too much or a workaholic may lead up for a broken family. Or if someone dies, then of course they’re broken inside the most.

The Impact of the Family on Man

A broken family is believed to be a cause of a child’s mislead in life, some people give it as the main reason of the rebellious and unclear acts of a person. Meanwhile school is another factor which molds us on becoming a good person. Separation, family problems and misunderstandings from the family are the major causes of single – parent or broken families.

When they saw a happy family they feel depressed moods seems to arise from within. They depression feels unpleasant, inconvenient, and unacceptable. Some of the students come from broken family as well. This research helps the reader to understand the role of good relationship of parents on the behavior of a student. Broken Family can affect the behavior of a student. But the students who come from broken family have different behavior and different principle in life. It also show us the different ways of the respondents on how they overcome their situation.

Children whose parents split in this generation are more than four and a half times more-likely to have developed an emotional disorder than one whose parents stayed together. Several findings said that children’s family backgrounds are as important – if not more so – than whether their home is poor, workless, has bad health, or has no one with any educational qualifications. The effects, however, are more focused on the children. Premarital sexual activities is one of the major effects of splitting of families, sometimes with only one parent guiding, the child has more chance of rebelling against his/her parent. Also, increase in financial problem, hatred and anger builds up from families who experience distraught in their relationships.

Education is also an area wherein stark differences in the outcomes for those who had been in a broken home are created. According to Lann (2010) for 18- to 24-year-olds, 62 per cent of those who experienced parental divorce/separation during their childhood completed 12 years of education compared with 77 per cent of those whose parents did not. Hence, this study was conducted in the College of Computing Education Department in University of Mindanao in order to evaluate the effects and to determine what student do to lessen the suffering of having a broken family, and how to overcome the effects on their academic performance.

Children need to have both parents in the home to have a balanced life. Both socially and mentally but, if the parents cannot get along and the children are being raised in a constant battleground, socially and mentally this can be more damaging to them. This can lead to trust issues and other relationship problems. Parents who abuse each other will most likely have children who will become involved in abusive relationships. Children whose parents have divorced and the absent parent are still involved in their everyday life still benefit from both parents.

But most importantly the child needs to understand that their parents’ divorce or break up was not and never will be their fault. Divorce is hurting American children very badly. Each year over a million children suffer the divorce of their parents and by 1999, half of all American children reaching their eighteenth birthday and who were born to married parents will have experienced the divorce of their parents. The reversal of the legal status of divorce will entail nothing less than a cultural revolution because American culture now embraces divorce in law and in behavior. It’s easy acceptance once rejected as scandalous.

Even if they themselves have divorced the men and women who shape popular opinion, as well as the policymakers in state legislatures who are responsible for domestic law should begin to challenge this practice. The devastating effects of divorce on children just might provide these leaders with the motivation to start such a cultural revolution, or at least to question the direction the nation has taken. The plight of children may give Americans the moral courage to overcome a fear of raising this delicate subject.

Broken Family as a Component of Society. (2017, Jan 20). Retrieved from https://studymoose.com/broken-family-as-a-component-of-society-essay 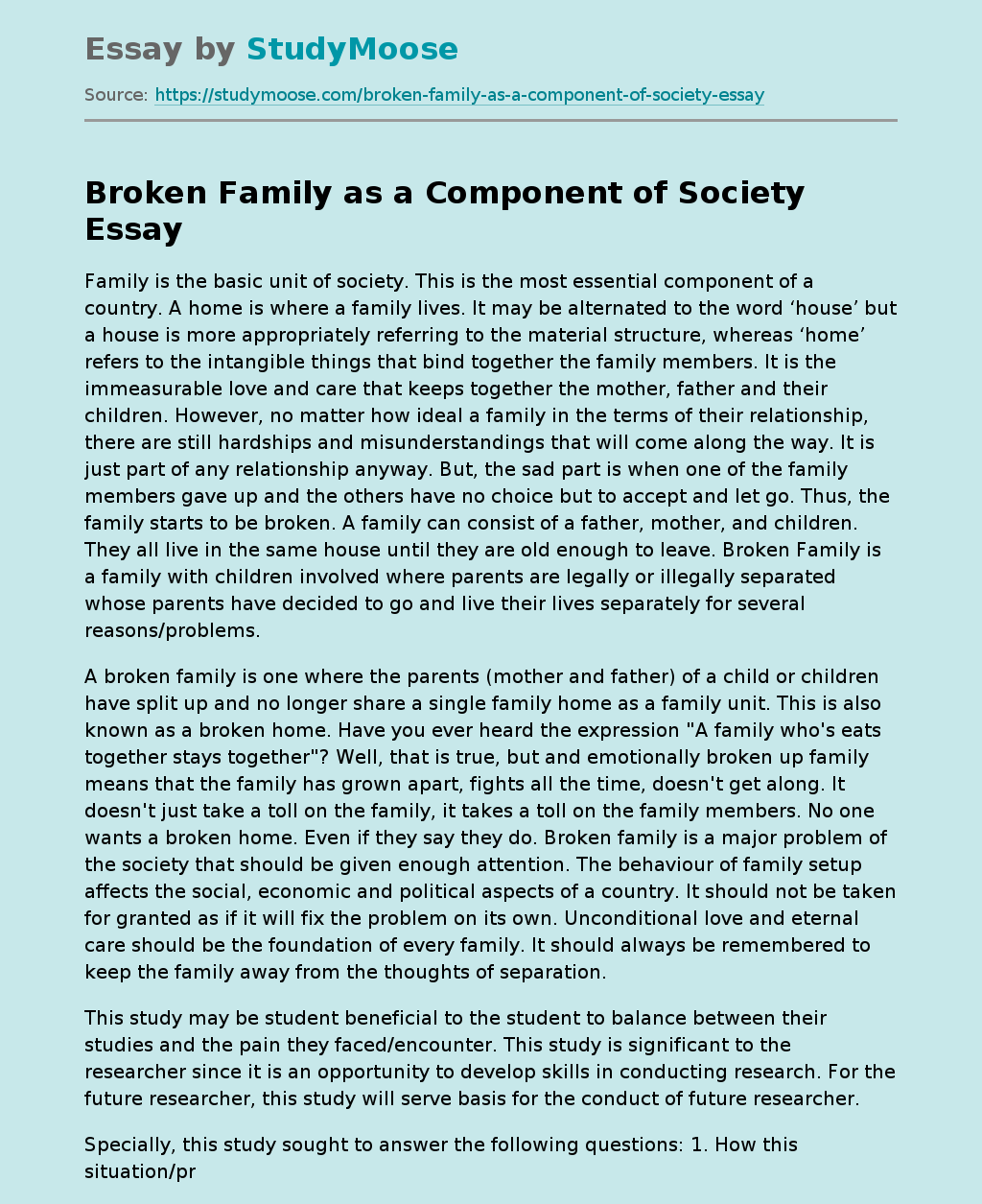