Pepsi Co. and Coca-Cola have been in business for a long time and both are largely successful companies in the beverage industry. They both have different brand components in comparison. A few of the different comparisons would be pricing, quality, packaging, logos, brand equity and features. In the following paper we will discuss these items in detail to see how different these two brands are. Pricing Strategies

Looking at the pricing strategies of PepsiCo and Coca-Cola they are taking two very different plans.

Don't use plagiarized sources.
Get Your Custom Essay on Brand Comparison Paper Just from $13,9/Page

The products they sell are similar with variations in taste and the brand war in the soda market has been to out discount your competitor to gain market share. The issue with giving deep discounts is that your digging into profits which could cause both long-term and short-term issues. Pepsi has realized the short-term strategy of deeply discounting products over its brand portfolio is not a sustainable business model for the long-term business needs. PepsiCo has changed its view from the short term to the long term and was in a transition in 2013 that slowly saw the company stop offering discounts but switch to a hybrid everyday value strategy.

The hybrid strategy closes the gap of holiday price points and its regular price point to provide a better value for the customer very day and not just wait for sales to purchase the product (“Reuters”, 2013).

Coke on the other had is still out performing PepsiCo and other competitors even in 2014 so their outlook is different. The large reason for their performance is the heavy discount strategy that is continuing to be implemented. While it is successful in the short-term it leaves the soda giant open for long-term financial issues (Cooper, 2014). Comparing the two while Coca-Cola is winning the short-term war currently PepsiCo is setting itself up for better long-term gains and growth. PepsiCo is able to see the value in the future of its company and understands it had to change the way it does business which would cause a short-term set back while introducing its new pricing strategy. However, the long-term value of doing this will keep the company in business and profitable for many years too come. Differences in product quality

As far as quality difference in the two products it really is a matter of taste, which is either acquired or just something a person likes. An example of an acquired taste one is like the household a person grows up in drinks Coca-Cola then their taste buds may come to like the product because that is what they were offered in the house. Which for either company doesn’t represent a quality issue in reality but because of brand loyalty they may deem Pepsi or Coke better than the other product. Pepsi has a distinct sweater taste than Coke, which has a hint of vanilla flavoring, higher carbonation, and sodium per swerving (Mertz, 2013). The lower carbonation and sodium makes Pepsi a slightly higher quality product in the not so healthy soda industry.

When it comes to Pepsi versus Coca-Cola, these companies have been competitors throughout the years. Both companies have come a long way with their advertising slogans. Coca-Cola’s first slogan in 1886 was “Drink Coke” and has changed many times over the years to today’s slogan “Open Happiness” (Coca Cola Journey, 2012). Pepsi’s first slogan in 1939, “Twice as much for a Nickel” promoted great pricing (G&M Distributors, Inc., 2012). Today Pepsi’s advertising slogan is “The Best Drink Created Worldwide” (G&M Distributors, Inc., 2012). These two companies could not be any more different is their logos, symbols and colors. Coca-Cola’s main logo has not changed much over the years, sticking with the cursive Coca-Cola font (Coca Cola Journey, 2012). Pepsi, on the other hand, has changed their logo many times over the years. From the Pepsi-Cola cursive font to the Pepsi bottle top, and more recently the Pepsi half red and half blue globe (G&M Distributors, Inc., 2012).

Even though these companies are vastly different in there branding they are very similar when it comes to image and personality. Both companies are concerned with sustainable packaging, recycling, and making an impact of the future of our globe and its environment. Coca-Cola has a commitment to “set the standard for sustainable packaging, achieve zero waste in our operations and recycle more packaging than we use” (Coca Cola Enterprises, 2014). Coca-Cola uses targets such as using less packaging, using recycled materials, PET bottles, recyclability of their packaging, manufacturing, and inspiring consumers to recycle to assist in keeping our environments clean (Coca Cola Enterprises, 2014). Coca-Cola also uses campaigns like “Recycle for the Future” to inspire communities to recycle (Coca Cola Enterprises, 2014). Pepsi also concerns them with less packaging, turning waste into wealth, recycling, and motivating others to recycle (PepsiCo, n.d.). Both companies want to improve what they are doing as a company to help improve the environments in communities where they are located.

Pepsi Co and Coca Cola are both known for offering similar colas that have competed to be consumer’s favorite soda for decades. Pepsi Co most recently has been seen as a more attractive brand to a younger audience than the well-known Coca Cola. Pepsi Co is known for many products beyond Pepsi cola but is easily recognized by the red, white, and blue logo. Besides the noticeable difference in logos Pepsi tends to have a sweeter taste and a citrusy flavor burst. (“Lubin”, 2012.) Almost everyone has a preference when it comes to choosing between Pepsi and Coca Cola. “There is a great comparison which says Pepsi is a timely brand and the other brands are timeless brand. So one is for the older people, one is for the younger people.” (“The Economic Times”, 2013.)

A brand has positive brand equity when consumers react more favorably to a product and the way it is marketed when the brand is identified than when it is not. (L.K. Keller, 2008.) Consumers have known both Pepsi Co and Coca Cola for decades. Consumers have tried their products and collected their memorabilia as a supporter of each brand. Although Coca Cola has proven to be the more successful brand Pepsi Co has not given up. Pepsi Co also has shown success with their sports beverage, Gatorade and bottled water, Aquafina. Pepsi Co has continued to make necessary changes in order to remain competitive and build brand equity.

In conclusion, although these two brands are largely successful in their own right they also have very different brand components. We were able to research and distinguish several of them to include pricing, quality, packaging, logos, brand equity and features. 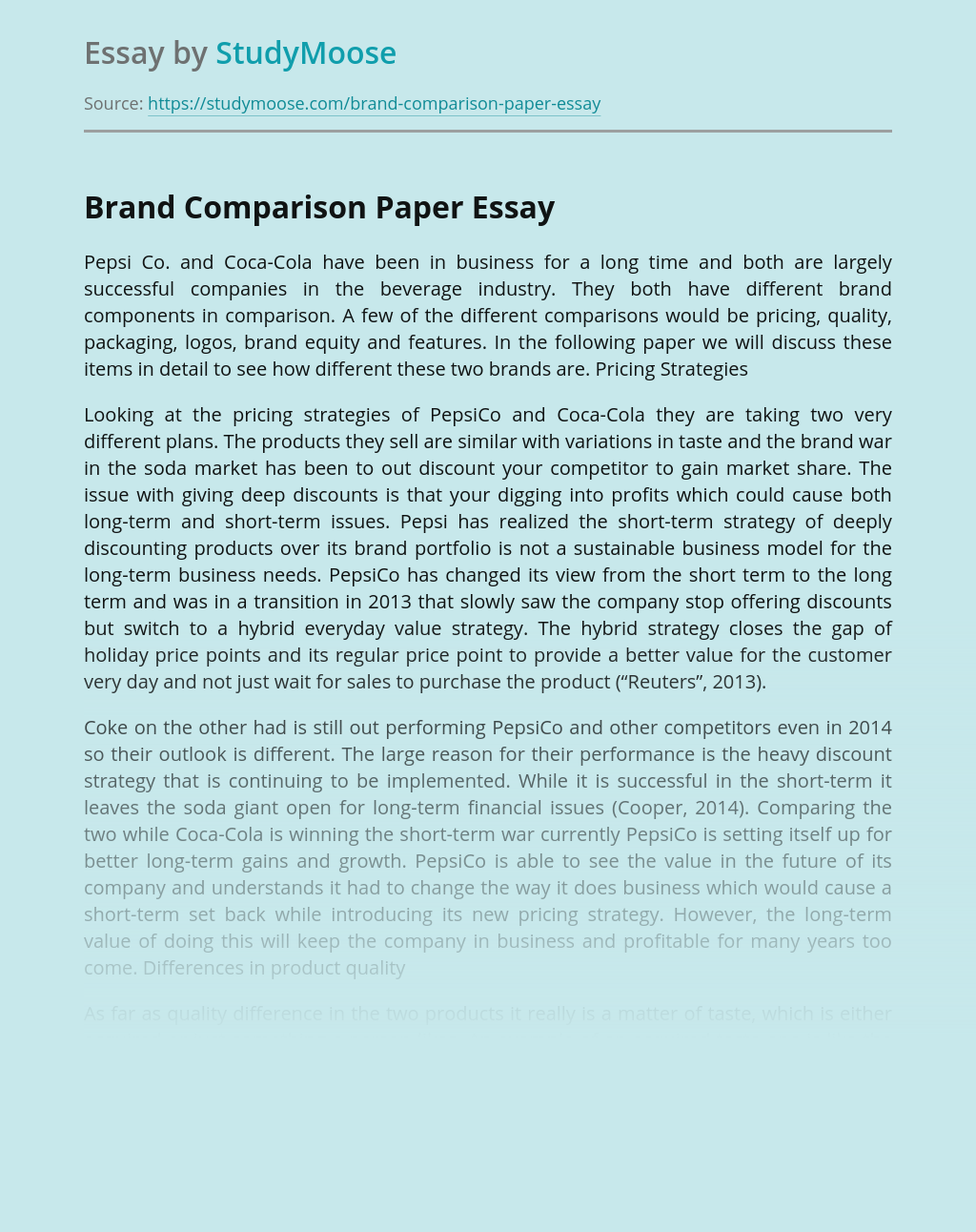 8 Steps of an Advertising Campaign

Here are eight steps you can follow to keep your advertising campaign on track and successful: Market research: Before you even start thinking about where you might want to place an ad or even what it could look like, it’s important to do at least some basic research. Even if you aren’t in a position...

Since the release of The Merchandise Marks Act by Great Britain in 1887 the term Made in Germany became one of the most well-known and trusted phrase in the world (Büchmann (1998)). At that time nobody could even divine that branding would become that important for businesses as it nowadays appears. Great Britain’s politicians somehow...

Get Essay
Stylistic Analysis of the Advertising Slogan

Intro In addition to the fast advancement of society and economy, advertisements have penetrated into every stratum of the society, ending up being the essential part of our life. Like newspapers, magazines, tv, radio, films, phone book, art performance, the Internet, and even the body, marketing utilizes numerous media to deliver info to the customer....

Ideally, the key segments selected would have high product penetration and would contain the highest proportions of hea^y users, indicating greater volume potential, a healthy position for the brand or brands under consideration, and favorable brand attitudes. This t’pe of ideal situation would make the selection of target segments quite easy. Unfortunately, this ideal situation...

Advertisement Is the Legalised Form of Telling Lies

100% yes. Most advertisements and advertisers make totally false claims which is far from reality. And they call it creativity. It is nothing but lying and society has grown to accept it.If the strict definition of “cheating” is taken, as is commonly defined in most countries across the world, then most advertisers and the companies...