In the article, “Hidden Intellectualism,” Gerald Graff discusses the topic of book smart versus street smart. Being street smart means having interest in other activities more than in school work, while being book smart is the complete opposite of that. Graff believes that having the personality of a street smart person can benefit society if one knows how to channel their potential correctly. He persuades his views to the readers by using his personal experiences and displaying the positives of being street smart.

Don't use plagiarized sources. Get your custom essay on
“ Book Smart vs Street Smart ”
Get custom paper
NEW! smart matching with writer

During his childhood years, Graff lived in a middle class neighborhood, while being a block away from what would be classified to some people as the “hood. ” He would encounter people from that part of the hood daily. He would have to hide his intelligence in the fear that he would get beat up or robbed. He loved sports more than school, so he thought he was in the street smart crowd. “It was in these discussions with friends about toughness and sports, I think, and in my reading of sports books and magazines, that I began to learn the rudiments of the intellectual life…” (Graff 10).

In this quote, Graff explains how being street smart was actually helpful for him. He was learning elements of argumentation without even meaning to do so. He later explains the different kinds of components he learned in his arguments, “…how to make an argument, weigh different kinds of evidence, move between particulars and generalizations, summarize the views of others, and enter a conversation about ideas” (Graff 10).

He did not think it would have been this easy to do all of these things without reading something to do with Shakespeare. When he realized that loving sports and being able to argue over this subject was actually helping him, he started doing some research on how schools should use relatable subjects to help the street smart students connect like the other students do. This way they would be able to learn in a way that is most understandable to them.

He explains that if a student would rather choose a sports magazine over a novel to write about, then it is only smart enough to assign them to write from the magazine. This way they are interested in what they are writing about, and also they are bettering their writing skills. “Give me the student anytime who writes a sharply argued, sociologically acute analysis of an issue in Source over the student who writes a lifeless explication of Hamlet or Socrates’ Apology” (Graff 18).

In this ending statement, Graff is confident about his views and is openly challenging anybody to contradict whatever he has previously stated. Graff’s personal experiences assist in conveying why he felt so strong about this topic. Also, he gives ideas to schools and universities on what teaching material they should use for the street smart students. Not only does he provide help, but he is also confident of its success. There is a way to use the street smart in a book smart type of way. 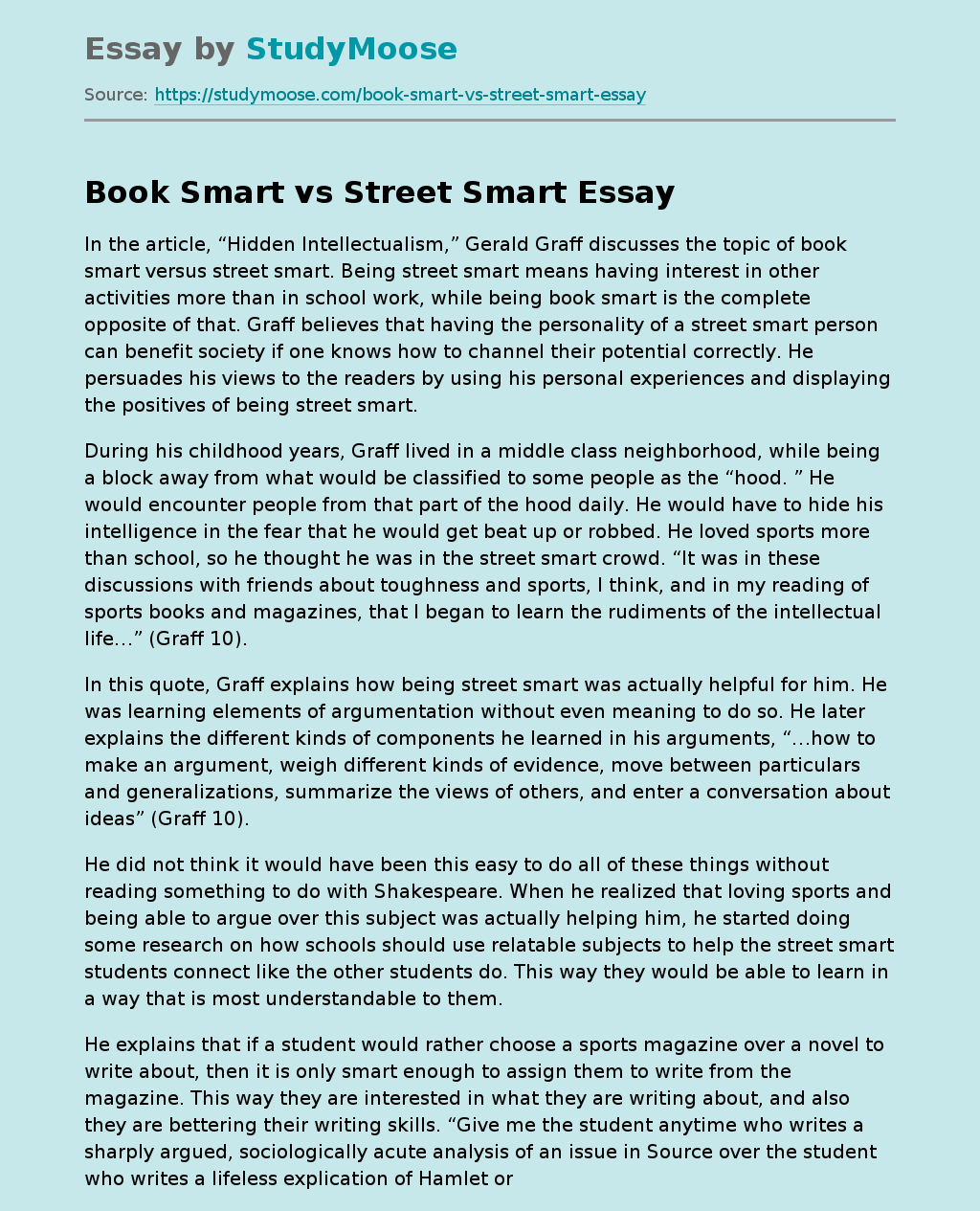