They have been discussing the loss of Belle Reve, loans, mortgages and Stanley wants all the papers that will confirm the matter. Stanley: … – a man has to take interest in his wife’s affairs – especially now that she’s going to have a baby. Narrator: Blanche opens her eyes. The ‘blue piano’ sounds louder. Blanche: Stella? Stella going to have a baby? [Dreamily. ] I didn’t know she was going to have a baby! As well as Blanche, herself, we did not know that Stella was expecting! The music would make us listen carefully to what was being said and create an atmosphere of agitation.

Don't use plagiarized sources. Get your custom essay on
“ Blanche faces Stella ”
Get custom paper
NEW! smart matching with writer

As you may have read above, Blanche had not been aware of what, exactly, Stanley was talking about (his wife being pregnant. ) Her eyes were obviously shut and she only opened them in sudden realisation. This was when the ‘blue piano’ sounded louder. For Blanche, what Stanley told her, was enough to wake her up. However, even if we had missed these dialogues as a group of spectators, ‘the blue piano sounds louder.

‘ Then Blanche gives a quick synopsis to us, in case we failed to seize the first one. Not only does the ‘blue piano’ make us feel restless and impatient but it has also been used as a reminder for its target audience.

At the end of scene seven, Blanche comes out of the bathroom and is curious over her sister’s strange behaviour. She is sure something has gone terribly wrong. Stella [turning quickly away]: Why, nothing has happened, Blanche.

Blanche: You’re lying! Something has! Narrator: She stares fearfully at Stella, who pretends to be busy at the table. The distant piano goes into a hectic breakdown. This is a dramatic moment for Blanche. According to this quote, Stella is lying and hiding her true emotions. Blanche is fearful, Stella is deceitful, and the piano breaks down.

It symbolises the shock, fright and the fact that the truth has finally been disclosed. On the stage, suspense would increase and the audience would wonder what happens next. Another example of the presence of the ‘blue piano’ is when Blanche and Stella have been expressing their views of Stanley. Blanche considers him to have ‘animal force’ while Stella finds such things unimportant. Stanley has overheard their exchange of views and casually enters, once they have finished talking. Narrator: Stella has embraced him with both arms, fiercely, and full in the view of Blanche… …

Over her head he grins through the curtains at Blanche… … the music of the ‘blue piano’ and trumpet and drums is heard. The instruments mentioned in this quote build-up jealousy, another theme in the play. In this case, ‘the music of the blue piano’ symbolises Stanley’s triumph over Blanche. He is grinning because he has won the battle between himself and Blanche. He is showing-off because he knows he has control over Stella, as she came running into his arms and is in his possession. Again, this is linked very much with superiority. Stanley always thinks that men are more important.

For instance, when he is excited to be a father, Stanley exclaims to Blanche that he will tear off his pyjama coat and ‘wave it like a flag! ‘ He also includes in his speech that the telephone will ring and ‘they’ (referring to the doctors) will say; “You’ve got a son! ” This is evidence that a baby girl is not even on his mind. He wants his ‘boy’ to grow up like him, follow his footsteps and be a real man. This idea was also a symbol in Streetcar to show the influence of men in society. At the end of scene ten, a serious incident occurs: Narrator: She moans… … He picks up her inert figure and carries her to the bed.

The hot trumpet and drums from the Four Deuces sound loudly. This statement is given to us just after Blanche ‘smashes a bottle on the table. ‘ She then clutches ‘the broken top. ‘ As I have mentioned several times before, sexual or racist discrimination was illegal in the nineteen-forties. After seeing the actions above, an intelligent audience would assume what happens next, especially when the loud music is heard. This is another reason why ‘the hot trumpet’ was used. Here it has been used to symbolise Blanche’s rape by Stanley. Streetcar includes a large number of symbols that have been added purposely for individual reasons.

The major symbols have already been discussed but there are other minor ones, which appear maybe only once or twice. The morning after the poker party, Blanche faces Stella and is determined to convince her sister to move out and leave Stanley. However, Stella is far too submissive to Stanley and thinks that Blanche is ‘making much too fuss’ over the matter. She starts cleaning up the mess in the room but her elder sister is against her actions. Blanche: Stop it. Let go of that broom. I won’t have you cleaning up for him! So far, I have been able to examine this text under two interpretations. 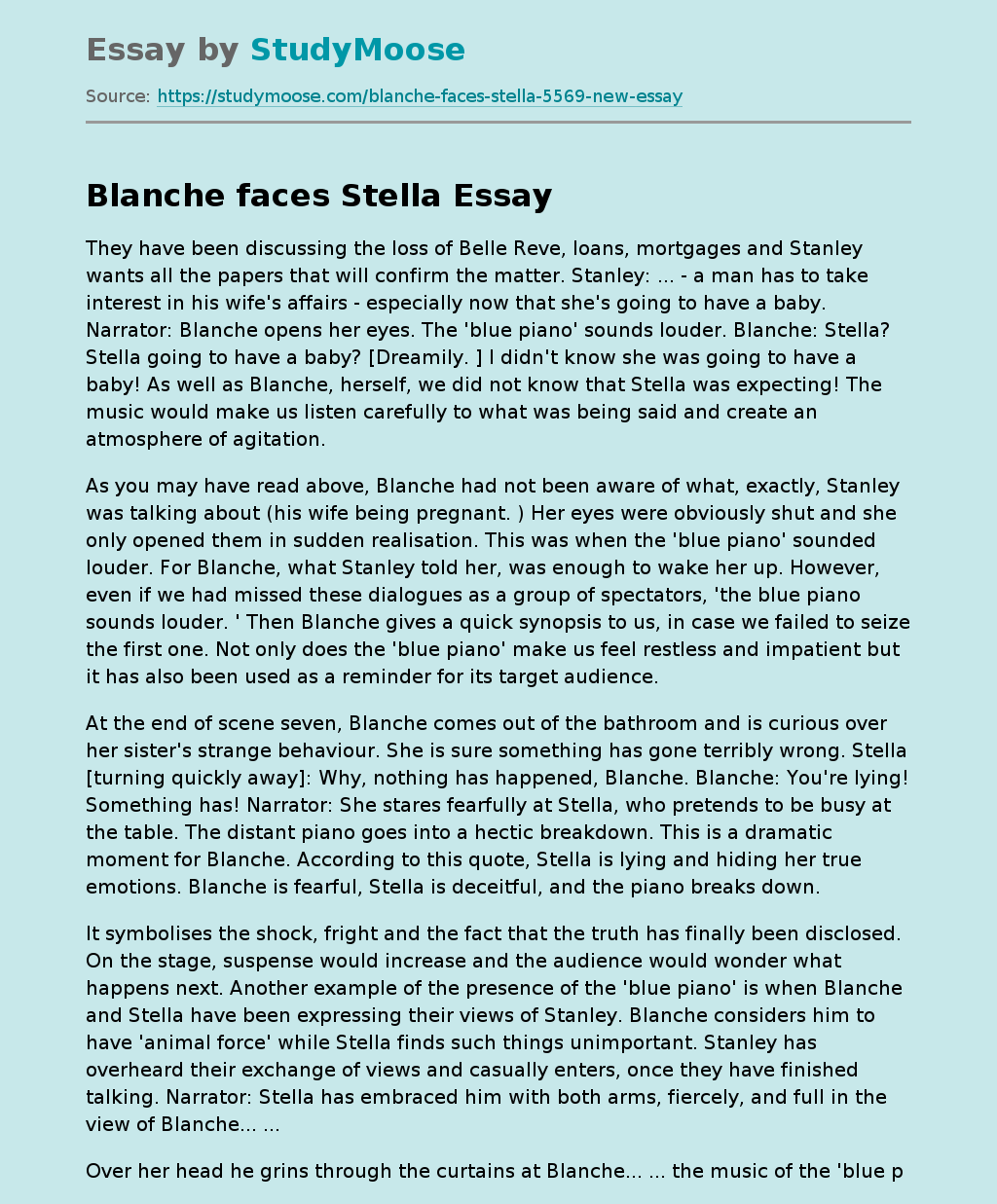