Blaming Women in " Sir Gawain and the Green Knight"

Sir Gawain and the Green Knight is an amazing, drama filled story that contains tons of action and keeps readers on the edge of their seats; yet, the story has one major issue. In the end of this story, starting in line 2414, Sir Gawain talks about the fact that he should have known better than to trust the woman. He continues to describe women as if they are all deceptive. Then he rants on, listing multiple Bible stories in which he believes that the woman was responsible for the man’s downfall.

Don't use plagiarized sources. Get your custom essay on
“ Blaming Women in ” Sir Gawain and the Green Knight” ”
Get custom paper
NEW! smart matching with writer

However, upon digging deeper into the Bible stories mentioned in Sir Gawain and the Green Knight, it can be realized that the men should be held responsible as well as the women; which also proves to be true in the case of Sir Gawain.

The first story he mentions, in line 2416, is the story of Adam and Eve. While reading Genesis, it becomes very apparent that God did not solely blame Eve for the downfall of man.

When God talks to them about their sin, they both blame someone else. Adam blames Eve and Eve blames the serpent. Despite the fact that Adam did not see himself at fault, God did. In Genesis chapter three, verses seventeen through nineteen the Lord addresses Adam’s role in the sin and says that because he failed, the land would be cursed and he would have to work much harder to provide for his family. Therefore, since God did not solely blame Eve, then it can be assumed that Sir Gawain is not justified in doing so.

This also seems to be the case in Sir Gawain and the Green Knight.

In the story of Sir Gawain and the Green Knight, he assigns blame to the woman. Yet, upon looking back in the story, it can be seen that this case is similar to the case of Adam and Eve. The woman in the story offers Sir Gawain her girdle, in line 1834, promising him that it will keep him safe. He, of course, afraid of what was coming, accepted the gift. Still, it is important to note that he did not have to do so. He took it out of his own free will. To add to that, he was well aware that he was supposed to give his winnings of the day to the master. In lines 1105 through 1109, we see that Sir Gawain made a pact with the master to give whatever he won in the house to him. They followed this pact for the days that followed and then we see on the final day, that he chooses to withhold the girdle. Line 1936 says that, “He clasps him tight and kisses him three times.” This was the opportunity for him to also give up the girdle, or even talk through with the master that he received it that day but needed it for his journey. Sir Gawain had every opportunity to make the right choice, yet instead, he made the choice to hide his true winnings from the day. This is where it can be seen that he is to be held accountable for his choice. Just like Eve, the lady did offer him the tempting prize, but Sir Gawain was still the one that made the choice to take the girdle instead of being honest.

Another story that he mentions, in line 2417, is Samson and Delilah. While it may be said that Delilah tricked him, when reading the story, it is seen that there was no reason for Samson to be tricked by her. To start off with, in Judges chapter fourteen it says that God had already given him a wife, so there was no reason for him to be with Delilah in the first place. Secondly, in chapter sixteen in the book of Judges, you read that Delilah attempted to trick Samson prior to her final success. The first three times that Delilah asks Samson about his strength, he lies to her, and she does whatever it was that he said would make him weak. For example, the first times he says that if he is tied with seven new bowstrings that have not been dried then he will become weak, then she does this, and when it does not work, she accuses him of making a fool out of her. She basically gives away the fact that she is trying to make him weak. He tells her a lie two more times and each time, she tries to make him weak. Yet, even after all that, Samson gives in and tells her the truth. It seems as though Samson should have caught on to the woman’s intentions long before he gave away the truth about his strength and its source. This also seems to be what takes place in the story of Sir Gawain and the Green Knight.

The lady in Sir Gawain’s story, tries to tempt him multiple times. The first day of his deal with the master of the house, in line 1193, she sneaks into his bed with him. The story builds up and each day she comes to him, trying to tempt him. However, each day, he turns her down and they only exchange friendly kisses. At this point, just like with Delilah, there is already a pattern of behavior that should serve as a warning sign. On the final day, she decides that he needs to have something of hers, since he will not give her something of his. She first offers him a ring. Yet, in line 1821, it says, “but he would not accept it.” Therefore, it can be concluded that he knew taking something of hers was a bad idea. He knew that she was offering him something that would not be a wise choice. Therefore, even though there were many obvious warning signs about her, when she offers him the girdle, he takes her up on it because he desires the safety that it may provide.

Therefore, when digging deeper into the Bible and the story of Sir Gawain and the Green Knight it becomes apparent that the men should be to blame for the choices they make, along with the woman. The books of Romans makes it very clear who will be responsible, it says, in chapter fourteen, verse twelve, “So then every one of us shall give account of himself to God.” Therefore, it can be assumed that God will hold each person responsible for what they do. Consequently, the rant that Sir Gawain goes on in the end of the story becomes a little less sturdy because he made many choices along the way that got him where he was. Therefore, he is to blame for his own circumstances.

Blaming Women in " Sir Gawain and the Green Knight". (2021, Sep 13). Retrieved from https://studymoose.com/blaming-women-in-sir-gawain-and-the-green-knight-essay 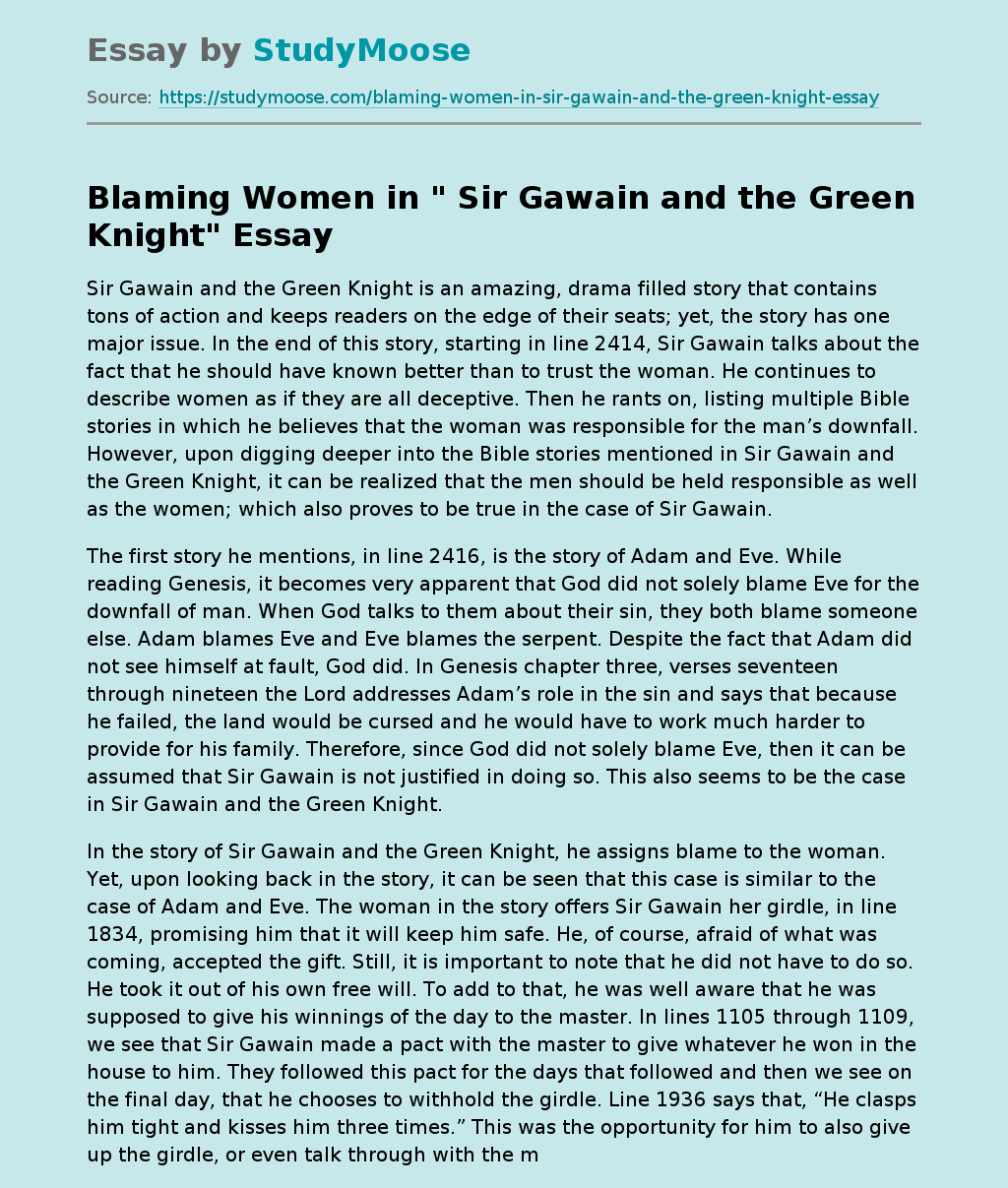