For the book report, I read the book Black Like Me by John Howard Griffin. The story takes place in 1959 and revolves around a white man who decides to go to the Deep South undercover as a black man to try to understand what really goes on there. This man, John Griffin, documented his journey from beginning to end in order to make an effort to end racial segregation. For seven weeks, he lived and experienced the horrors that a black man lived every day during that time.

Don't use plagiarized sources. Get your custom essay on
“ Black Like Me – Book Report ”
Get custom paper
NEW! smart matching with writer

He quickly learned that he no longer had the same privileges as he did as a white man.

He could no longer go into any store he wanted and had to walk miles before finding someone who would let him buy a glass of water or to use the bathroom. Reading this book, my eyes were opened to all the disadvantages the black man faced that I always heard about in school, but never really understood.

John Griffin moved away from his home and family in Mansfield, Texas to New Orleans, Louisiana to conduct his research. His motivation was for racial justice and for his frustration of not understanding the black experience. At this time, no black man in his right mind would tell a white man how horrible life was for him.

Since Griffin was a white man, interviewing blacks would not give him a true picture of their life. He decides to go with the only way he will truly find out what it’s like to be a black in the South; to change the color of his skin.

He went through different medical treatments to accomplish this. To change his skin color from white to black, he took pills to darken his skin, and also used skin dyes. He then could easily pass through New Orleans’ streets as a ‘Negro’. He befriended a shoeshine who had been shining his exact same shoes when he was a white man.

The shoeshine is delighted with Griffin’s project and opens the life of a black man up to him. The shoeshine taught him how to act, talk, and everything else that he needed to know. Going into this study, Griffin, knew he would run into prejudice, oppression, and many hardships, but he did not truly know how bad it was until now. He was no longer allowed to use any bathroom he pleased. Sometimes he would have to walk all the way across town, even when there was a bathroom right by him, because he could not use a white man’s facilities.

Throughout his experience as a black man he deals with insults and struggles on a daily basis. After being in New Orleans for a while, he decides to go to the heart of Mississippi where racial prejudice is even worse for blacks. Griffin notices that the black communities there seemed to have given up hope of ever being equal, and he begins to notice the same look across his own face. The whites were the main contributors to this loss of hope. For example, when he was riding the bus into Mississippi they took a ten minute bathroom break.

The bus driver refused to let the black passengers off because he did not want to have to go “round them up” when they left. After witnessing this sense of defeat in Mississippi and how terrible the whites were, he decides to venture to Montgomery, Alabama where he is shocked at what he finds. In Montgomery, the black community is recharged with determination. They practice passive resistance against the racist laws and rules set against them.

They are filled with hope and the words of Dr. Martin Luther King Jr. They are not afraid to go to jail or face the other consequences that may lie ahead. After seeing this, he begins to switch back and forth between being a black man and then a white man the very next day. He visits the very same places as a white man and is treated with the greatest respect, while as a black man he was treated with fear and suspicion. He was able to go into the restaurants where blacks were not even allowed to stop to look at the menu. Switching between black and white opened his eyes to how society treated blacks and whites at the time.

One day he was a disgrace and the next he was treated like a king. After this long trip, he decided to let his skin fully return white and go back home. After looking over his information and organizing it he decides it is finally time for the public to know the truth. He then publishes his findings and goes on television for interviews. He is asked to speak on many shows. Many people support him and his findings, but the people in his home town do not offer much support. People in his town begin to turn on him and threaten his life and the lives of his family members.

He asks the police to watch his house so his family is not harmed. It gets so bad that they have to leave for a while. When they come back, nothing has changed. Someone in town hangs a dummy of him on Main Street. The dummy is half black and half white and there was a sign on it that read “John Griffin”. He decided to move his family away once and for all to prevent anyone from getting hurt. This story gave me an inside look of what it was like to be both a black and a white person during 1959 in the south. I was unable to put the book down because I was so intrigued.

I have never heard the black person’s view to racial prejudice before. This story took my breath away. My favorite part of this book is when John Griffin (1960) describes how you are treated based on your skin color. I was the same man, whether white or black. Yet when I was white, I received the brotherly-love smiles and the privileges from whites and the hate stares or obsequiousness from the Negroes. And when I was a Negro, the whites judged me fit for the junk heap, while the Negroes treated me with great warmth. (p. 126) I am shocked from what I read in this book.

The author was treated completely different as a white man than he was as a black man. When he was a white man, he receives respect and courtesy from the other whites, but suspicion and fear from the blacks. When he was a black man, he receives hatred and hostility from the whites, but warmth and generosity from his fellow blacks. It surprised me that you could sense these distinct feelings toward him while reading. It was almost like I was living it myself. It is crazy how cold-hearted some of the white people acted towards him.

Some had sympathy in their eyes, but others were set to make his life horrible. This book just goes to show you how truly bad it was for the blacks during segregation. It is proof of it, and the stories of John Griffin are more realistic than any told or documented before. Black Like Me was not made up to sympathize the blacks or as an overreaction. It’s the truth that Griffin personally witnessed and lived. The whites dehumanized the blacks and treated them like savages. Towards the end of the book he was walking down a highway for miles hoping someone would pick him up.

During the day, not a single white person would pick him up. This all changed during the night. That night, he always had a ride. He realized after a while, that the whites only picked him up to hear about the black man’s sex life. This disgusts me. These men were asking him repulsive questions, and if he did not give him a sufficient answer, he would be kicked out of the vehicle. The questions that they were asking him would never be asked to his friends. This part of the book illustrates how the whites did not care for the black man’s pride and instead wanted to dehumanize him.

Reading this book, Black Like Me, opened my eyes to the terrors that the black people faced in the South during 1959. I also gain an understanding of how whites were treated in comparison to blacks. John Griffin was very brave for taking on this project and publishing his findings. This must have taken a lot of courage, but his work helped many people. Without this inside look at the treatment of blacks in the South, we might never have known how truly horrible it was. Yes, there are other stories, but this is a full account of one man’s journey in and out of the heart of segregation.

Black Like Me - Book Report. (2016, Sep 08). Retrieved from https://studymoose.com/black-like-me-book-report-essay 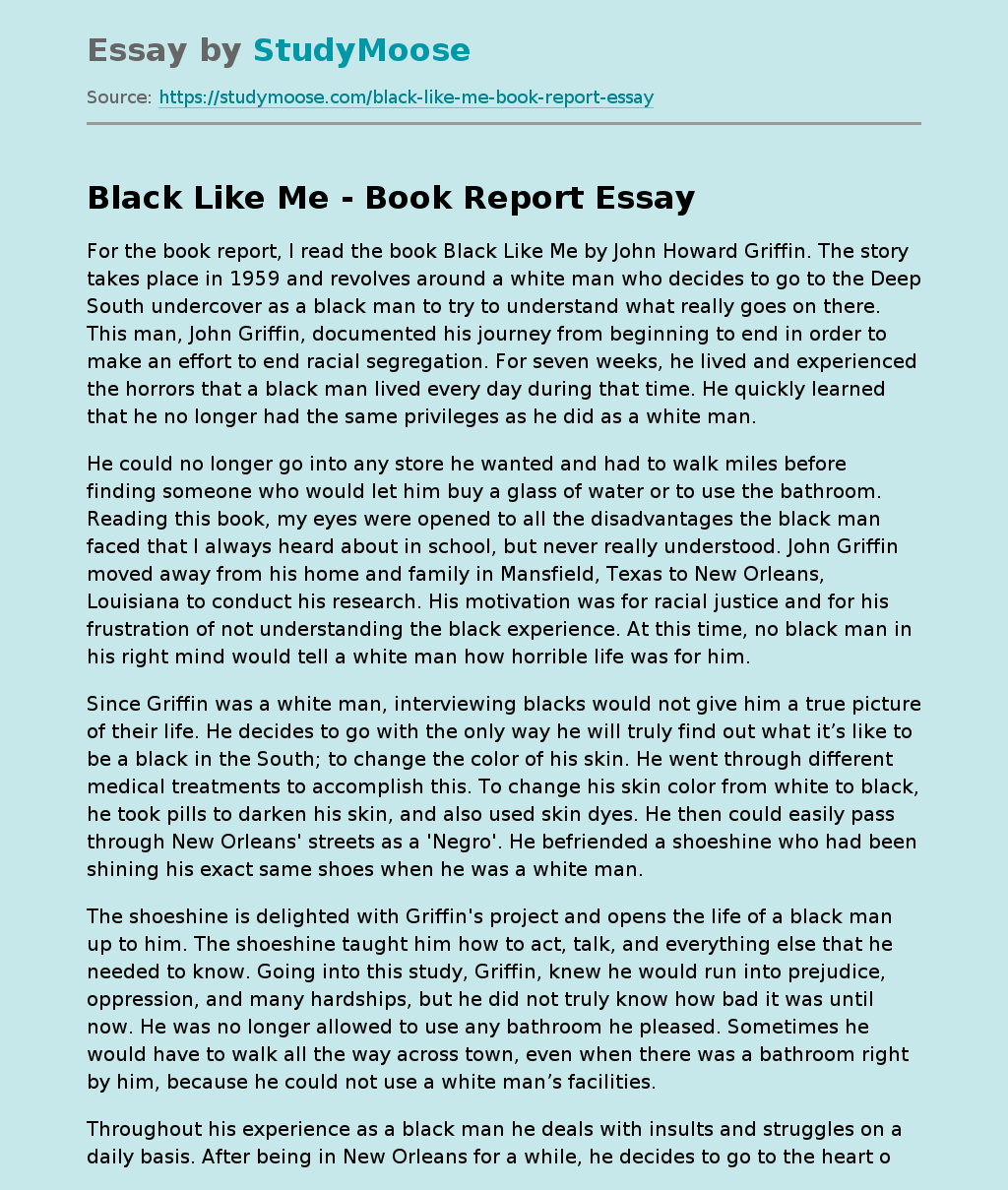