Psychologists past, present, and future desire the answer to one basic question; “what factors influence a person’s physical and mental health are they related if a relationship exists”; thus Health Psychology emerged. In pursuit of the answer several models or perspectives came about. Over time psychologist realized that focusing on one causal factor results in partial information for analysis of health and illness. Thus, the biopsychosocial model became the primary perspective used and is the focus of this paper. “This perspective recognizes that biological, psychological, and sociocultural forces act together to determine an individual’s health and vulnerability to disease; that is, health and disease must be explained in terms of multiple contexts” (Straub, 2012, p.

Don't use plagiarized sources. Get your custom essay on
“ Biopsychosocial Perspective ”
Get custom paper
NEW! smart matching with writer

Through a hypothetical scenario an illustration of the ways in which all three factors interacts and influences an individual’s health and well-being will emerge to reaffirm understanding.

The endocrine system is the glands within the body and the hormones produced by the glands. The nervous system controls the glands through stimulation. The hormones released from the glands interact throughout the body to maintain homeostasis. The nervous system comprises the brain, the sensory organs, the spinal cord, and all the nerves connecting these organs with the rest of the body. The primary job of the nervous system is controlling the body and communication within its parts. The cardiovascular system is the blood, blood vessels, and the heart. The primary job of the cardiovascular system is to carry oxygen, nutrient, cellular waste products, and hormones within the body. All these systems work together to keep the body functioning and healthy.

The biomedical model considers the absence of disease is physical wellness. This model is good practice but it has limitations. The biomedical model focuses on health and well-being as biological issues with biomedical solutions (Sutton, Baum, & Johnston, 2005). On the other hand, the biopsychosocial model takes into account the whole person leading to extensive research in many aspects of wellness. It addresses more than physical well-being as many people now are ill but they have no presence of disease. Socioeconomic status, race, ethnicity and generational differences all play important roles in this model of wellness (Marks, Murray, Evans, & Estacio, 2011). The biopsychosocial model is an expansion of the biomedical model. This new model agrees that biological issues influences health and well-being, but also believes that psychological and social issues influence health and well-being as well.

A 30 year old mother of four children under 10 goes to her physician complaining of extreme fatigue and a loss of energy. Many people would say “of course you are tired. You have four young children”. She has high blood pressure, but her medication controls it so that is ruled out as the cause of her fatigue. Her doctor runs blood work, sends her for a sleep study, and asks questions about social and psychological issues that could be bothering her. When all the results are in there is no answer for her fatigue so the doctor diagnosis her with Chronic Fatigue Syndrome which means that no one knows why you are tired. Over the next several years she is in and out of her doctor’s office. The fatigue has such a toll on the woman that she gets sick easily and more often. Until she turned 30 this woman only had seasonal allergies and never got the flu or a cold. Now she seems to be sick more than not. Using the biopsychosocial model to examine this woman’s health and well-being will show how the biological, psychological, and social contexts as well as the systems are interacting to influence her health.

When the doctor was questioning the woman about her psychological and social well-being he was ruling out depression as the cause. The woman is not fatigued because she is a busy mom rather the cause is a deficiency of a chemical in the brain. Through the numerous visits to her doctor she learns of a vitamin D deficiency, an underactive thyroid, and finally the root cause of her fatigue; Narcolepsy. Narcolepsy is a sleep disorder which affects an individual’s waking hours as a result of insufficient sleep. This disorder leaves the woman needing to take medication to sleep and medication to stay awake, but still feeling fatigued about half the time. The systems involved in this individual’s health issues are the nervous, endocrine, and cardiovascular. Looking back at the clock analogy, three of the gears of her clock have nicks. Since three of her systems are weak this woman is vulnerable to disease and illness. The biological context of her health is the deficiency of the chemical within the brain. The psychological context of her health is how she copes and over comes the issues surrounding her disorder. The social context of her health is how her family, friends, and community react to her disorder.

On a daily basis she struggles to function adequately. She is now 37 years old and works as a substitute teacher, working on her masters, wife, and mother. Every day she wakes up feeling as though she could go back to sleep and did for the first two years. She could sleep eight to nine hours at night get her kids off to school then sleep all day till her kids get home. With the medication she takes now the day time sleepiness is not as severe, but can still be overwhelming some days. Imagine the social issues that can arise as a substitute teacher if her medication is not working and she falls asleep while with students. Trying to function with narcolepsy when life previous to the disorder consists of outdoor activities, energy, and multi-tasking can cause psychological issues. Having a strong social support system, following medical advice, and a strong will to succeed keep the woman psychologically strong. The woman does struggle in her academic life, but refuses to give up. So tired and rundown daily she fights thru any issues that arise from the disorder that now runs her biological, psychological, and social life. Although, her clock may lose time as a result of the nicked gears, she duck-tapes the nicks and reset her clock daily. Narcolepsy is a life altering, mysterious neurological disorder that can pose serious problems for the ones affected by it.  Although, there is no cure for narcolepsy research shows that with medication, education on the disorder, counseling, support from family members and friends, that there can be some relief from the symptoms.

Over time psychologist realized that focusing on one causal factor results in partial information for analysis of health and illness. Thus, the biopsychosocial model became the primary perspective used and was the focus of this paper. An understanding of the biopsychosocial perspective attained through a description of the systems and three contexts of this theory, examination of the influence of this theory on the biomedical viewpoint, and examination of how the interaction of biological, psychological, and social factors influence a person’s health. The hypothetical scenario looked at a woman with narcolepsy and the issues she faces daily from a biopsychosocial perspective. 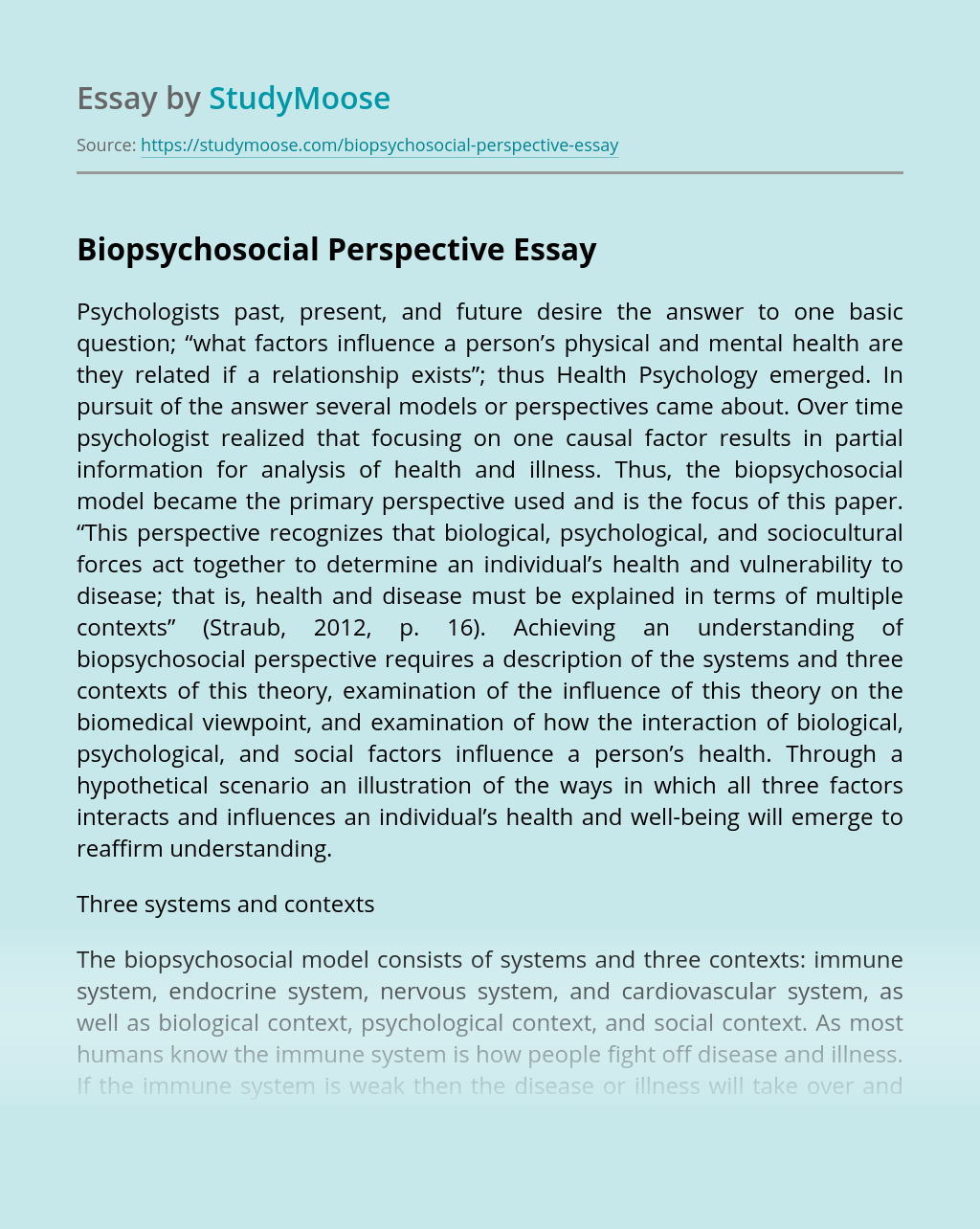