• Biocon is an Indian Drug company that has evolved over the years:

▪ In order to get into a bigger & faster growing market, it started manufacturing small molecule generic drugs like Statins and gained 15-20% share of the market

▪ Later it entered into large molecules market like Insulin because of a huge global market and a growing diabetic population in India. Its expertise in fermentation process helped it in the production of insulin.

• Now it has formed an alliance with CIMAB to develop a new drug called BIOMAb for treating head and neck cancer.

▪ As part of its medium to long term strategy, Biocon wanted to develop products in collaboration with other partners.

▪ BIOMAb would give it expertise in Mammalian cell technology, which was the future of Biotechnology.

▪ It would also be a chance to develop a new market and build new research and marketing capabilities which are essential long-term success of the company.

• Head and Neck cancer is one of the most prevalent forms of cancer in India, accounting for 28% of cancer incidences and 26% of total deaths.

• Currently Biocon is planning to launch the product in India.

• The increasing population and growing economy would increase the market size for BIOMAb.

• In future, Biocon may look at launching the drug in other countries in Asia and Africa.

Biocon is targeting the Indian market as of now and plans to expand the same in other geographies. India has a very high incidence for head and neck cancers as compared to other countries. However, the cancer treatment drugs being very expensive, only 1 percent of the affected patients can afford it. This number is expected to go up with the growing economy (9%) and population (1.4%).

The decision making unit in this case are the oncologists. Since they are specialists in this field, the patients do not give a second thought to their decisions. Since, Biocon is entering a completely new market and hence, it did not have a good base for entering into the oncology market. Therefore, they needed to target the doctors first.

• Doctors: They can provide better alternative for cancer treatment. BIOMAb’s trial was based on a six-dose treatment. Hence, doctors could provide a clearer picture of the cost of the total treatment.

• Patients: As per the second phase results, the drug proved proved to be a relatively successful drug in killing the tumor. Therefore, it was a viable drug for cancer patients. Also, being an local drug, it was expected to be cheaper than its foreign counterparts.

Biocon needs to conduct the phase-3 tests because of the below reasons:

• The doctors were already skeptic when the second phase tests were being conducted. Hence, they needed to reduce the skepticism among the oncologists.

Biocon can launch BIOMAb in the following steps:

▪ During this time, the third phase testing for BIOMAb can be done.

▪ BIOMAb can be launched in mid 2007 by which time the results of the third phase testing would have come.

• Biocon’s objective is to provide an affordable and competitive product.

• At the same time it needs to make sure that it doesn’t fall into the low quality image.

• It can price the drug at $2000 per dose so that it is considerably cheaper than the competitor and it can break-even in 5 years.

• The company should directly deliver the drugs to the Doctors which will help to cut down the channel margins and has significant economic benefit to the customer.

• As it needs to be refrigerated all the time and should be handled carefully, local pharmacists will be adding very little value.

• Since the number of cancer specialists in India is less, it is easier to reach them directly instead of the traditional option.

• As the decision makers are doctors, most of the effort of the marketing team must be directed at them.

• As cancer is a life threatening disease, it causes anxiety among the patients and their families. Thus Biocon should provide them needed support and counselling.

• The sales representatives must undergo product related training which enable them to educate and convince doctors, patients and their families regarding the disease and BIOMAb. 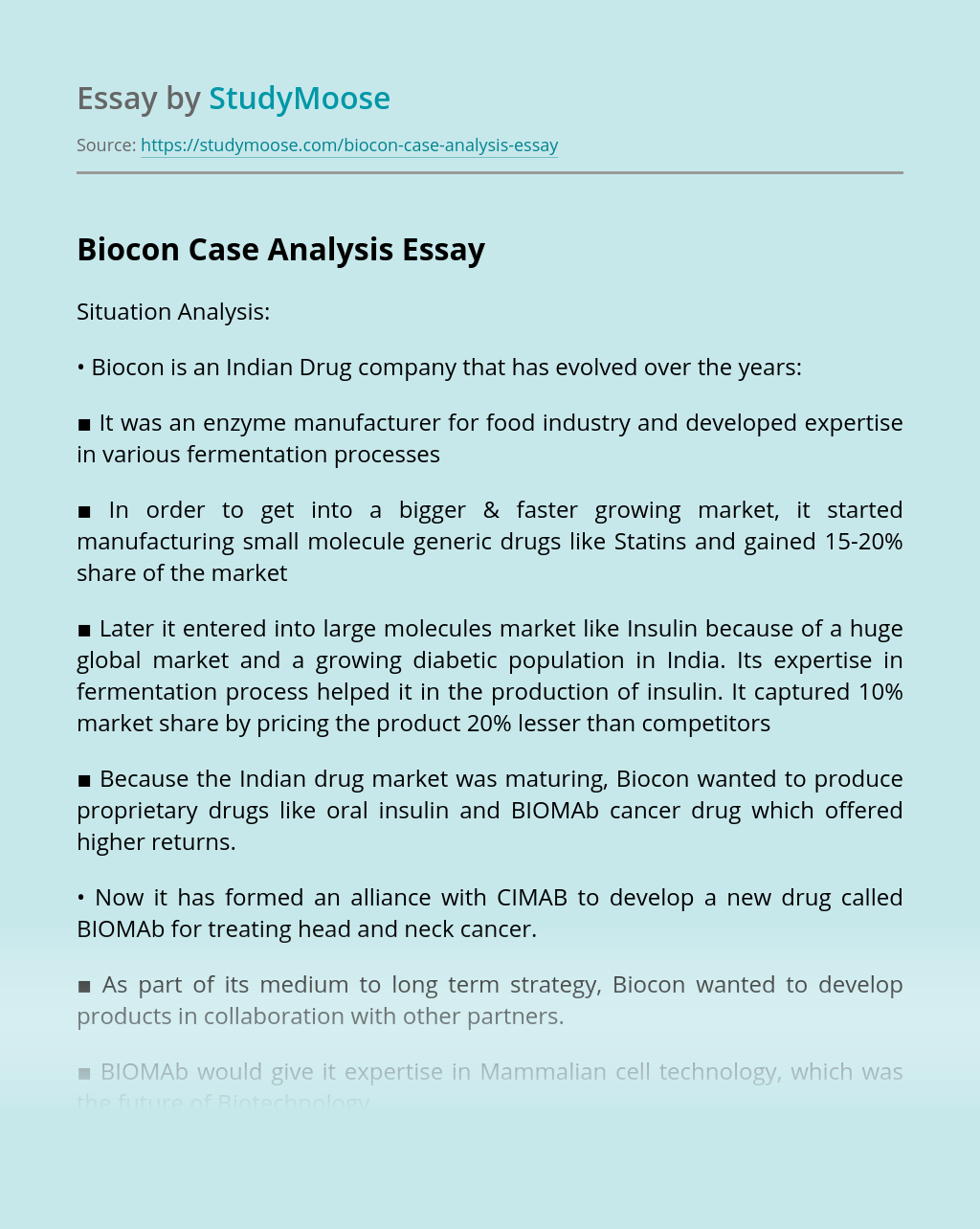