Jackie Elliot is seen as a traditional man with anti feminist views. he sees that boys should be tough whilst girls should be more placid. Throughout the film Billy Elliot, the directer has created the character Jackie Elliot, a widowed father feeling the grief of the recent lose of his wife. This essay suggests that the grief could be a factor of how Jackie goes about supporting his son.

The time that this film is set, is in the mid 80s.

It could be that people who do not keep to the social norm are discriminated against, which is a different circumstance in todays society, where people are very unique and most people value eachother’s individuality. In the town of Durham, the community has the same expectations as Jackie with gender based traditions and this may have influenced him to think this way.

When Billy is taken to the boxing gym by his father, he finds out that he doesn’t really like the idea of being a boxer once he steps into the ring for the first time.

Billy knows his father must really want Billy to get good at this tough sport, because in this family, that is stricken with poverty; his father still manages to pay for billy’s lessons and does want him to achieve. “they were my dad’s gloves, you’d better take better care of them” Jackie and his father were obviously unable to achieve from boxing, he’s putting his last hope in Billy.

Billy is aware of how his family and the community feel about boys doing ballet and has alot of courage to put their thoughts aside and just do the thing he loves. Upon finding out about Billy’s dancing. Jackie becomes enraged and expresses views of homophobic, Billy is determined to keep on dancing.

It is not until Jackie actually sees Billy dance for the first time, that he realises that dancing might well and trully be his son’s future. He sees that Billy does have talent and lowers himself into going back to work just so he can afford to take Billy to London for his audition himself.

“It is what mum would have wanted”, throughout the film, you watch as Jackie grieves for his dead wife, in that he hates Billy playing his mother’s piano. Billy must have inherited his interest in music and dance from his mother which is probably why Jackie must have hated it at first; Billy was like his mother and it reminded Jackie of her too much. He gives into his pain by selling jewelry for his son.

Jackie is most proud of his son, when at the end of the film. Billy dances out onto a big stage to perform “swanlake”. It takes Jackie’s breathe away.

Overall through this film, we see Jackie, a father who does love his son. Aside from hgis traditional and antifeminist beliefs, Jackie was able to come through with great support for his son. All he wants for his son is to see him doing something he loves, even if that is dancing

good, try to use lots of quotes and and examples from the film and refer back to the question throughout your essay. 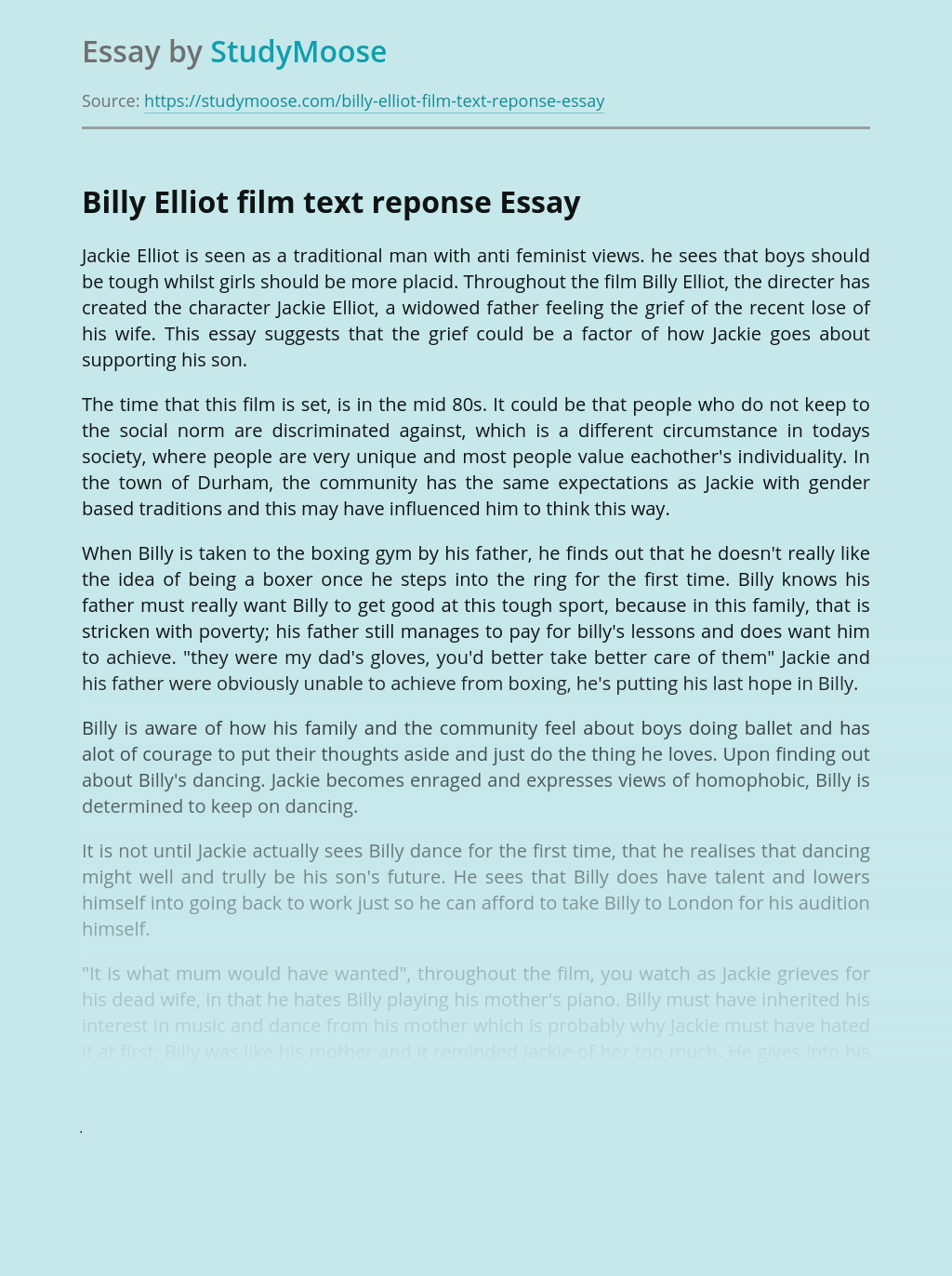