Bernie Madoff was a legend on Wall Street. His success grew very quickly and he built a trading powerhouse named Bernard L. Madoff Investment Securities that was founded in 1960. He enjoyed telling employees, peers, and friends that his enterprise started on the Pacific Ocean beaches in Long Beach, CA as a lifeguard. Madoff enjoyed leading his company, chairing the NASDAQ board, and presenting to traders as a leader in the industry sharing his tips, tricks, and lessons learned. By 2000, his company had become very popular and was commonly used by hedge funds, wealthy investors, and institutions.

Bernard L. Madoff Investment Securities had been successful for over 20 years that was worth nearly $65 billion at the time when the success had been identified as fraud. Madoff and team had set up a flourishing Ponzi scheme. A Ponzi scheme “is a fraudulent investment operation that pays returns to separate investors from their own money or money paid by subsequent investors, rather than any actual profit earned.

” This type of investment strategy is doomed from the start because there is never a plan to completely recoup the investor’s money; however, to the investor it seems like a good investment because it promised a higher short-term return.

Madoff’s Ponzi scheme had been a well crafted game and each move including precise calculations. As the authorities began to investigate the scandal they found that individuals, institutional investors, and securities authorities had been involved. Madoff and team created a group of financial managers to work with potential investors to sell the fraud.

This group was an uneducated and inexperienced staff that was tasked to “generate false and fraudulent documents” that were used to disguise these unethical business transactions.

These documents including trade blotters and monthly account statements were created using historical stock data from the Internet. In order to appear to have a thriving business, Madoff’s team began to wire funds from the New York and London offices to uphold the impression of Wall Street financial success. In reality there was very little stock bought and sold. Instead, the market was studied and the company pretended to purchase stock whose trajectories were in line with the firm’s goals.

Bernard L. Madoff Investment Securities had been reviewed by the U. S. Securities and Exchange Commission (SEC) and recorded two reports of suspicious behavior and financial reporting starting in 1999. However, the company had never been fully investigated until after the discovery of the Ponzi scheme. Madoff himself stated that it was a miracle that this plan wasn’t discovered because it was obvious when reviewing Wall Street’s central clearinghouse account which would have brought red flags. While leading this scheme, Madoff kept this unethical activity close; he only incorporated his family members and a few key accomplices including Frank DiPascali.

The success of this investor and legendary financial mentor has been named the largest financial investor fraud in history and the most successful Ponzi scheme to date. On July 14, Madoff began serving his sentence in Burtner Federal Correctional Complex. In addition to the 150 year sentence awarded to Madoff by the courts, they also called for $170 billion in assets from Madoff. This number was calculated and represented the amount of money that moved through the unlawful bank accounts during the years of fraudulent behavior.

As Judge Denny Chin sentenced Bernie Madoff, he called these crimes “extraordinarily evil”. However, the question is not “Was Madoff extraordinarily evil? ” because the answer to that question is simply yes. The real ethical question is “Who enabled Madoff to successfully complete these evil and unethical acts? ” That person was Madoff’s right hand man, Frank DiPascali. In 1975, college dropout and 19 year old Frank DiPascali joined Bernard L. Madoff Investment Securities, LLC (BMIS) following recruitment by his neighbor from Queens and Madoff’s longtime personal secretary Annette Bongiorno.

Despite his lack of a college education or any formal financial training, over his 33 years with Madoff’s New York firm DiPascali became a key lieutenant to Madoff, rising from a research analyst to serve in roles such as Director of Options Trading and Chief Financial Officer. While it is unclear to investigators whether Madoff ever ran a legitimate investment business, Madoff claimed in court that the Ponzi scheme only began in 1991 and thereafter did not involve legitimate investment activities.

In court testimony, DiPascali recounted that by the early 990’s, he knew the investment operation was fraudulent saying, “No purchases or sales of securities were actually taking place. It was all fake; it was fictitious. It was wrong, and I knew it was wrong at the time. ” As the primary deputy to Madoff, Frank DiPascali had a unique position of managing the massive fraud concocted by his boss. Through the two decades that the Ponzi scheme ran, DiPascali only cemented himself further in dishonesty rather than extracting himself from, or informing authorities of, the fraud.

DiPascali told Judge Richard Sullivan that while receiving orders and executing the fraud, he “knew it was criminal, and I did it anyway. ” In 2006 when the firm’s computer programmers Jerome O’Hara and George Perez refused to continue running the software that produced the fictitious trades and statements, DiPascali joined Madoff in learning how to run the software to continue the fraud and paying the programmers off for their silence. Besides Madoff, DiPascali was the only other person to run the infamous 17th floor operation at BMIS, where fraudulent transactions and account statements were produced for investors.

DiPascali has credited his loyalty to Madoff as the primary reason he continued to participate in the fraud. “I was loyal to him,” DiPascali said. “I ended up being loyal to a terrible, terrible fault. ” As DiPascali phrased it during a court hearing, “by 1990 or so, Bernie Madoff was a mentor to me and a lot more. ” Frank DiPascali’s attorney, Marc Mukasey, asserted that DiPascali operated with the belief that before the Ponzi scheme could collapse; Madoff would be able to repay investors and erase any fraud.

DiPascali reportedly had such confidence in Madoff’s great personal wealth that he believed no matter what, investors could be protected. However, DiPascali enjoyed generous compensation while directing the fraudulent investing operation. DiPascali’s salary from BMIS topped $2 million per year and from 2002 through 2008 DiPascali had a fictitious investor account at BMIS named after his yacht, Dorothy Jo, from which he personally withdrew over $5 million. DiPascali also used his BMIS corporate platinum American Express card to fund vacations, entertainment, and other personal expenses.

While Frank DiPascali did not conceive of the Ponzi scheme himself, he was second to none in actually managing the details of the fraud. The criminal complaint to which DiPascali plead guilty in August 2009 states, “DiPascali designed, developed and oversaw a wide and varying array of fictitious books and records – all prepared to conceal the scheme from investors, auditors and regulators. ” In addition to managing the backroom activities and generating false account records, DiPascali regularly spoke with clients and lied about their investment accounts. 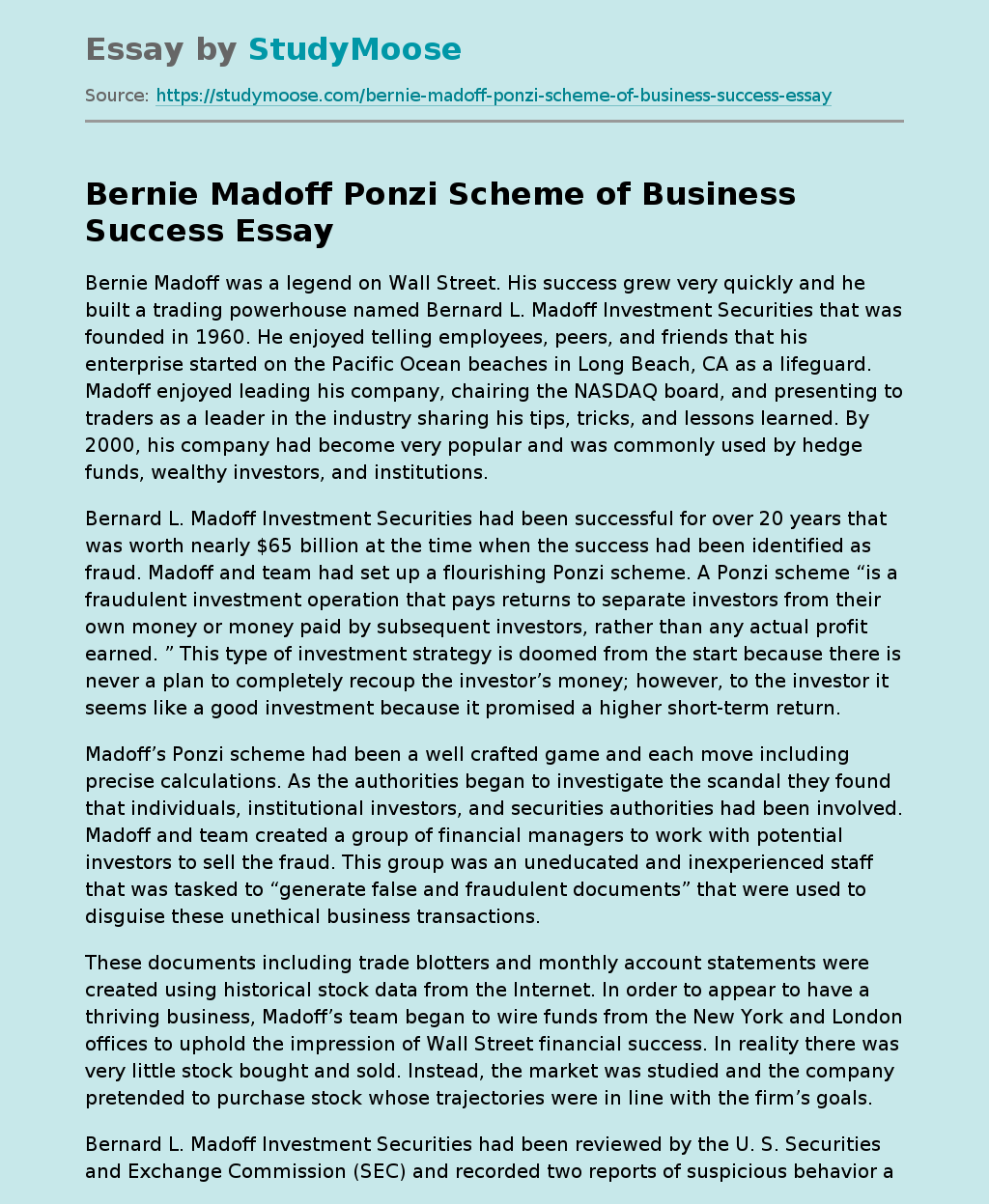