Amitav Ghosh (born July 11, 1956), is a Bengali Indian author best known for his work in English fiction Life : Amitav Ghosh was born in Calcutta on July 11, 1956 in a Bengali Hindu family, to Lieutenant Colonel Shailendra Chandra Ghosh, a retired officer of the pre-independence Indian Army, and was educated at The Doon School; St. Stephen’s College, Delhi, Delhi University, India; the Delhi School of Economics and St Edmund Hall, Oxford, where he was awarded a D. Phil. in social anthropology under the supervision of Peter Lienhardt.

His first job was at the Indian Express newspaper in New Delhi. Ghosh lives in New York with his wife, Deborah Baker, author of the Laura Riding biography In Extremis: The Life of Laura Riding(1993) and a senior editor at Little, Brown and Company. They have two children, Lila and Nayan. He has been a Fellow at theCentre for Studies in Social Sciences, Calcutta and Centre for Development Studies in Trivandrum. In 1999, Ghosh joined the faculty at Queens College, City University of New York, as Distinguished Professor in Comparative Literature.

He has also been avisiting professor to the English department of Harvard University since 2005.

Ghosh subsequently returned to India began working on the Ibis trilogy, of which two volumes have been published to date, Sea of Poppies and River of Smoke. He was awarded the Padma Shri by the Indian government in 2007.In 2009, he was elected a Fellow of the Royal Society of Literature. Work Ghosh is the author of The Circle of Reason (his 1986 debut novel), The Shadow Lines (1988), The Calcutta Chromosome (1995), The Glass Palace (2000), The Hungry Tide(2004), and Sea of Poppies (2008), the first volume of The Ibis trilogy, set in the 1830s, just before the Opium War, which encapsulates the colonial history of the East.

Ghosh’s latest work of fiction is River of Smoke (2011), the second volume of The Ibis trilogy. Most of his works deals with an historical setting, especially in the context of Indian Ocean world. In an interview with Mahmood Kooria, he said: “It was not intentional, but sometimes things are intentional without being intentional. Though it was never part of a planned venture and did not begin as a conscious project, I realise in hindsight that this is really what always interested me most: the Bay of Bengal, the Arabian Sea, the Indian Ocean, and the connections and the cross-connections between these regions.” Awards and recognitionsThe Circle of Reason won the Prix Médicis étranger, one of France’s top literary awards.The Shadow Lines won the Sahitya Akademi Award & the Ananda Puraskar.

The Calcutta Chromosome won the Arthur C. Clarke Award for 1997. Sea of Poppies was shortlisted for the 2008 Man Booker Prize.[10] It was the co-winner of the Vodafone Crossword Book Award in 2009, as well as co-winner of the 2010 Dan David Prize. River of Smoke was shortlisted for Man Asian Literary Prize 2011. Ghosh famously withdrew his novel The Glass Palace from consideration for Commonwealth Writers’ Prize, where it had been awarded the Best Novel in Eurasian section, citing his objections to the term “Commonwealth” and the unfairness of the English-language requirement specified in the rules. Subsequently, he landed in controversy over his acceptance of the Israeli literary award, the $1 million Dan David Prize. Ghosh’s notable non-fiction writings are In an Antique Land (1992), Dancing in Cambodia and At Large in Burma (1998), Countdown (1999), and The Imam and the Indian (2002, a large collection of essays on different themes such as fundamentalism, history of the novel, Egyptian culture, and literature).

Historical Factors and Their Narratives in Amitav Ghosh’s The Shadow Lines: A Critical Study

Amitav Ghosh has won many accolades for his fiction that is keenly intertwined with history. His fiction is characterized by strong themes that may be sometimes identified as historical novels. His themes involve emigration, exile, cultural displacement and uprooting. He illuminates the basic ironies, deep seated ambiguities and existential dilemmas of human condition. He, in one of the interviews, has observed, “Nobody has the choice of stepping away from history” and “For me, the value of the novel, as a form, is that it is able to incorporate elements of every aspect of life-history, natural history, rhetoric, politics, beliefs, religion, family, love, sexuality”. Amitav Ghosh’s success as historical novelist owes much to the distinctiveness of his well-researched narratives. He remarkably manifests a bygone era and vanished experiences to life through vividly realized detail. The better reference in this context is his celebrated second novel, “The Shadow Lines” (1988) which was published four years after the sectarian violence that shook New Delhi in the aftermath of the Prime Minister, Mrs. Indira Gandhi. This constitutes a logical background in the novel, and it makes readers probe various hammering facets of violence. Also, his treatment of violence in Calcutta and Dhaka in this novel is valid even today.

The novel is largely set against the backdrop of major historical events such as the Swadeshi movement, the Second World War, the partition of India, the communal riots of 1963-64 in Dhaka and Calcutta, the Maoist Movement, the India-China War, the India-Pakistan War and the fall of Dhaka from East Pakistan and the creation of Bangladesh. It is the story of the family and friends of the nameless narrator which has its roots in broader national and international experience. In the novel the past, present and future combine and melt together erasing any kind of line of demarcations. The text harps on the concerns of our period, the search for identity, the need for independence, the difficult relationship with colonial culture. It magnificently interweaves fact, fiction and reminiscence. It is a continuous narrative which replicates the pattern of violence not only of 1964 but also of 21st century. The fragmentary narratives unfold the narrator’s experiences in the form of memories which move backwards and forwards. While focusing upon the text of The Shadow Lines the paper aims at examining and elaborating Ghosh’s historical touches and their implications.

Amitav Ghosh has dealt with various themes in his novels. Some of the them include search for identity, traditions versus modernity, contemporary social problems etc. Ghosh attempts to perceive the lives of his contemporaries in lands as diverse as India, Bangladesh, Egypt, England etc. His canvas is often large and his novels are peopled with a variety of characters, though not in the range of a Tolstoy or a Dosteovesky. Every significant characters is delineated realistically, As a post colonial writer, cultural heritage and identity have become important facets of Ghosh’s personality. The ability of deep research that is seen in this novel is a quality not associated with Indian writers writing English. 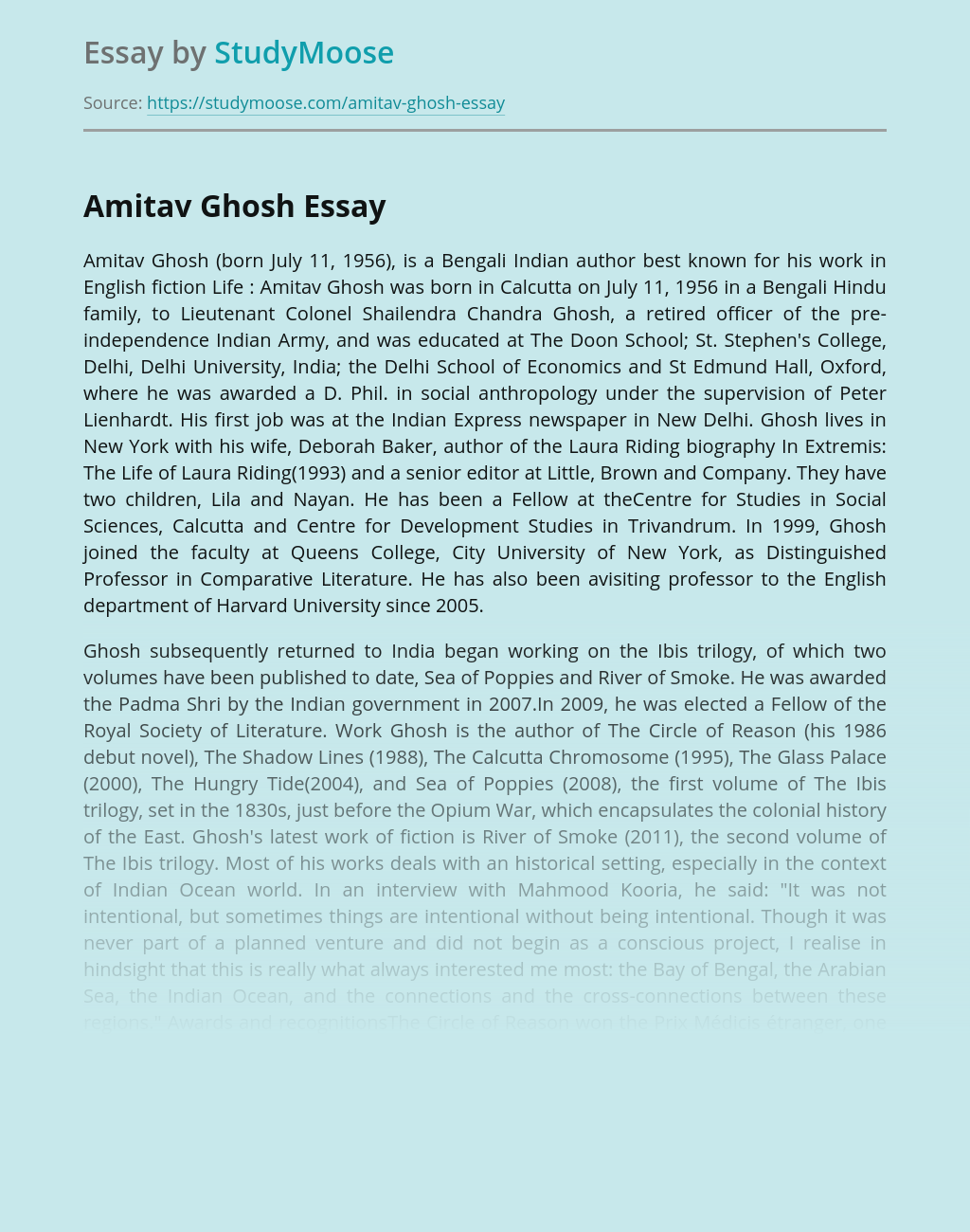