The book deals with social insecurity, racial prejudice and the rule of the consecutive church in a small town. Beka’s best friend Toycie Qualo is older than she is, being 17 at the time when Beka was 14, and in her last year of school gets herself expelled when she gets into a situation where she becomes pregnant by her boyfriend Emilio Villanueva, and dies after a miscarriage and a short space of time in the local asylum nicknamed “Sea Breeze Hotel”.

Turn in your highest-quality paper
Get a qualified writer to help you with
“ Beka Lamb by Zee Edgell ”
Get high-quality paper
NEW! AI matching with writer

Through flashbacks, points on politics and independence are strongly brought out, since the political struggles for independence in Belize at that time also mirrors Beka’s own need for self-rule and her developing maturity. Beka’s father (Bill Lamb) cuts down Beka’s favorite tree (a bougainvillea) as a sign that the wild ways Beka had picked up must stop at once when she finally tells him that she has failed her exam. Her mother (Lilla Lamb) buys her a special book and pen in which she is told to write any lies or stories that she is tempted to tell, in an effort to curb her tale-telling habit.

By the end of the book, Beka has transformed from “a flat-rate Belize creole” to a girl with “high mind”, since her troubles have forced her to learn the value of money, education, unity within the community and most of all, some manners and respect

Beka Lamb is the debut novel of Belizean author Zee Edgell. It is the story of both Beka and Belize, an adolescent girl and an adolescent country.

Set in Belize in the 1950s, fourteen-year-old Beka struggles with growing pains complicated by the society in which she lives while her country struggles to move from colonialism to independence.

The novel opens with three seminal events. The young Creole teen, Beka, has just won an essay contest at St. Cecilia’s Catholic school, Beka’s lifelong friend Toycie has died (but the traditional nine-day wake has not been held for her), and two members of the Belizean Peoples’ Independent Party, Pritchard and Gladsen, are imprisoned for disloyalty to the British government. These events symbolize the often painful challenge of coping with growth and change.

Narrated by flashbacks, the novel covers a period of seven months. While preparing for bed one night, Beka vows to “keep a wake” for her deceased
friend Toycie “in the privacy of her own heart.” As she reminisces about the past months “waking the gone,” her story unfolds. Beka recalls that her life started to change the day she decided to stop lying. Her last lie was a big one. Failing three subjects, Beka had not been promoted to the next grade.

Beka’s parents are struggling to pay for her private education. Fearing their reaction to her failure, Beka tells them that she passed, naively believing that they do not already suspect the truth. Beka’s lying habit is the most serious of the many conflicts she has with her parents. She does not clean the attic properly, she throws garbage into the yard, she steals money from her father’s pants pockets and she procrastinates with her chores. Beka’s mother, Lilla Lamb, often complains about Beka’s “laziness and ingratitude” to her husband, Bill Lamb, who then must discipline Beka. Beka seeks solace from her friend Toycie and her paternal grandmother, Granny Ivy, who shares a bedroom with Beka and usually takes her side.

In spite of these parent-teen conflicts, Beka does have a loving relationship with her parents. Her family is one of only two nuclear families in the community, and while her parents do not love all that Beka does, they do love her. Beka begs her father for a second chance at school, promising to pass this time, and Bill Lamb eventually relents. A nun at Beka’s school, Sister Gabriela, takes Beka under… 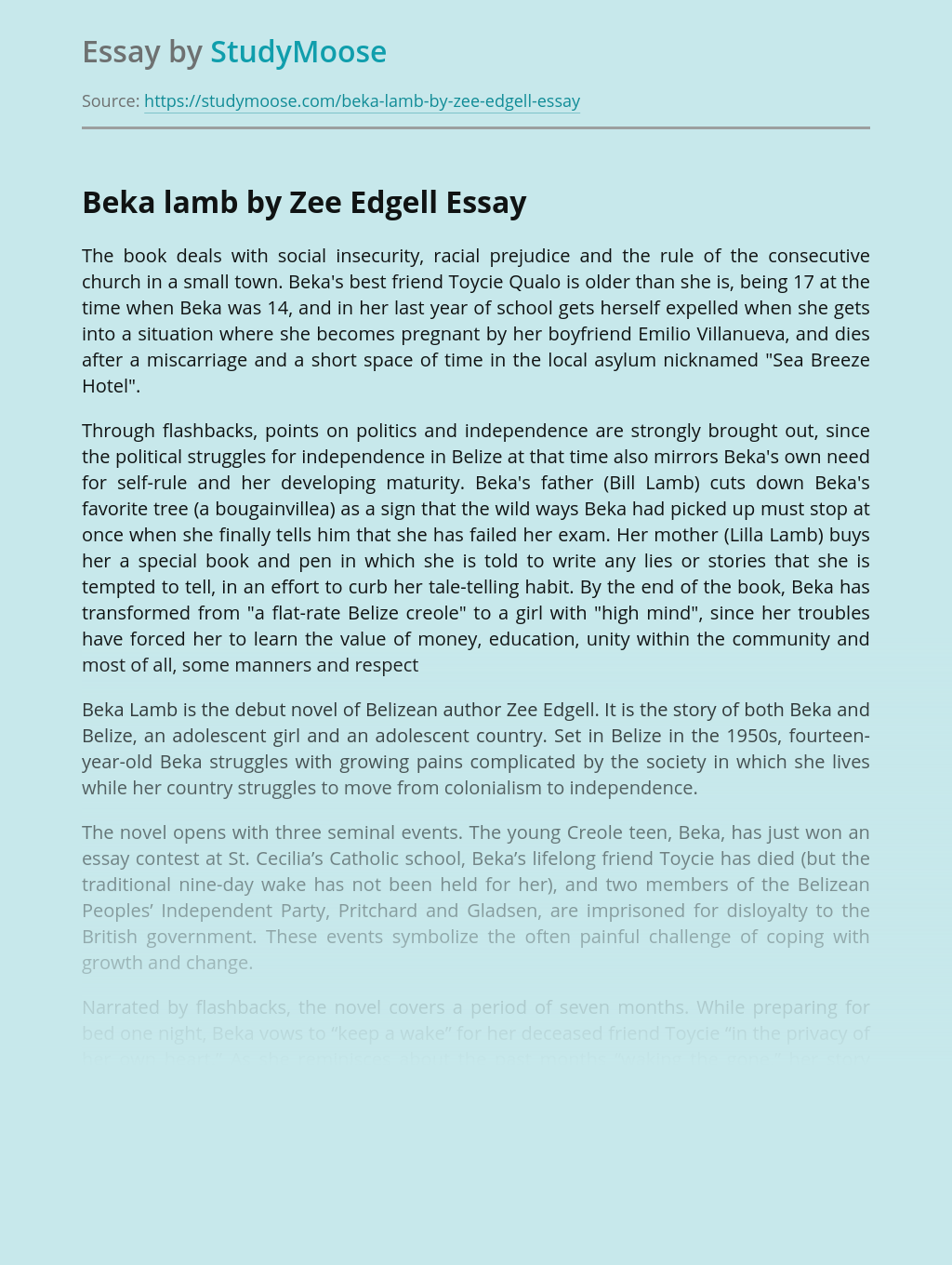 Turn in your highest-quality paper
Get a qualified writer to help you with
“ Beka Lamb by Zee Edgell ”
Get high-quality paper
Helping students since 2015
Stay Safe, Stay Original