In both “Bayonet Charge” and “Remains”, we are presented with the idea that war is haunting and inescapable perhaps in a similar way to PTSD. “Bayonet Charge” seems to indicate how the realities of war are still very poignant and real, whereas in “Remains” the memories seem distant, as if the solider has become numb to it.

Interestingly, both poems begin in the midst of war. The adverb “suddenly” in “Bayonet Charge” immediately instils a sense of action and motion, mixed with fear and a release of apprehension.

Don't use plagiarized sources. Get your custom essay on
“ “Bayonet Charge” and “Remains” Comprassion ”
Get custom paper
NEW! smart matching with writer

The fact that this poem is also written from the point of view of a person looking in on someone else’s life, could be representative of how soldiers often feel out of place when returning home as if their minds are still at war. It could also indicate how, when at war, you are a different person to when you return home. In this sense, the third person tense could demonstrate how war alters your being and affects you during and after it takes place.

In “Remains”, however, the memories seem just as intense, but perhaps the solider is used to them, which indicates that the effect on the two men was different. The poet uses ominous, unusual words such as “perhaps” and “possibly” which could suggest that the soldier doesn’t remember much detail about what happened during war. This could be because he is trying to forget, or because death and tragedy are too common that he has become used to it.

Ted Hughes also uses colloquial language in “Bayonet Charge”, but to connote a different effect. He use the phrase “etcetera” following a list of positive words: “king, honour, human dignity”, to show that these things are extinguished during war and, unlike unwanted memories, are forgotten easily. Conversely, the use of colloquial language in “Remains” does the opposite. It, instead, indicates how numb war has made him to violence. Rather than being appalled for human life, Armitage is attempting to show the ways in which people become de-sensitised to the “blood”, “death” and “guts” of friends and companions.

Significantly, “Bayonet Charge” is written in equal stanzas, brimming with punctuation and power, and littered with enjambment. Perhaps the regimental structure could indicate life in the military, like the continuous formality of a team or unit. The punctuated pauses could be symbolic of how death and injury causes physical pauses and emotional pauses in a soldier’s day. It could also represent how, even once a solider has returned from a placement, war memories can break up the pattern of their day and ruin the flow of life, because the punctuation stunts the flow of the poem. In fact, the enjambment in both poems could signify how the feeling of being haunted never leaves you and is constantly running within you. 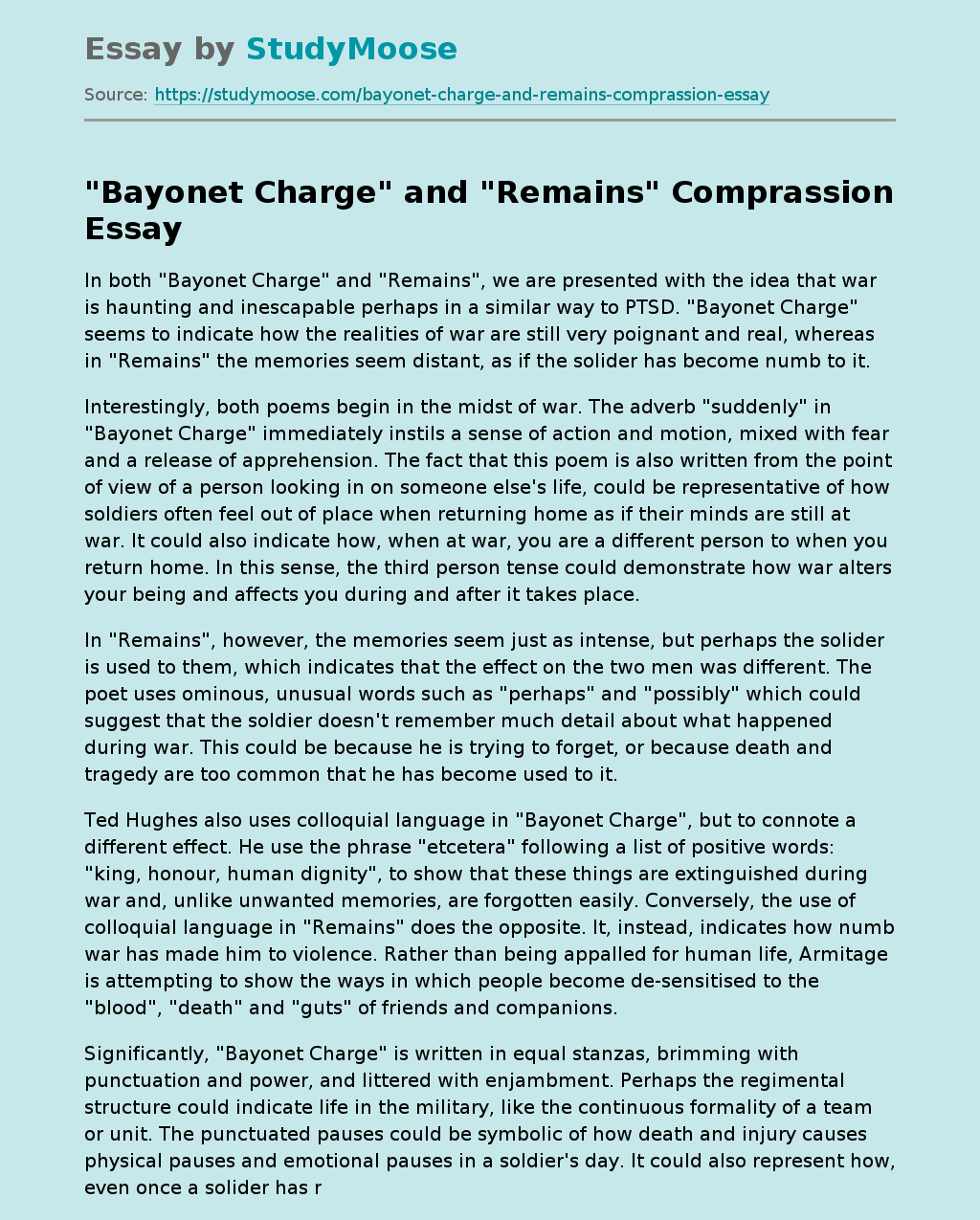