Barry Humphries has significantly impacted Australian comedic culture and theatrical culture in terms of both continuity, change, beliefs and values. Barry’s childhood began in the town of Kew, Melbourne on the 17th of February 1934. During this era, Australian society had a scarce economic decline due to the great depression therefore, aussie’s had to make their own fun by television, board games and outdoor activities. From a young age, he enjoyed entertaining people. His multiple alter egos stemmed from the inspiration of his parents and the society he was brought up in.

Barry Humphries (John Barry Humphries) was come to be developed as not only a comedian but a satirist, actor, writer and so much more in his 85 years. His parents Eric Humphries and Louisa Humphries were loving parents and created Barry’s childhood into a happy one.

From a young age he loved to entertain people by dressing up in different characters (The Famous People 2018). Throughout his education he attended prestigious schools such as Camberwell Grammar school and then later on to Melbourne Grammar School. Humphries studied the Fine Arts, Law and Philosophy at University but two years later dropped out. In 1952 after Barry dropped out, he began to get involved with ‘Dada’, an art movement. He later made his first theatrical journey to Adelaide to compete in a university drama festival.

He headed to London during the 60s to pursue his career which began in earnest. (University of South Australia, Prof Lloyd).

At a young age of just 21, Barry Humphries’s first and most successful alter ego was introduced. Edna Everage. For almost 8 decades, Humphries has been providing audiences with his talented performances all over the world. The era that he started performing was the mid 1950s. During this time, Australian society, experienced its major economic boom which lead the society to be joyous and content. During the 60s, Barry presented his first one- man show to British audiences and then later introduced Edna Everage which started his world-wide success. The London society drastically differed from Australian, London had transformed from the bleak, conservative city it was in the 50s, to the capital of the world, full of freedom. The technicolour society was the centre of excitement where anything was possible (Historic UK, Kimberly Watson).

The influence of Barry’s parents pushing him to achieve his goals and the inspiration of the happy and bubbly society in both Australia and London were utilised to create his popular multi million-dollar personas. Barry Humphries toured with Shakespeare’s ‘Fifth Night’ which lead him to the inspiration of Dame Edna. (The man inside Dame Edna, Adrian Sibley) Barry quotes in an ABC interview that he drew inspiration from his mother and was in denial about it for many years to protect her feelings. The comedian’s alter ego Dame Edna play an important part in today’s society to not only inspire but encourage Barry by her ability to change. Barry wishes his audience does the same by pausing, reflecting for a moment and pass on their immutable way (The Australian, 2009)

Barry Humphries in many ways was truly original and ground breaking. He is something unique, his longevity proves this. No comedian or satirist has Humphries style and panache. There are not many performers who manage to continuously contribute to the arts and the theatrical industry in such a broad scope. For 6 decades, Humphries has been packing in audiences at such a level of excellence. ‘He introduced the world to Australian life, it’s warmth, it’s unique personality and it’s evolution over the decades (Professor David Lloyd). His uniqueness is expressed through his beautiful frocks and extravagant makeup. ‘People only watch my shows for me, and those shows have remained evergreen long after the guests are forgotten. Always wear beautiful clothes, preferably a different frock for every show, and don’t overdo the hospitality beforehand’ quoted by Barry Humphries.

Barry Humphries brought about significant change in Australian society as a result of their contribution to popular culture. The theatrical industry was positively impacted by Barry Humphries’s outgoing personality and his creativity. Humphries received the inaugural Britain- Australia society award of recognition for his 60 years of bringing Aussie larrikinism to audiences in Britain and beyond (News.com). The comedian helped launch and co- founded the Melbourne International Comedy Festival in 1987. Due to this, the top prize has been named in his honour since 2000 – the Barry Award (BBC 2018). The University of South Australia rewarded Barry Humphries with an honorary doctorate for his momentous participation in the arts industry. His talent, creativity, invention and intellect have delivered insightful critiques of Australian culture, but at the same time helped to shape that culture for future generations (Prof Lloyd, University of South Australia). This shows that Barry Humphries has impacted and brought about change in not only Australian society but the arts society also.

All this proves that Barry Humphries significantly impacted comedic and theatrical culture, in terms of both continuity, change, beliefs and values. From a young age, it is proved that he loved entertaining people and was extremely passionate on the Arts. The era and society that Humphries started performing was drastically different to today society which makes it clear that the older generation can be as successful as the younger. The inspirations drawn from society at the time and from his parents, benefitted him and his audience majorly resulting in a truly original performance. His uniqueness and style were one of a kind. The change in society as a result in his contribution toward multiple organisations and companies is extravagant. Therefore, Barry Humphries has definitely made a significant impact on Australian popular culture and will continue to light up faces when he appears either on television or on stage. 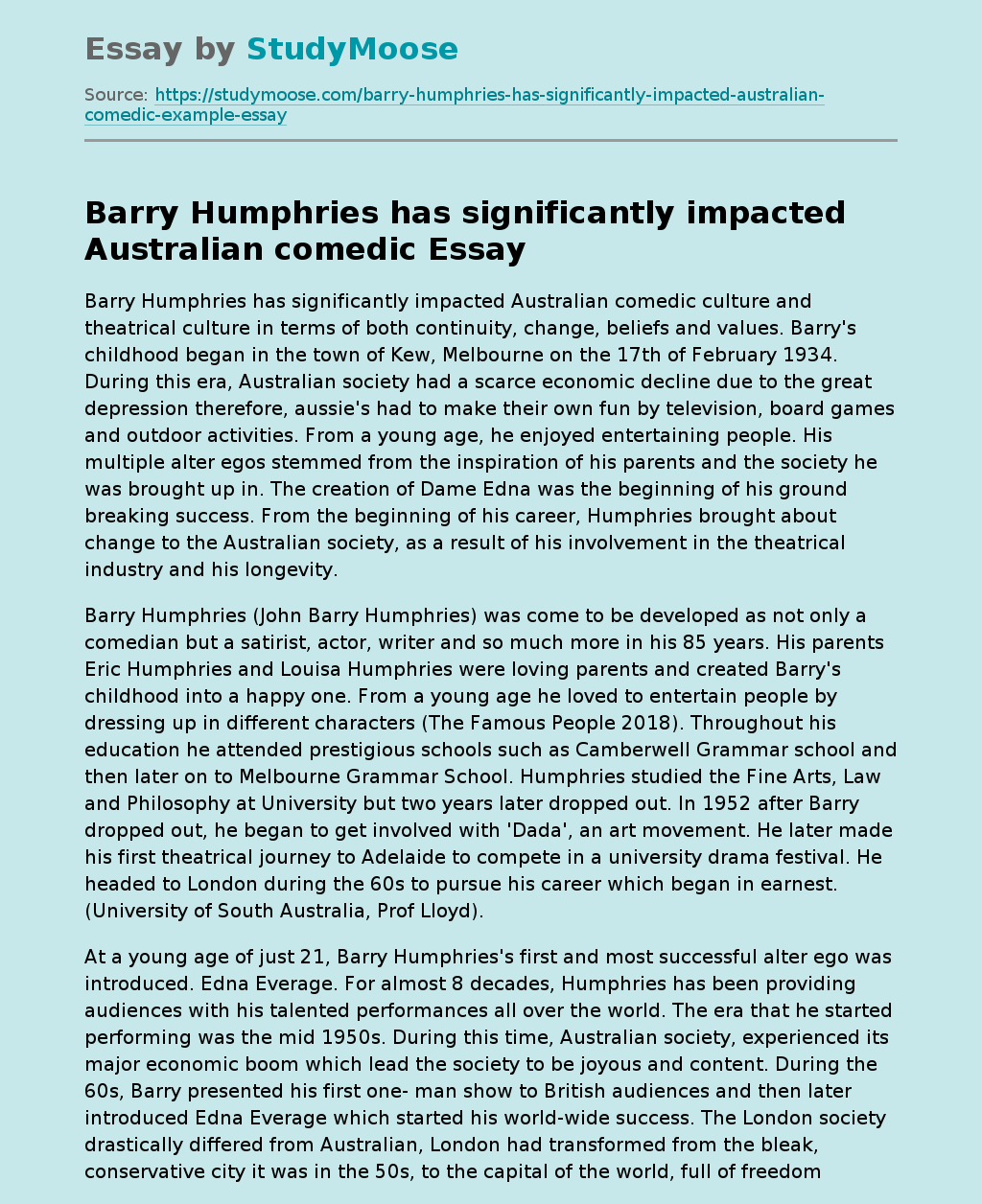