The Green Table is a ballet choreographed by Kurt Jooss. Jooss lived in Germany from 1901 to 1979 and choreographed the Green Table in 1932. He called this piece the ‘dance of death’ because of its focus on war. The Green Table is separated into nine scenes, each of them showing the different aspects of war and death. The first scene is titled ‘Gentlemen in Black’ and is a group of high-class men in suits and gloves arguing through dance over a large green table.

Don't use plagiarized sources. Get your custom essay on
“ Ballet The Green Table ”
Get custom paper
NEW! smart matching with writer

Their flowy movements and gestures are very literal but the men never make contact with another. By the end of this scene, an agreement is obviously not an option for these men and as they shoot their guns into the air, I felt these men decided to go to war over this disagreement, but because they never make contact it shows that they don’t see the full impact (especially deaths) that this war will bring to the lower class people they represent.

The second scene is a solo from the figure of death. The lighting is very dark and the intense, rhythmic music builds extreme tension. As he moved his feet to the beat, it gives a very creepy sense of time. The figure of death enters and exits into complete darkness on stage, which continues on for the entire piece. The third scene is the farewells, where the soldiers, guided by a man with a white flag, say goodbye to their women and follow death offstage symbolizing them going off to war.

Throughout this entire scene, death stays downstage continuing his ‘keeping time’ with the music. Also in this scene, we are introduced to the profiteer who claps along with the beat death keeps and seems to be pleased by the sad scene going on. This scene is where I start to feel depressed and hopeless with human nature with the introduction of the profiteer I have to wonder how anyone can be happy with war tearing families apart. The fourth scene is the battle scene, the white flag from the farewells is no longer white, it looks stained with red to symbolize the bloodshed. In this scene, the soldiers make extreme physical contact, and as they fight death comes out and takes the men one by one. Death continues to come from the dark and only appears at the last second before he takes each soldier. At the end of this scene, the profiteer uses very literal gestures to show that he is robbing the corpses death has left, his facials show how happy the profiteer is to gain the goods he stole from the bodies. This scene even furthers the hopelessness I began to feel from the farewells, the disappointment from the horrid intensions of the profiteer continue and the physical contact made by the soldiers displays the unfair separation of status between the arguing government officials and the lower class men who are the ones doing the real fighting.

The fifth scene is called the Refugees, this is a dance where women are seen doing very heavy movements and through ducking, hugging, and supporting each other’s weight it is obvious they are lost and in distress. At the end of this scene death comes out from the dark and takes an older woman, who seems to go willingly and follows death offstage. The sixth scene in this piece is called the Partisan; it is a solo of a woman who seems to be having an internal struggle and kills a man with her scarf. After this act, death appears and although the woman does struggle, death ends up taking her. This scene is another that I feel hopeless when watching, not only does this women decide to kill an innocent man, but she also resists death to represent resisting her punishment. The seventh scene is The Brothel where the profiteer has set up a whorehouse for soldiers.

The girl is tossed from man to man and keeps her hand up as if afraid to even touch them, she runs across the stage but is unable to leave, the men manipulate her movements, and by the time one man seems through his soft gestures and facials seems to care for the woman, death comes for her. This is another depressing scene because of the woman forced into the brothel, but mainly I feel sad that by the time this woman has found someone who cares for her, her life was up and she never got the chance to love him. The eighth scene is the Aftermath, where death dances with all of his victims. The dancers seem heavy, and their synchronized movements lack any emotion or life symbolizing that they are no longer alive. At the end, death dances his solo again and continues his ‘ticking’. The very last part of this piece is another scene of The Gentlemen in Black. The same men do the same repetitive motions showing arguing but end in a gesture representing thought, with no progress or agreement made.

These scenes overall really made me feel hopeless about human’s deceiving, selfish, and combative nature. This piece showed the endless cycle these characters go through in this war and end up doing the same thing at the exact same table, no more decisive than when they started. And how at even the worst times when men dedicate their lives to go fight for their country people like the partisan and profiteer take advantage of those people’s weaknesses and use them to prey for their own selfish gain. The most emotion this evokes for me is how the Gentlemen in Black are on this government-run pedestal and because of their disagreements, these men have to go to war but the gentlemen wont even make the slightest bit of contact with each other.

At the end of the video of this piece there was a quote from Kurt Jooss, “I am firmly convinced that art should never be political, that art should not dream of altering peoples convictions… I don’t think any war will be shorter or avoided by sending audiences into “The Green Table.” This quote clearly explains that Jooss’ intentions were not to influence politics, but simply to display the endless cycle of war in an art form. I think he did this very well, and although the piece was overall made me feel pessimistic about human nature, I feel the structure, supporting elements, and choreography were all done incredibly well. I liked this piece very much. 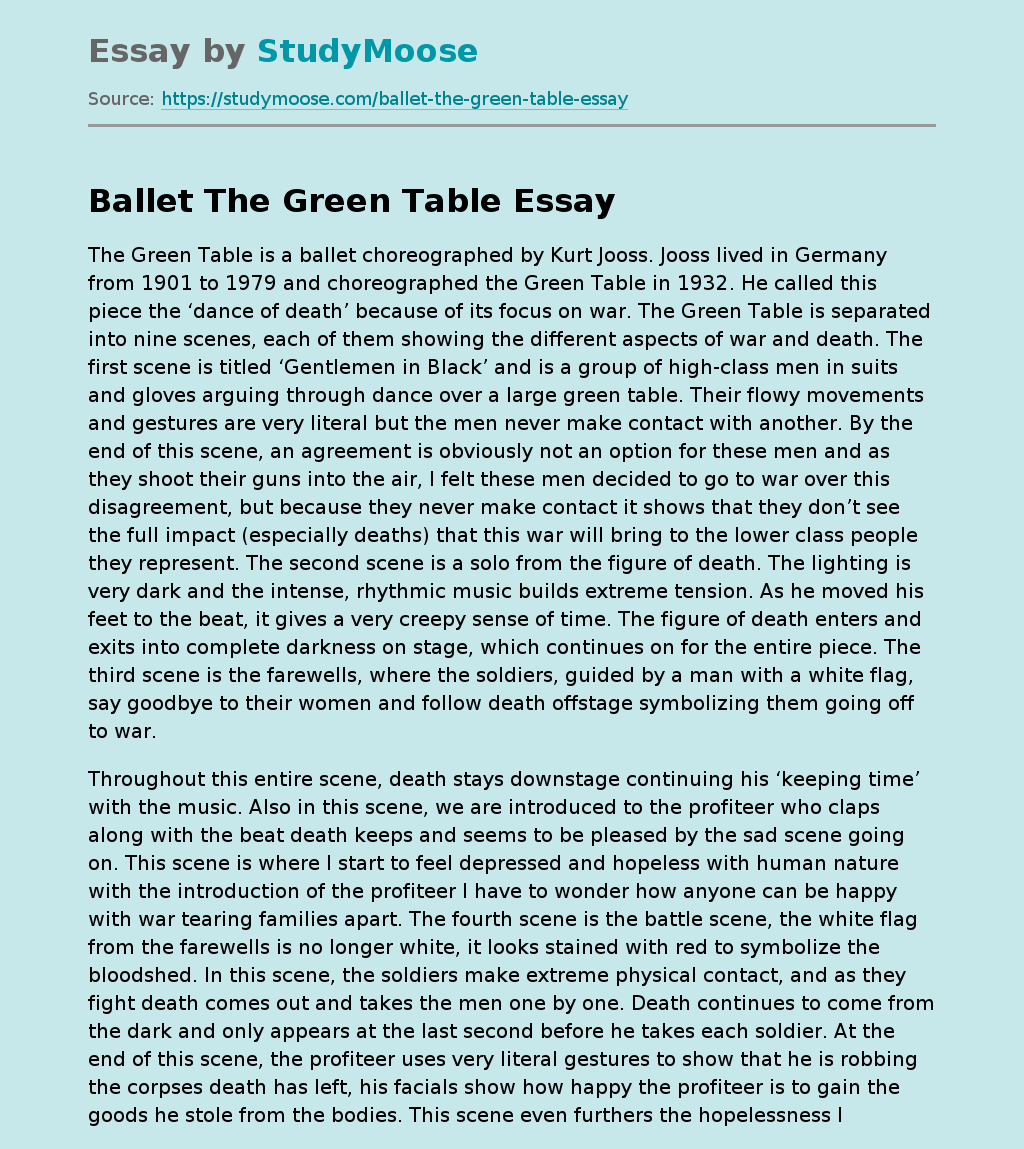