Almost, every family has secrets and demons buried deep down inside that they try to either defeat or hide in hope of retaining a normal life. In August Wilson’s, play Fences, it clearly unveils a hidden secret about a noble man with a tragic flaw named Troy Maxson, who suffered mentally from injustice and racial segregation while trying to obtain the American Dream. Wilson, portrayal Troy as talented black Negro League slugger who dream of being accepted into the Major League.

Unfortunately, his race and old age prohibited his chance at succeeding; which ended up damaging him emotionally and economically. Furthermore, this explains the issues with anger, injustice, and prejudice that Troy has bundled up inside him. While trying to maintain a normal life Troy felt so suffocated and trapped in a world of turmoil. So far, he was a supportive and loving husband to his family but at times he fell short of his responsibilities. The hardships that occurred in Troy’s life made him resentful through his misconceptions of the world that he felt thwart him out of every deserving opportunity.

However, to disguise his failures with everyday life, Troy makes a judgment error which negatively impacts his family through the financial burden, infidelity, and an embattled relationship with his son.

Throughout the film Fences, Wilson sheds light on how racial segregation can create a totally different outlook on financial and economic burden between blacks and whites. Racism plays a life-long role in Troy Maxson’s struggle and it is also the power behind his rebellious actions.

While trying to cope with his grudge from being denied entry to the Major League Baseball a financial instability was created, and it weighed heavily on him. Unfortunately, being uneducated he had to settle for a low paying job as a garbage collector, an unskilled job that barely put food on the table and reminds Troy constantly how far he has fallen from his dreams (Gantt 10). On the other hand, Troy felt like segregated society had put steep restrictions on the economy making it extremely hard for African American to qualify for jobs. For instance, in the 1950s during segregation African American men were not giving the same opportunity nor were they qualified to drive the sanitation truck. This sparked a fire in Troy, he felt as if Africa Americans should have the same equal rights as Caucasian for a job opportunity. According to Wilson, Troy was extremely fierce about the job discrimination and ask his boss Mr. Rand for a meeting saying “Why? Why you got the white men driving and the colored men lifting?” You only think white fellows got sense enough to drive a truck” (Wilson 2008, 10). He refused to let discrimination put him at another disadvantage in life. Troy filed a complaint at his job stating that blacks are not allowed to drive the sanitation trucks. As a result, of his complaint, Troy won his case becoming the first African American driver for the sanitation department in Pittsburgh. If Troy Maxson did not stand up and fight for equal rights he would still be struggling in poverty. Sadly, to say racial segregation during the 1950s have caused many African American families to suffer financially and economically due to lack of equal opportunities.

In the movie Fences, infidelity plays a major role in the main character Troy Maxon. However, when Rose’s life becomes tangled in Troy’s, the more resentment he feels about the responsibilities she represents, and the more he wants to escape her (Gnatt 11). It is crystal clear that Troy felt trapped in society and wanted to be free from all his responsibilities. Despite his marital vows Troy turns to the outside worldly things and commits infidelity where an outside child is born into their marriage. Troy hidden skeletons were no longer a secret due to the fact his mistress Alberta dies in childbirth forcing him to explain to Rose why he needs to make arrangement to pick the baby up from the hospital. From that day forward the Maxson family begin to fall apart and resist each other all because of hurt and trust issues.

Troy has an embattled relationship with his sons Cory and Lyon due to his own selfish reason. Struggling with his past demons Troy became an abusive and controlling father towards his son Cory. Also, Cory followed his father footsteps as a talented star athlete who dreams of playing professional ball, whereas, Lyon was a talented musician. Cory’s hard work and determination to excel in football earned his spot at being recruited. However, Troy refuses to support either one of son’s dreams based off his experience of being denied entry into the Major League. For instance, when Troy was informed that a recruiter was coming to see Cory play, the embattled relationship among the two grow. Cory became emotional and hurt that his father refused to sign the permission papers that would have allow him to play college football. He replied out of anger saying! ‘You ain’t never gave me nothing! You ain’t never done nothing but hold me back. Afraid I was gonna be better than you. All you ever did was try and make me scared of you. I used to tremble every time you called my name. You can’t whup me no more. You’re too old. You just an old man’ (Wilson 1970). Troy was so furious at his son for being disrespectful he launched at Cory with a baseball bat and orders him to get out, however, Cory left and join the Army. Sadly, the last time Cory ever saw his father again was the funeral looking over him in a casket. An embattled relationship between a parent and child will destroy a loving family.

In conclusion, the only hidden secret in this film is the fences society builds around us and those we construct, willingly or unwillingly (Gnatt 10). Throughout the entire film, the viewers can perceive that racial segregation is a small Pittsburgh town during the 1950s led Troy to feel suffocated and trapped in life. His hopeless attempts to escape his own secrets and demons caused him to become his worst enemy in society due to his misconceptions of the world. As a result, he struggled with a financial burden, infidelity, and an embattled relationship throughout life. 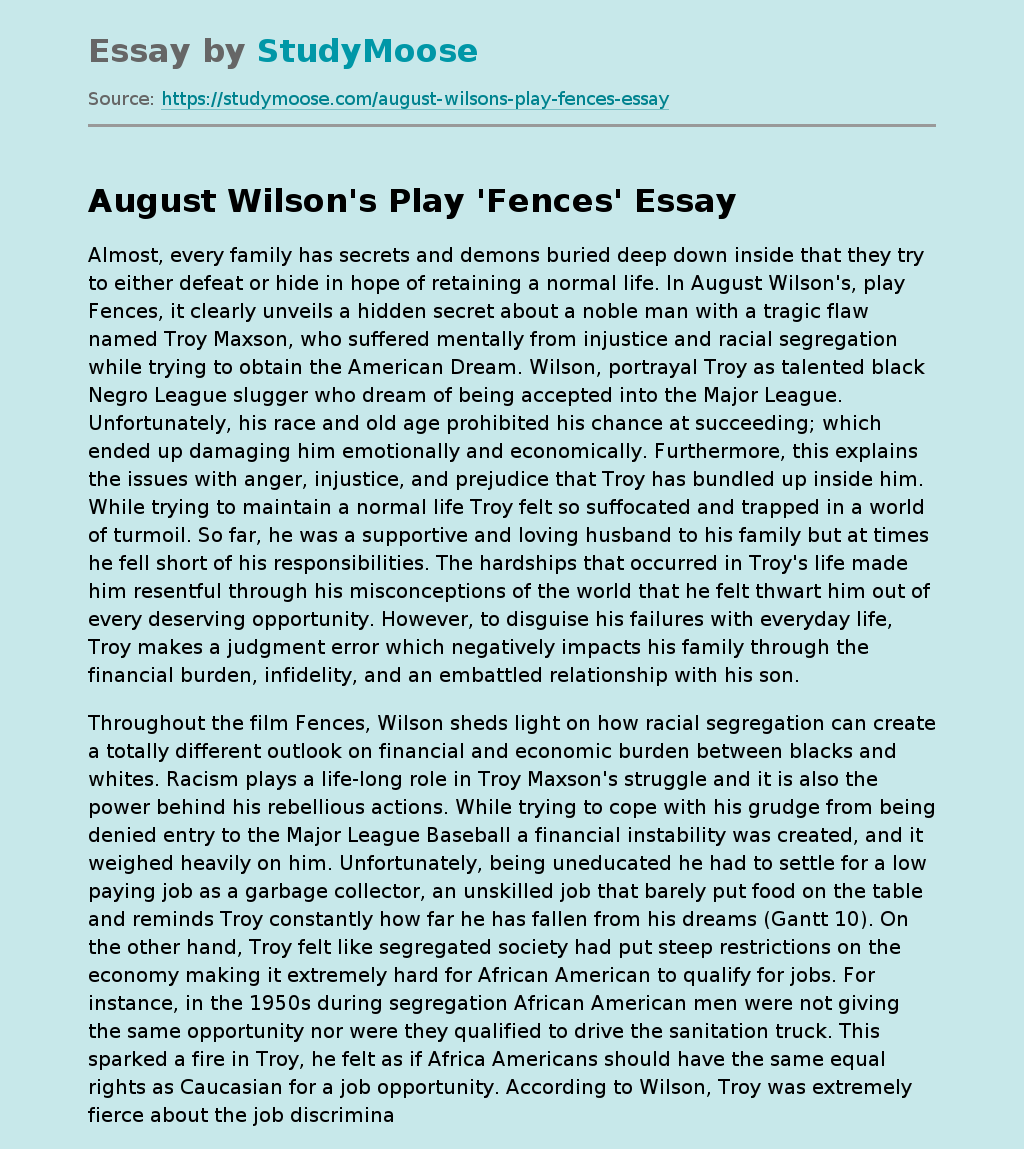