The Road To Self-Acceptance

Individuals develop resilience and empathy through natural processes and experiences, they can seek support from family, friends, or even others who can relate to certain situations. The road to self-acceptance is often through dealing with instances that cause stress, which in the long run can help many aspects of life. In the novel Indian Horse, Richard Wagamese explores the ideas of individuals recovering from difficult situations and how the ability to understand affects them. In an attempt to endure suffering, individuals may delude themselves from reality, which can then result in negative outcomes that can lead to self-discovery.

Don't use plagiarized sources. Get your custom essay on
“ The Road To Self-Acceptance ”
Get custom paper
NEW! smart matching with writer

In this case, Saul, who was taken to a residential school, witnesses scarring incidents that haunt him. As a way to cope, he turns to hockey, a sport that eases his pain. When he decides to go play for the NHL, he learns the true nature of the outside world. This causes him to turn to alcohol, which causes damage to his state of mind.

Saul eventually learns to accept and forgive, which pushes him to take an interest in coaching other Indian boys to play hockey.

Although many of us have never suffered, people of all ages around the world have to unwillingly endure toxic environments. Life at St.Jerome’s was terrible, but Saul and the other children found small ways of being happy. Yet most activities remind them of their tragic situation, being torn away from their families and experiencing “loss of life” As Saul observes “young boys and girls die standing on their own two feet”, he realizes that the school’s purpose was to break Indians down and strip their identity.

The consumption of trauma and pain would then lead to many horrible deaths. As a promise to himself, Saul remained strong to never leave them to see him as vulnerable. When Saul experienced such grief, his focus was pushed toward hockey. It helped Saul escape from his miseries, and gave him a sense of hope. whenever he played “Saul Indian Horse…ceased to exist”, he could escape a tragic filled life through the sport. He wasn’t the little boy who was ripped from his family anymore, he was just Saul. A boy who loved the game of hockey, but would soon realize society’s true perspective on Indians.

Realization can come as a shock to many which can ultimately lead to unfavorable decisions that can impact an individual’s quality of life. After reluctantly accepting an offer to play at a professional level of hockey, Saul became the only Indian on his team, which lead him to feel alienated and uncomfortable. His teammates acted “indifferent” towards him and continued to look down on him because he wasn’t white. But even so, they couldn’t ignore his talent, so he was appointed to center. But when sports journalists praise Saul’s performance, they do so in a way that uses aggressive stereotyping. As a result, Saul finds it harder and harder to control his anger. Eventually, he breaks down and begins fighting back. He decides that if [“they wanted him to be a savage, that’s what he would give them”]. Saul has so much pent-up anger and frustration that he can’t seem to help himself from simply responding with violence to the violence that has, for years, been directed at him. This results in Saul leaving the team for good. Like his parents before him, Saul becomes an alcoholic as a reaction to the tragic turn his life has taken. He found alcohol as an “antidote to exile”, to numb the pain of having his dreams taken away from him.

Recovery can come in many different forms such as acceptance, forgiveness, etc.

The Road To Self-Acceptance. (2019, Dec 02). Retrieved from https://studymoose.com/as-individuals-develop-resilience-and-empathy-through-example-essay 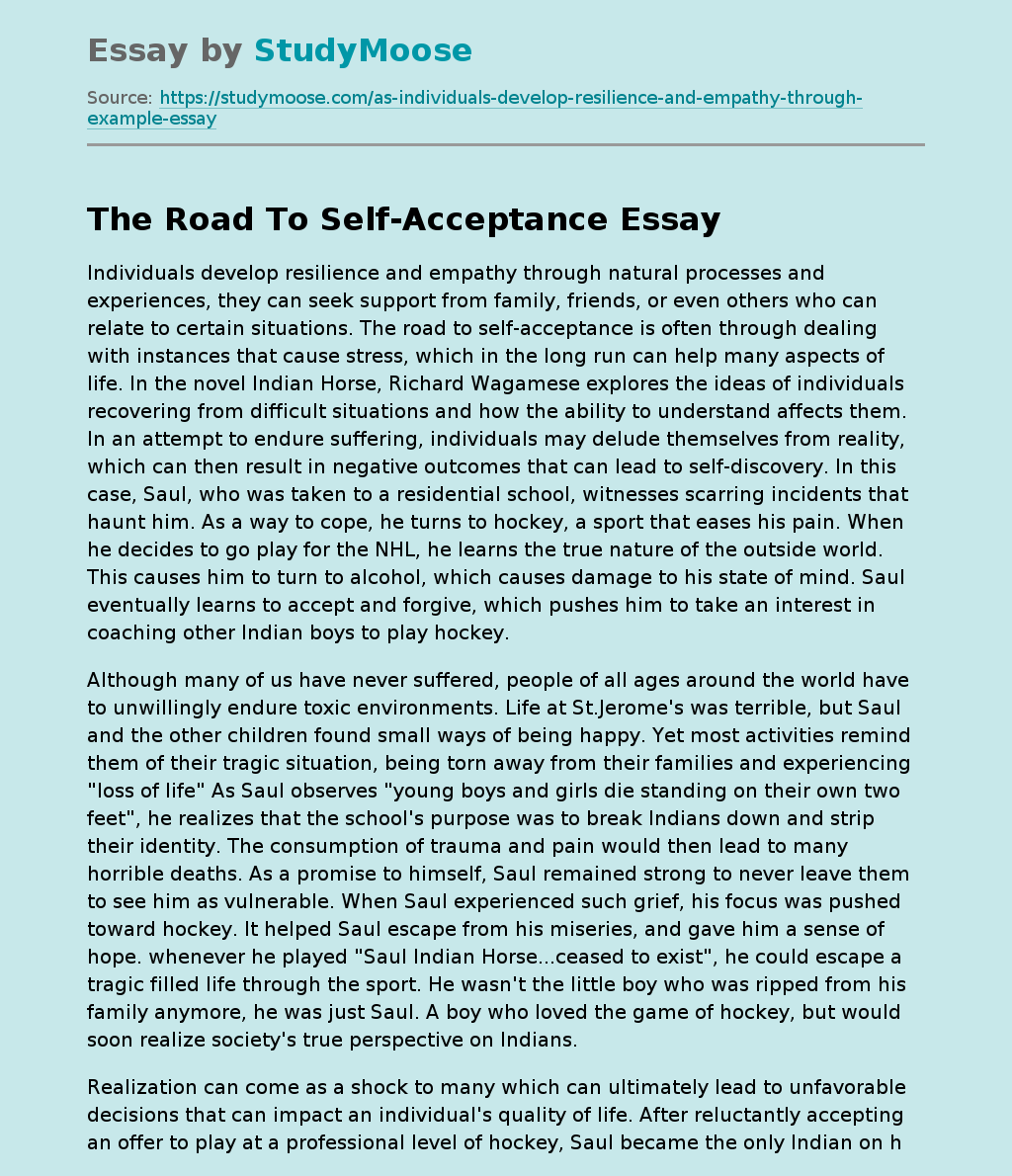