How do you think schools should be run? Think about it on different levels: from the staff to the lunches, and even the curriculum. The American educational system is a topic of much debate, yet many still don’t want to face the facts or talk about the real problems we face within it. The two articles that were required for reading for this essay have many similarities and differences. For starters, both authors look at the research done on educational systems by two different people who traveled abroad to explore why some foreign countries are academically more successful than the United States.

Both readings are focused on the world’s educational superpower, Finland, as well as South Korea and Poland. These people who traveled to observe also wrote books on their findings, not as a guide, but to simply encourage changing our ways of thinking about educational reform.

While Bledsoe and Ripley focus more on the differences of general educational foundations such as sports, technology, and teachers, Partenen and Sahlberg contrast a vast array of topics and also compares the similarities.

Proficient in: The Present Education System

Now, I will take a closer look at both articles and pull them apart, much like the writing styles that both of the authors implemented in their writing. It is evident that the education system here in the United States needs much improvement. Every three years, the Organization for Economic Co-Operation and Development (OECD) conducts a survey and in 2000, they concluded that with excessively high survey scores on the Programme for International Student Assessment (PISA), South Korea and Finland rank among the best educational systems in the world, with Poland trailing behind.

Partanen notes that in 2009, Shanghai, China took the lead in the survey, but Finland still remains amongst the very top of the list. Apparently, a country’s economic well-being is a significant factor in academic success.

Although Poland and the United States are at the same poverty level, Poland has shown great progress in recent years, unlike our country. This is due to the differences in the way the systems are run. As Time magazine reporter Amanda Ripley followed three exchange students to the United States, she observed the obvious differences and similarities in our educational system compared to other countries where academic success levels are much higher and documented it all in her book called The Smartest Kids in the World. (Bledsoe) Christie Bledsoe talks about Ripley and the points she makes – and doesn’t make — in her book. The first difference starts with the teachers. In other countries, teachers are typically paid more and tend to be more engaged with their class as well as preparing rigorous curriculum (Bledsoe). Partanen compares Finland with American and East Asian countries, pointing out that instead of “long hours of exhaustive cramming and rote memorization” (Partanen 970) the school system focuses on engaging their students in creative play and giving less homework.

Persons wishing to be certified in teacher-education programs must also have high entrance exam scores. In the United States, the teaching profession is undervalued and has low standards. As a result, there is a shortage of teachers in subjects that are most important such as science, technology, English, and mathematics (also known as STEM here at YSU). Colleges are certifying more teachers than what is needed in our country, and Ripley says that “administrators and other school leaders should be highly selective in hiring [only] the best teachers; yet, teacher quality has not improved.” There are some other considerations to keep in mind when comparing our education system with other countries, such as the availability of resources, technology, and materials. In Anu Partanen’s excerpt, she discusses the works of an important Finnish authority in education reform, Pasi Sahlberg. Sahlberg’s book Finnish Lessons: What Can the World Learn from Educational Change in Finland? talks about his visit to the Dwight School in New York City, which is a privately-run for-profit school that charges a yearly $35,000 tuition fee! There, he discussed educational reform with both students and educators.

A big point he made was that there are no private schools or universities in Finland. Instead, they are all publicly funded. Nobody in the room merely commented on his statement because he thinks that it is one of the issues that no American likes to talk about (Partanen 971). That’s true – Americans need a reality check because they need to face the facts and stop living in a dream world. Sahlberg goes on to talk about population size and homogeneity. Although Finland has become less homogenous and more populated by different nationalities, the ways of running their educational system remains unchanged. Here’s an interesting statistic: “[…] as of 2010, just 4.6 percent of Finnish residents had been born in another country, compared with 12.7 percent in the United States. But the number of foreign-born residents in Finland doubled during the decade leading up to 2010, and the country didn’t lose its edge in education. Immigrants tended to concentrate in certain areas, causing some schools to become much more mixed than others, yet there has not been much change in the remarkable lack of variation between Finnish schools in the PISA surveys across the same period” (Partanen 974).

The point the author is trying to make is that although homogeneity and population could be a contributing factor in the variations of our educational systems, it has not affected Finland and can be done in other countries. Ripley observed that the United states has more available technology than schools in Poland, Finland, and South Korea, which has forced students in foreign countries to use their critical thinking skills rather than focusing on technological skills. Another factor contributing to better education systems is the emphasis on sports. Students abroad are minimally involved in sports and recreation, hence reducing student spending and redirecting the extra funds to needier schools. Finnish students participate in more physical fitness, recess, and art. Exchange students experienced more freedom of choice in other foreign countries when it came to schoolwork and recreation.

Another fact that one exchange student, Kim, pointed out was that parents are more involved with fundraisers and sports in America, whereas Finland has stronger parent-student relationships, meaning that parents get involved in the learning material and even read to their children! While there are many differences between our country and foreign countries’ educational systems, there are some things that they do have in common and that is competitiveness. Partanen agrees that with the decline of the manufacturing industry and natural resources, we need to resort to making a “knowledge-based economy” that preserves competitiveness. She says that we should give all students an equal opportunity to acquire the same education as everyone else. Sahlberg makes a good point when he says that the United States didn’t think we could travel to the moon, but it was eventually accomplished, just like Martin Luther King who had a dream that came true.

This same concept should be applied to other debatable topics as well. He notes that even though many people in Finland said that education reform could not be achieved, it was done. The message behind this is to keep dreaming and think outside of the box. People believe that studying foreign countries’ educational systems could be beneficial in rethinking the way we run our schools here in the United States. In Bledsoe’s article, she states, “Ripley uncovered the secret to the academic success of pupils in this seemingly dreary system: students spent many hours after school with private tutors to prepare for exams. Ironically, these entrepreneurial, private tutors can earn millions and have full autonomy in curriculum and instruction.

Public reporting of students’ scores for examinations and potential ridicule for failures create a high-pressure environment in which students focus on test preparation with tutors rather than on the learning environment in school” (Bledsoe). She then moves on to look at Poland’s newfound success in their educational system. They, too, are a country that has gained achievement with educational reform. Just like Texas, Poland focuses more on accountability and puts less emphasis on standardized testing, which creates a lot of stress for not only the students, but also the teachers. On the other hand, Partanen and Sahlberg agree that equality and cooperation play an important role in the success of the Finnish education system. Reading both of these articles has given me much insight to different ways of thinking. Christie Bledsoe did a great job of comparing our educational system with Finland’s and Anu Partanen was very detailed on many different topics relating to educational reform. I definitely think more Americans should start thinking about changing the way our system works here. 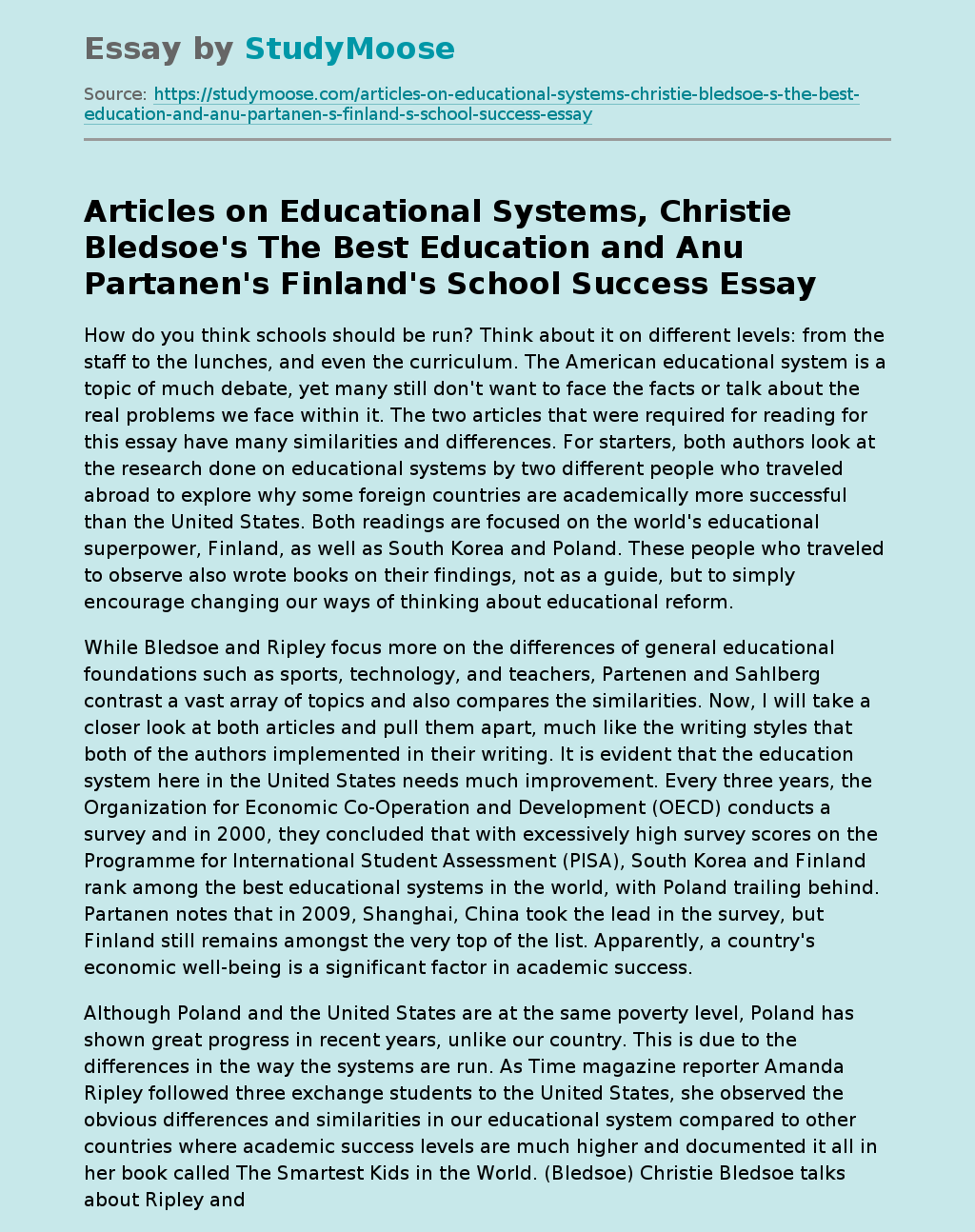