Christians believe God created the whole world because he had the powers, this make them argue out the theory of evolution which states that each and every creature that exist has undergone the process of evolution. Due to the believe in the theory of creation, religion has given trust to their creator who is god, from the ancestral time to modern time. Many societies have followed this because their ancestors had practiced this for a very long time.

Christians believe in faith and they argue that their faith is difficult to destroy since they believe in the word of god which was prophesized and written in the bible by men who were inspired by god and this believes have forced non- believers in the society into Christianity.

Don't use plagiarized sources.
Get Your Custom Essay on Article with logical fallacies Just from $13,9/Page

The study of the bible has also strengthen the Christian believe since it has given them reliable evidence that their powerful god exist and one day he shall come into existence and he will save them from the temptation they encounter each and every day .

Figure out what kind of logical fallacy is used and how it is used. Logical fallacies are the detects that weakens our arguments or reasoning, It can also be defined as error in reasoning. By having the strength to look at different types of fallacies we are able to evaluate the arguments, readings etc Fallacies have also helped us to improve our critical way of looking at things.

The following logical fallacies have been identified in the above article; Fallacies that appeals to galley or Argumentum ad populum this is a fallacy that make people accept something because it is done or accepted by many people, an example in the above article is where people in the society decide to follow Christianity because they found other people had already accepted to follow it.

Argumentum ad atiquitatem or fallacy of accepting something since it has been there for along time, example is the above article is where people in the society have accepted to be converted to Christianity since they believe it has been their for along time, therefore it is good to be followed. Argumentum ad baculum or Fallacy that appeal to force in order to prevail in debate, this particular type of fallacy is seen widely in the religion whereby a powerful religion forces non- believers to accept believe in the religion .

In the above article non believers are forced to believe that god exists and they should believe in him. Lastly there is the Fallacy where conclusion is drawn from unconnected premises. For example in the above article bible has been believed to have been written by god`s people who were inspired by god, So when people read the bible and learn that it was prophesized by god, they are unable to evaluate it into creative thinking. 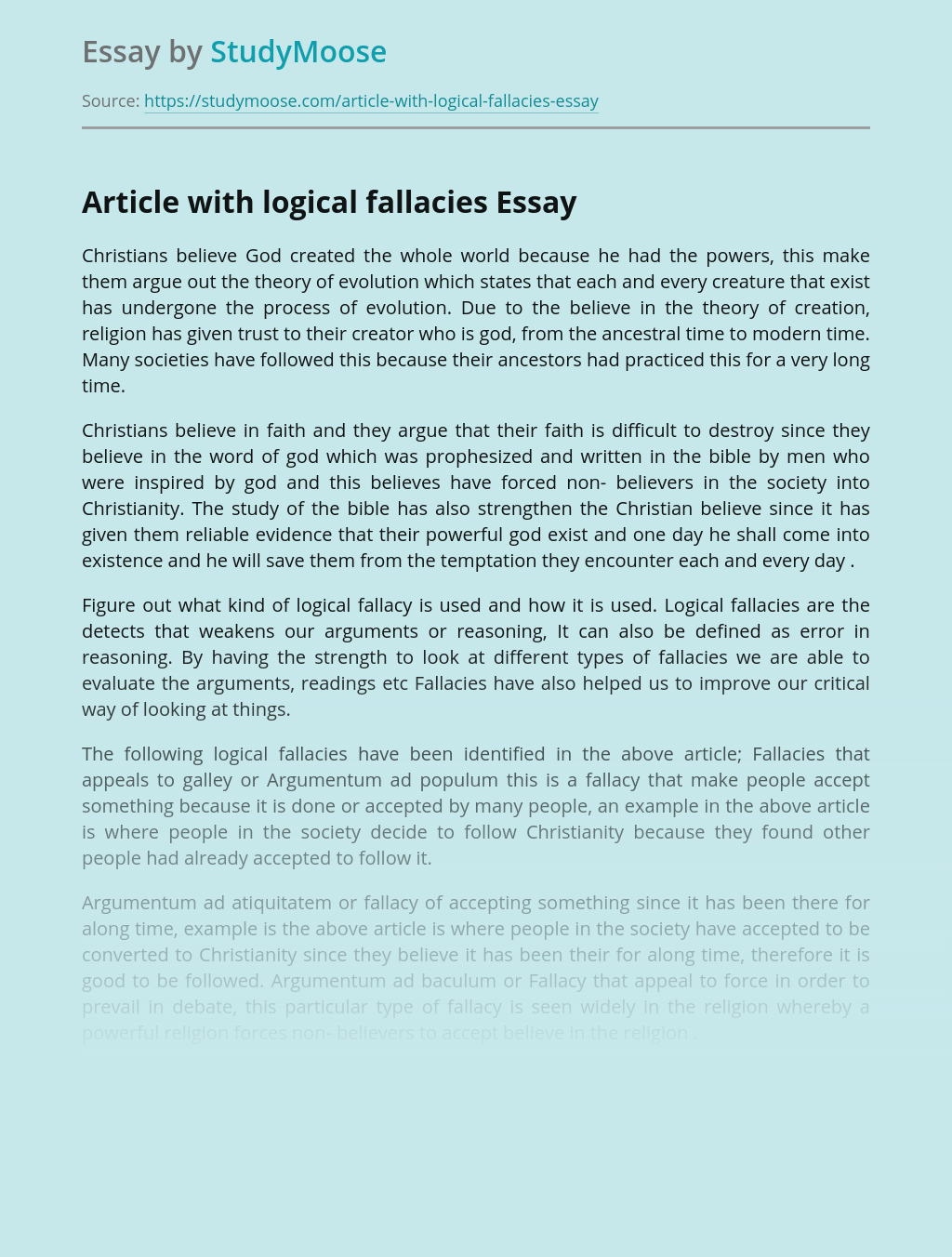 “Art for Heart’s Sake” is a short story written by Reuben Lucius “Rube” Goldberg, an American cartoonist, sculptor, author, engineer, and inventor, who lived between 1883 and 1970. He is best known as a cartoonist and a founding member of America’s National Cartoonists Society. Collins P. Ellsworth is a wealthy 76-year-old businessman who is being treated for a form of compulsive buying disorder, otherwise known as oniomania. His uncontrollable buying habits—he...

Get Essay
Athens VS Sparta

Athens and Sparta were two of the greatest Greek city states ever. Not only do these two cities have many differences but they also have some things in common too. But only one could be the best, was it Sparta or Athens? Many people think that Sparta and Athens were completely different, but this is...

﻿Analysis of Bartleby, the scrivener

The narrator’s initial self-characterization is important to the story. He is a “safe” man, one who takes few risks and tries above all to conform. The most pragmatic concerns of financial security and ease of life are his priorities. He has made himself perfectly at home in the modern economy: he works as a lawyer...