The Profession of Arms Campaign is mandated by John M. McHugh, secretary of the Army, and Gen. Martin E. Dempsey, Army chief of staff, to assess the state of the Army and take a critical look at how the past decade of war has impacted the military and civilian workforce.

“The overall objective of the campaign is for Soldiers and leaders to refine their understanding of what it means to be professionals — expert members of the Profession of Arms – after over nine years of war and to recommit to a culture of service and the responsibilities and behaviors of our profession as articulated in the Army ethic,” Dempsey said.

Another Army leader talked about what the campaign means for all those serving in the Army, whether Soldier or civilian, and how it is designed to help transition from the past decade of continuous conflict into a still-uncertain future.

“The Army has decided to introduce the campaign for the Profession of Arms to develop leaders of character and competence required to meet the dynamic challenges of the 21st century,” said Lt.

Gen. Robert L. Caslen, U.S. Army Combined Arms Center and Fort Leavenworth, Kan., commanding general. “This campaign is designed to define and reinvigorate what it means to be a professional in the Profession of Arms.

As we embark on this mission, we must reflect on the values and traits that define and distinguish us as a unique profession.”

Lt. Gen. Richard P. Formica, U.S. Army Space and Missile Defense Command/Army Forces Strategic Command commanding general, has initiated a command-wide review of what it means to be in the Profession of Arms.

This review is part of a broader Army wide effort and leaders across the command are getting involved in this open collaborative process to solicit and capture feedback from its Soldiers and civilians. This campaign will also be a teaching opportunity to help better understand what it means to be in this profession and what it means to be in public service that distinguishes a profession from a career.

For the workforce at USASMDC/ARSTRAT, the Profession of Arms Campaign is a chance to give input to the Army on how the past decade has influenced, both good and bad, those serving their nation in wartime.

“For the Army as a whole, this is a chance to assess a lot of what impact the last 10 years of being at war has had on our workforce. It is a chance to take note of what we need to do right now, what we need to do in the future and what direction we need to go in, and I think this could have a great effect on SMDC as a whole,” said Lisa Ratley, Concepts Division, Future Warfare Center-Battle Lab. “We will conduct some roundtable groups and town hall-type meetings with civilians, officers and noncommissioned officers that will take input from everyone.

“This is a great opportunity for SMDC to gather input and have something to say to the Army as a whole,” she added.

In the Profession of Arms Campaign, there are five ‘cohorts’ that the Army is looking at. They are officers, noncommissioned officers, warrant officers, junior enlisted Soldiers and civilians.

The campaign focuses on three questions:

“The Army chief of staff and secretary of the Army are concerned about what effect the last 10 years of war is having on the Army,” said Donald Long, FWC-BL. “They want to assess the impact of it and to keep ahead of what has actually changed, and how do we implement fixes to any problems or issues that may come up so we can continue to be a professional Army.

The Army has also sent out 20,000 surveys to civilians across the Army to get an input from the workforce.

“To me, working for the Army is not just a job, it is an understanding that we are here to serve the American people,” said Ginny Partan, FWC-BL. “I think the Profession of Arms Campaign is going to help us bridge the gap between 10 years at war and where we need to head in the future. It is going to help us take a hard look at ourselves, across the spectrum from Soldiers to civilians, to see what we are doing right and where we can improve so that we are better in the future.” 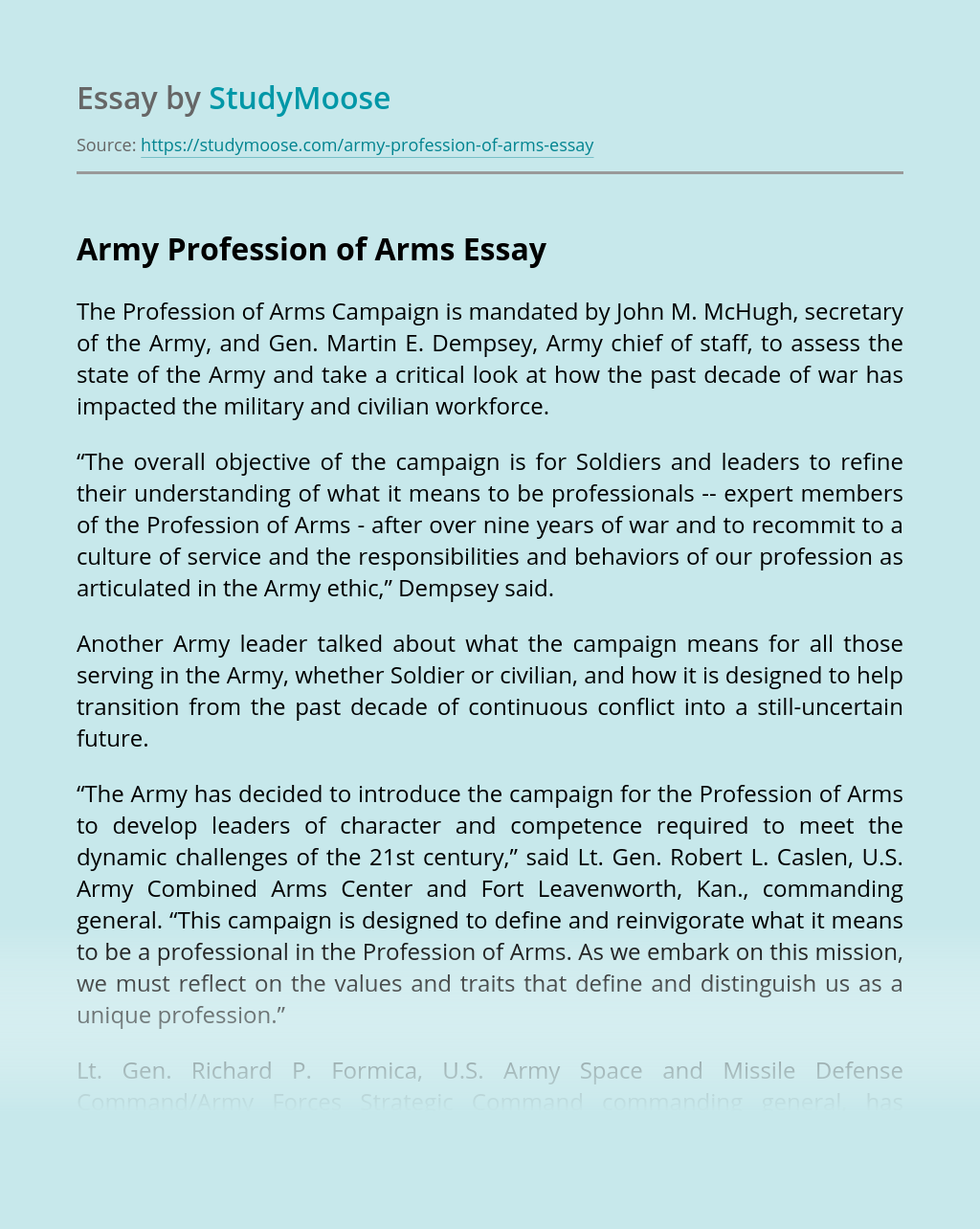 Don’t waste time
Get a verified expert to help you with Army Profession of Arms
Hire verified expert
$35.80 for a 2-page paper
Stay Safe, Stay Original