Argumentative Essay On Catherine And Rodolfo

However the uneasiness started before Catherine and Rodolfo even began to date; Eddie’s dislike for Rodolfo becomes apparent when Rodolfo begins to sing, Eddie rises and moves upstage partly because Catherine seems to enjoy it, he doesn’t like anyone taking Catherine’s attention away from him, when he has raised her from a child, he doesn’t want to be sidelined and forgotten. In addition the lyrics state how difficult it is to “love a doll that is not your own” which is directly relevant to the situation concerning Catherine and Eddie.

Don't use plagiarized sources. Get your custom essay on
“ Argumentative Essay On Catherine And Rodolfo ”
Get custom paper
NEW! smart matching with writer

Eddie again feels uncomfortable which such a feminine man and he sees the singing as a sign of Rodolfo being “not right” (homosexual). In these times fathers would always be protective of their daughters, they wouldn’t have the freedom that girls have now. Therefore the audience would empathise with Eddie trying to hang on to his daughter. However it shocks the audience when his parental love is revealed as perhaps, something more sinister, this adds to their pity for him and keeps the audience gripped and guessing what he’ll do next.

Eddie’s growing dislike of Rodolfo becomes evident when he takes Catherine to the “Paramount”, Eddie lightly insults Rodolfo saying that he has “wacky hair”, that he gives him the “Heebie Jeebies” and he even refers to him as being “like a chorus girl”. Eddie clearly feels embarrassed by Rodolfo’s apparent lack of masculinity he even makes reference to his lack of strength to Alferi when he states that if he “[closes] the paper fast it could blow him over”.

Rodolfo is seen as a joker among many of his co-workers; they refer to his character as, “humorous” yet although Eddie clearly doesn’t like Rodolfo he still sticks up for him by saying; “he’s got a sense of humour”. This small section of the play shows just how highly Eddie regards family values, which makes the audience disbelieve Alferi when he suggests that he “could have finished the story” after Eddie confided in him. This all adds to the tension of the play and makes the ending more intense and surprising.

At the end of Act 1 tension is building within the family and we all know that this will all come to a climax and this scene is the calm before the storm; it is the build up that prepares us for the kissing scene which occurs at the beginning of Act 2. At the time, all of the Eddie’s feelings are being expressed to Catherine, Alferi or Beatrice and this is all happening “behind closed doors”. However, in this scene Eddie’s feelings towards Rodolfo become apparent to Marco. It begins with Eddie talking about respect, directing most of this at Rodolfo after he said that America is

more “free”. Eddie sees this as an opportunity to character assassinate Rodolfo and belittle him in front of everyone. He begins to say how in Italy you wouldn’t just “drag off some girl without permission”, Rodolfo senses the bitterness in Eddie’s tone and immediately starts to argue how he does have “respect for her”, yet at this point Marco is quick to tell Rodolfo to “come home early” which shows how they respect Eddie and don’t quite understand the true root of Eddie’s uneasiness. Yet Eddie is not

content with embarrassing Rodolfo in front of Catherine to that extent, he then tries to push it further by stating that the dock is “no place for him”. However when he realises that Rodolfo and Catherine stop dancing to listen to what he has to say he realises that he has gone too far and back tracks by starting to say how Rodolfo’s skills such as dress making, cooking and singing are an asset to him. Yet he still senses the tension so changes the subject to boxing and uses it as an opportunity to demonstrate his superior strength over Rodolfo by proposing to teach him.

As a result of this conversation they begin to spar with a few gentle punches, then after some encouragement Rodolfo starts to throw some slightly harder punches, then Rodolfo grazes his jaw, Eddie then punches back which causes Rodolfo to [stagger]. This is the moment where Eddie’s underlying dislike for Rodolfo becomes apparent to Marco. Marco then decides to play Eddie at his own game; Marco then challenges Eddie to lift a chair from the bottom of the leg, Eddie fails the first time but tries again and again fails to lift the chair.

Marco uses this as an opportunity to belittle Eddie the way he did it to Rodolfo. So Marco also attempts to lift the chair and lifts it on his first attempt, he then raises the chair over Eddie’s head, and conveys a glare of warning which Eddie absorbs, this was an attempt of Marco to intimidate Eddie using a test of strength, and the glare of warning is Marco informally telling Eddie to leave his little brother alone and pick on someone his own size. This scene is the catalyst that aggravates Eddie further and Eddie sees this as an insult to his honour.

This leads to an explosion of anger in the “kissing scene” at the beginning of Act 2 which is a crescendo that has been building up ever since the “sub-marines” arrived, which we know from Alferi’s monologue will lead to some form of confrontation and ultimately to Marco’s deportation and Eddie’s death . In “the kissing scene” the ulterior motives and hidden intentions of the leading characters become apparent. The character assassination no longer happens in secret, “behind closed doors”, in this explosive scene Eddie’s true feelings towards Rodolfo are shown and all it takes for this to happen is a “case of scotch whisky”.

The scene begins with Eddie entering the house to see Catherine and Rodolfo in the bedroom doorway, at this sight Eddie’s arm jerks slightly in shock, which shows his discomfort which then leads to Eddie exploding with anger and ordering Rodolfo to “pack it up” and to “get out”. This provokes Catherine, although trembling with fright to make the difficult decision to leave him. As a result of this Eddie is consumed with rage as he has a deep love for her. Eddie’s pride also comes into the equation; he simply cannot face the fact that a man has come into his house and taken his “daughter”, and to add insult to injury she actually wants to go.

Argumentative Essay On Catherine And Rodolfo. (2020, Jun 01). Retrieved from https://studymoose.com/argumentative-essay-on-catherine-and-rodolfo-new-essay 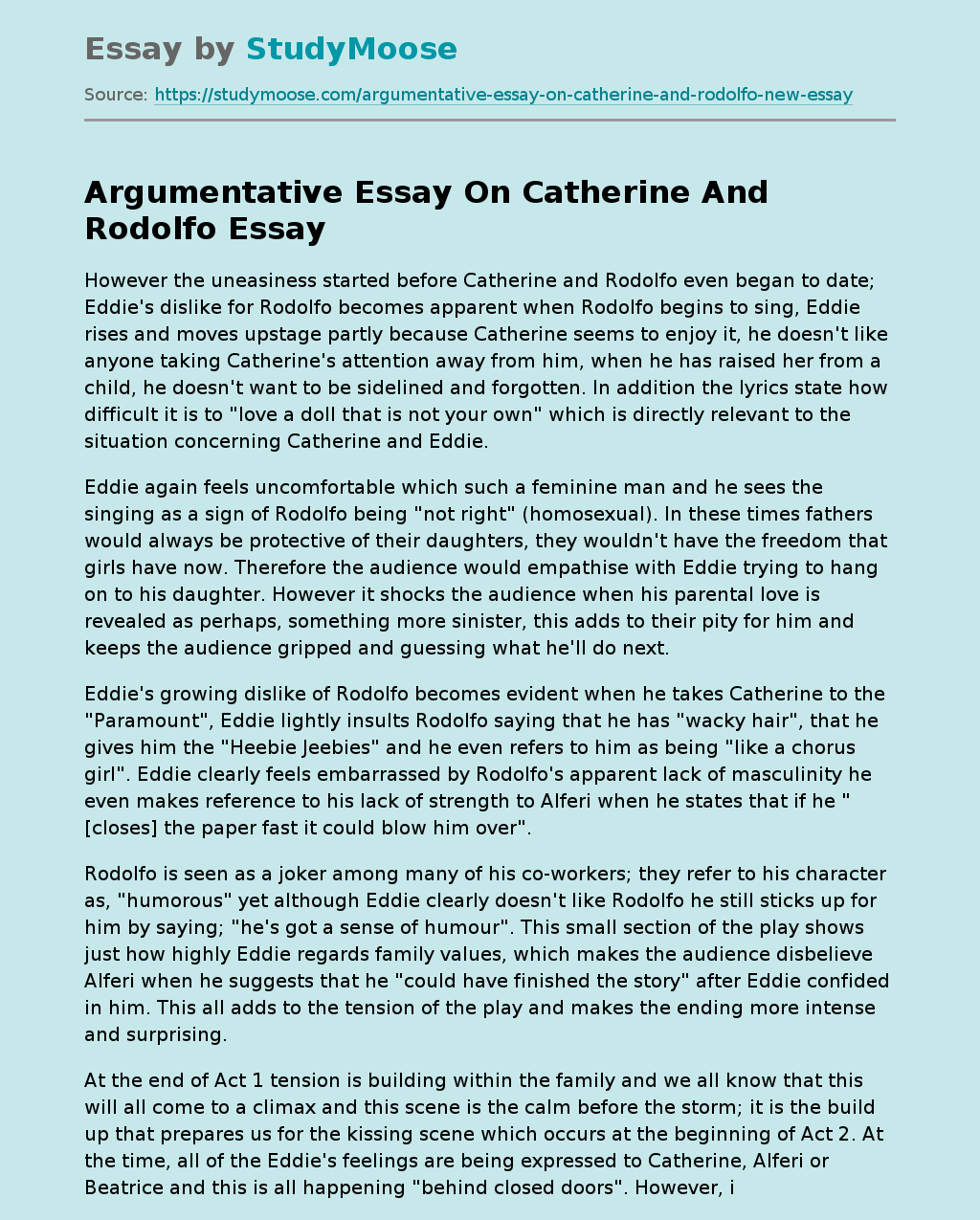