Introduction
Euthanasia is the practice of deliberately killing a person to spare him or her from having to deal with more pain and suffering. This is always a controversial issue because of the moral and ethical components that are involved. This paper will discuss the arguments against euthanasia.

Discussion
Euthanasia is clearly against the Hippocratic Oath that all doctors have to fulfil. This oath basically states that doctors must never be involved in the killing of people because after all, they have been trained to ensure that people are able to recover from their diseases and injuries.

Don't use plagiarized sources.
Get Your Custom Essay on Argumentative Essay Against Euthanasia Just from $13,9/Page

Doctors are the ones whom people entrust their lives whenever there is something wrong with their health. Thus, it is the responsibility of the doctors to always do the best they can to help people live and enjoy their lives (Cavan 48). If their patients die under their supervision, the doctors can accept this for as long as they know and can prove that they really did their best and exhausted all possibilities to ensure the survival of the patients.

There are just certain instances where the disease or the injury of the patients has become so serious that it is already difficult to treat and make the patients recover. In these cases, it is unfair to blame the doctors for the death of the patients. The Hippocratic Oath helps the doctors to realize how important their responsibilities are to the people in terms of their health. This oath also provides an assurance to the people that they can trust their doctors and be assured that they will do whatever is necessary to help them deal with their health problems. If euthanasia becomes legalized, then the effectiveness of the Hippocratic Oath will be negated and the doctors can have the option of immediately resorting to euthanasia especially in difficult cases instead of trying their best until the very end.

Another argument against euthanasia is that it is essentially homicide
because the doctors will kill the patient even if it has been approved by the patient himself or the family of the patient. Euthanasia is not that different from murder because they both involve killing a person. The only difference is that in euthanasia, there is mercy and consent involved while in murder there is none (Tulloch 82). If murder is prohibited by law because people take matters into their own hands and kill others, then euthanasia should also be banned because doctors take matters into their own hands and kill their patients even if there is consent from the patients and their families or relatives.

Lastly, the continued improvements and innovations in the field of medicine and health care make euthanasia illogical to be implemented as an option. The reason why medical experts continue to work hard to come up with improved medical technologies, medicines and treatment methods is that they want to make sure that the sick people are able to recover faster and healthy people become even healthier. All of these efforts are being done to make the society become more productive due to the presence of healthy and strong people (McDougall 26). Thus, doctors will not have an excuse for not doing their best for their patients as they already have access to the best medical technologies, medicines and treatment methods that will prevent them from having to resort to euthanasia as the only option.

Conclusion
There is no doubt that euthanasia needs to be banned as based on the three arguments discussed above, it does not deserve a place in human society. Doctors must never give up on their patients no matter how hopeless the situation might be. They must exhaust all options to give their patients a fighting chance to survive and 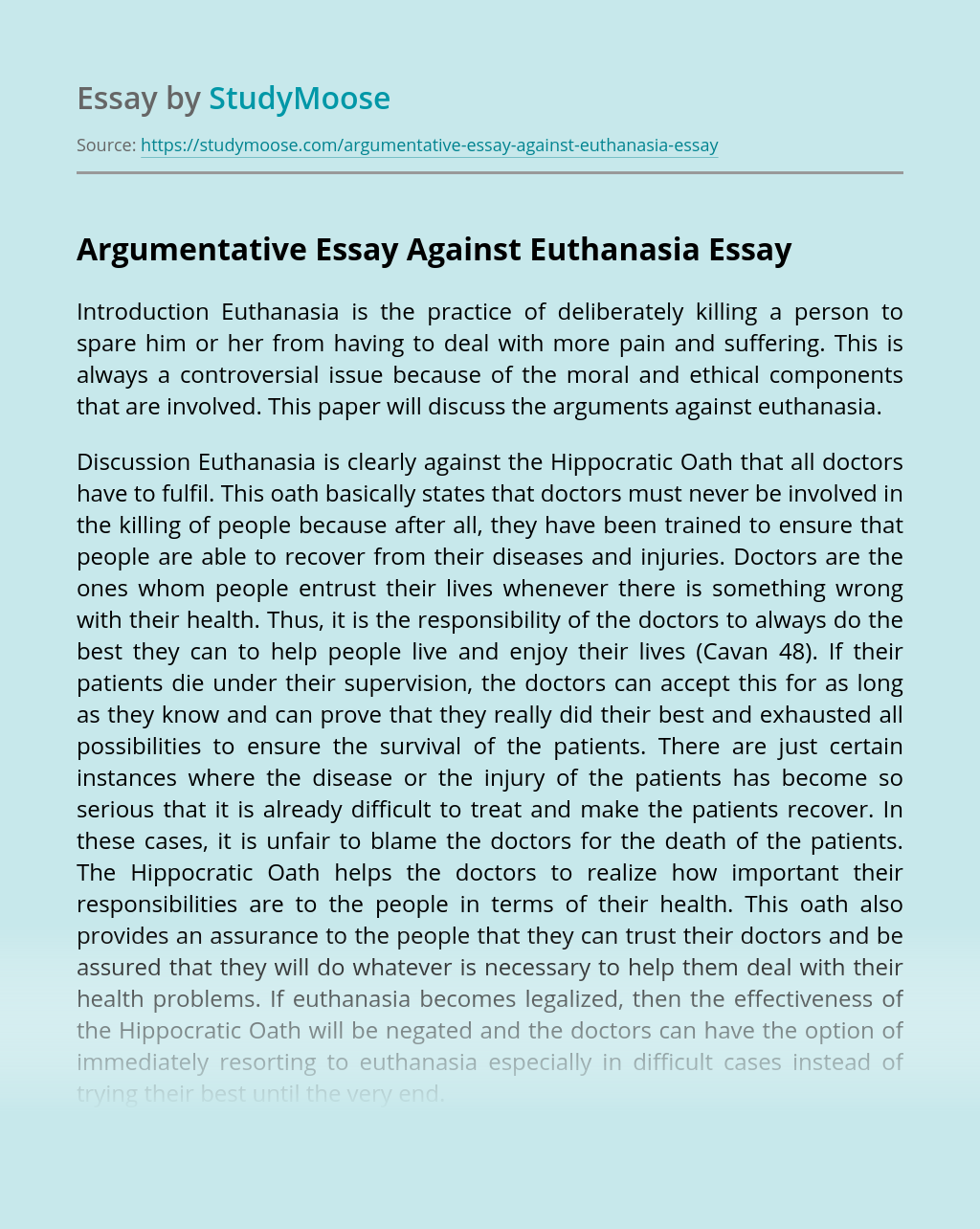 Adulteration of food with toxic chemicals harmful to health has reached an epidemic proportion in Bangladesh. The newspapers have dubbed it as the ‘silent killer’. It is very difficult to find a sector of food industry which is free of adulteration. From raw vegetable and fruits to milk and milk products to fish, meat and...

Introduction Although theoretical preparation clearly is important, there is no substitute for the learning that takes place during clinical experiences. Clinical experience is acknowledged as being the core of nursing education. As nursing student without previews experience in mental health, I was reflecting the same attitude held by general public that mentally ill patient are...

Toddlers may come to know that being sick means feeling bad or having to stay in bed, but they have little, if any, understanding of the meaning of health. They depend on their parents for health management. A normal assessment finding for the toddler is being current on their immunizations. Because their immune system is...

Centuries before to cure the common diseases mostly people were used to the natural ingredients. The use of natural resources can be thought a way of glorifying the information about the lifestyle of past people. Natural health remedies have very powerful and healthy effects. The at-home pharmacist There are so many ways of self treatment...

View sample
Level 5 Diploma in Leadership for Health and Social

Review the range of groups and individuals whose communication needs must be addressed in own job role. In my role as Team Leader with Deputising Responsibilities, I have a wide variety of people and organizations with whom I must communicate. On a day to day basis I must meet the communication needs of the...