One drizzling day, Aling Saling bought half a kilo of rice. It was put in a brown paper bag which the 40-year-old housewife held at the bottom, all 10 fingers at full stretch. But one side of the bag ruptured, too weak to hold even its meagre content. Aling Saling coddled her torn paper bag like a baby to keep what was left of her precious rice from spilling onto the wet pavement. She was torn: should she kneel and pick up her rice one grain at a time or take refuge from the rain and protect what was left?

She walked on, her shoulders hunched over her bag.

Her experience captured the essence of the continuing debate about the plastic ban, which has resulted in the shift to the use of paper bags. Our world today is experiencing an environmental dilemma particularly on the numerous solid wastes around us. This is what pushed the government to implement an ordinance that would ban plastic bags and use paper bags instead.

Proficient in: Banning Of Plastic Bags

But did the government thought of the possible environmental effects that this alternative might bring?

Are they positively aware that using paper bags as a replacement for plastic bags could be of much help to mankind and to our environment? The use of plastic bags had been banned for the reason that it clogs sewers and drainage canals that lead to floods and other environmental damage. But, what people do not know is that it comes with a lot of benefits. First, plastic bags are cheap, reusable and can be recycled even when wet and can hold heavy weights compared to paper bags.

Second, they use less energy when it comes to their production and it generates less atmospheric pollution when produced and transported and third, it is more weather friendly compared to paper bags and for it to be made, trees do not need to be cut. These are the main benefits of using plastic bags not only to the environment but also to mankind. Noli Jimenez on his article “Biodegradable Plastic Bags”, believed that plastic bags are a wonder of modern technology because it can be made very hin with minimal raw material and are still strong enough to carry a heavy load of shopping. He also said that no other carry-all container can hold 2,500 times its own weight and stay strong even when wet. Even though a lot of people consider paper as a more eco-friendly option than plastic, some of them do not know that the creation of a plastic bag requires 40% less energy than that of a paper bag. In addition, paper bag production requires 50% more water pollution and 70% more air pollution than plastic bag production.

Furthermore, to make one ton of paper, 17 trees need to be cut and none for plastic; furthermore, a gallon of potable water from public supply is used per paper bag while only one gallon of water is used to make an estimated of 116 to 125 plastic bags. Paper bags do not have handles making it more difficult to carry and are less preferred for reuse because they cannot hold heavy loads and is unrecoverable when wet. Plastic bags, on the other hand have handles that makes it more convenient to reuse and can still be used even when wet, making it more useful and handy.

Carlito Soon, PPIA director and board member of the Packaging Institute of the Philippines, said that a total ban on plastic bags would not solve the problem and will only result to 600,000 employees losing their jobs. On the aforementioned complications on the use of paper bags, it also has its advantages. For instance, it is biodegradable and decomposes easily than plastic bags. It does not clog sewers and is not visible in landfill or waterways.

When one ton of paper bags is reused or recycled, three cubic meters of landfill space is saved and 13-17 trees are spared. On top of that, paper bags do not emit many harmful effects on the environment and to man. Banning plastic bags is not the best solution after all for it can be of great help to our environment and to mankind. We cannot just ignore its benefits and considering the fact that it is eco-friendly in its own ways; therefore, I say that plastic bags should be managed and people should know how to dispose them properly instead of banning it.

Plastic bags can be defined as the most damaging form of environmental pollution. They can have a damaging effect on marine animals and wildlife in addition to the aesthetic effects on beaches, parks, and trees. Plastic bags are potentially one of the main causes of death to marine animals (Harbor keepers,2008). Up to one hundred thousand marine animals or more die each year from eating plastic bags which are mistaken for food. This can result in blocking the animal’s intestines and possibly lead to the animal’s death.

Another possible situation is that wildlife, such as birds, can get tangled in plastic bags causing choking and immobility, which may eventually lead to death. (Senior, 2008) and (Citizen Campaign, 2010). In other situations, after plastic bags photo degrade they remain toxic and could be eaten by fish, shellfish or any other marine life and survive this allows the toxins to enter our food chain through bioaccumulation (Puget Soundkeeper Alliance, 2011). As a solution to these types of problems is taking action by educating and increasing the public’s awareness to the harmful affects that a plastic bag impose on our environment.

Applying this would mean to get consumers involved in reducing the number of plastic bags they consume and instead of getting new bags they can simply reuse their old bags (Sea Turtles Conservancy,2011). Another important solution would be using bio degradable bags instead; these types of bags take up a shorter time to degrade and become environmentally safe to both humans and animals. These types of bags are made from natural materials therefore; they are digested if animals swallow them (Biodegradable Plastic Bags,2011). The harmful effects of plastic bags extend to affect human health and social lives.

According to the US CPSC (Consumer Product Safety Commission, 2011) suffocation has been a significant of death among children under the age of one. According to a report presented in 2007 by Clean up Australia, when plastic bags are thrown in the streets they may block the drains and result in flooding during heavy rain. Stagnant water in blocked drains may create a breeding ground for many forms of insects like mosquitoes, which can transmit dangerous diseases such as malaria, dengue fever, and encephalitis (World Health Organisation, 2011).

Reducing, reusing and recycling, in that order, could be the most viable option to decrease the social and health impact of plastic bags. Reducing the number of plastic bags can be applied by imposing a fee such as PlasTax. In 2002 PlasTax was issued in The Republic of Ireland, which is a fee on plastic bags. This new tax resulted in a ninety four percent drop in plastic bag consumption in one year (Convery F, McDonnell S, Ferreira S, 2007). The next step is to reuse, instead of disposing of plastic bags consumers should be encouraged to keep reusing their bags.

The final step is to recycle the plastic bags, many supermarkets such as Tesco and Sainsbury’s give the consumers the option to bring in their old bags for recycling. In conclusion, usages of plastic bags are very limited unlike their infinite damages. They are harmful to health, the environment and wildlife. The solutions to put an end to the problems associated with plastic bags are available, cooperation between governments, shops and individuals is vital to take the necessary actions by reducing, reusing and recycling plastic bags. 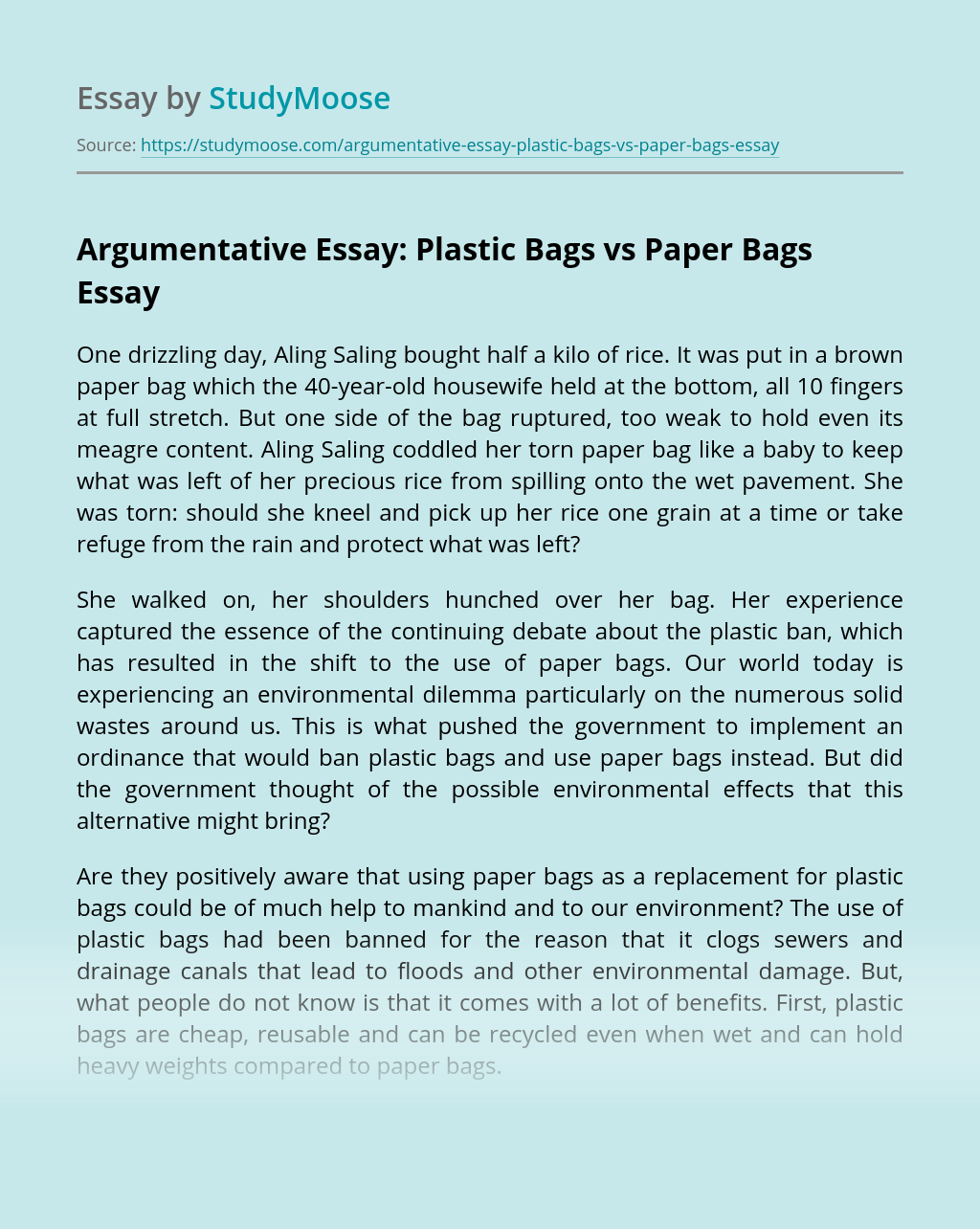