Are young people feel to being too protected

Parents often believe that it is better to be safe than sorry. Do you consider young people to be too protected?

Whenever you come across the word “childhood”, you can sense the freedom to do everything, you can see yourself on all smiles and even you can remember the silly things you have done with your friends when you were young which could make induce a sense of humour till now. Well not anymore. In today’s world, parents prevent them from letting them go out and venture, they do not allow their children to do activities and lastly solving their children’s own problem.

Don't use plagiarized sources. Get your custom essay on
“ Are young people feel to being too protected ”
Get custom paper
NEW! smart matching with writer

The results tells us that crime rate has decreased by a whopping 86.81%. On the contrary, some critics may argue that children are immature, thus they are unprepared to face the world. But this is part of life, learning should never be obstructed and the more experienced they are, the more matured they will be. Ernest Dimnet once said that, “Children have to be educated, but they have also to be left to educate themselves.”. Therefore, this brings to me to my point that parents are overprotective.

In today’s world, it is a common sight to see helicopter parents preventing their child to do activities such as cycling, skating or even walking to school. They are chained to their home making children prisoners in their own homes. This is because they are afraid that their child may contract something “disastrous” such as fever, minor injuries. Research conducted by Cambridge University tells us that children ten years ago have 65% lesser children suffering from obesity than children now. This is due to parents not allowing their child exercise.

If this continued, children will get obese and may get long term medical conditions such as High blood pressure. On the other hand, parents may argue by not allowing their children, they can prevent their children from being kidnapped by con man. This is the same worry once Lenore Skenazy, author of free range kids and America’s Worst Mom, had this same problem when she let her 9 year old to take the subway. But soon it has paid off when her son returned home all smiles. Therefore, this tells that children are overprotected.

Lastly, a research done by National University of Singapore tells us that a whopping 78.69% of children, between the age of 10 to 15, who participated in the research lacks basic problem solving skills and a majority of children are brought up by helicopter parents. Nowadays, children share their problems to their parents, soon their parents will be worried and they will handle their problems. Because of that, children lack problem solving skills and become more reliant to their parents. On the other side of the coin, some critics may argue that children can pick up problem solving skills by attending courses or go for counselling. But which children will be interested to attend courses or go for counselling, and also a famous author, Paulo Coelho, once said that “People never learn anything by being told, they have to find out for themselves.”. Thus, this can tell us that young people are overprotected.

To oppose this point, some critics may argue that children are naive and gullible. They make decisions without analysing the aftermath of it. Afraid of that, parents prevent their children from making decisions. To illustrate this point, here is an scenario. Imagine your 15 year old daughter was proposed by a guy. Being in a dilemma whether to accept or not, she follows her intuition and accepts his proposal. So without you knowing she has been hanging out with her “life partner”. Then one day, she comes at your doorsteps, crying and limping at the same time. Then she tells you what had happened. Then you came to know that she got raped by the guy she had proposed without you knowing. There goes her virginity. There goes your pride. There goes your faith. There goes your daughter’s future.

You cannot rewind back into time to stop this. And there you are now feeling that you were a useless parent to your daughter. Back to my point, to prevent this types of problem, parents should effective communication with their children and when they have done something wrong, you should advise them on what they should do to prevent the situation to happen again, rather than yelling and abusing them which would not bring any solution to the problem but making the problem even worse. In this way, we could prevent being an overprotective parent and establish a bond something more than a Parent-Child relationship.

Before I end off my essay, let me tell you my opinion about this topic. Parents do show more care and compassion to their children than anyone could do. Due to that, parents tends to become over protective and they aim to let their child have a stress-free life. But the problem is that with the aim of theirs, their children are being over protected. Thus, their children becomes immature, becoming less confident to solve their own problems and lastly becoming less experienced. Thus, I can firmly conclude that young people are being overprotected!

Are young people feel to being too protected. (2016, Mar 13). Retrieved from https://studymoose.com/are-young-people-feel-to-being-too-protected-essay 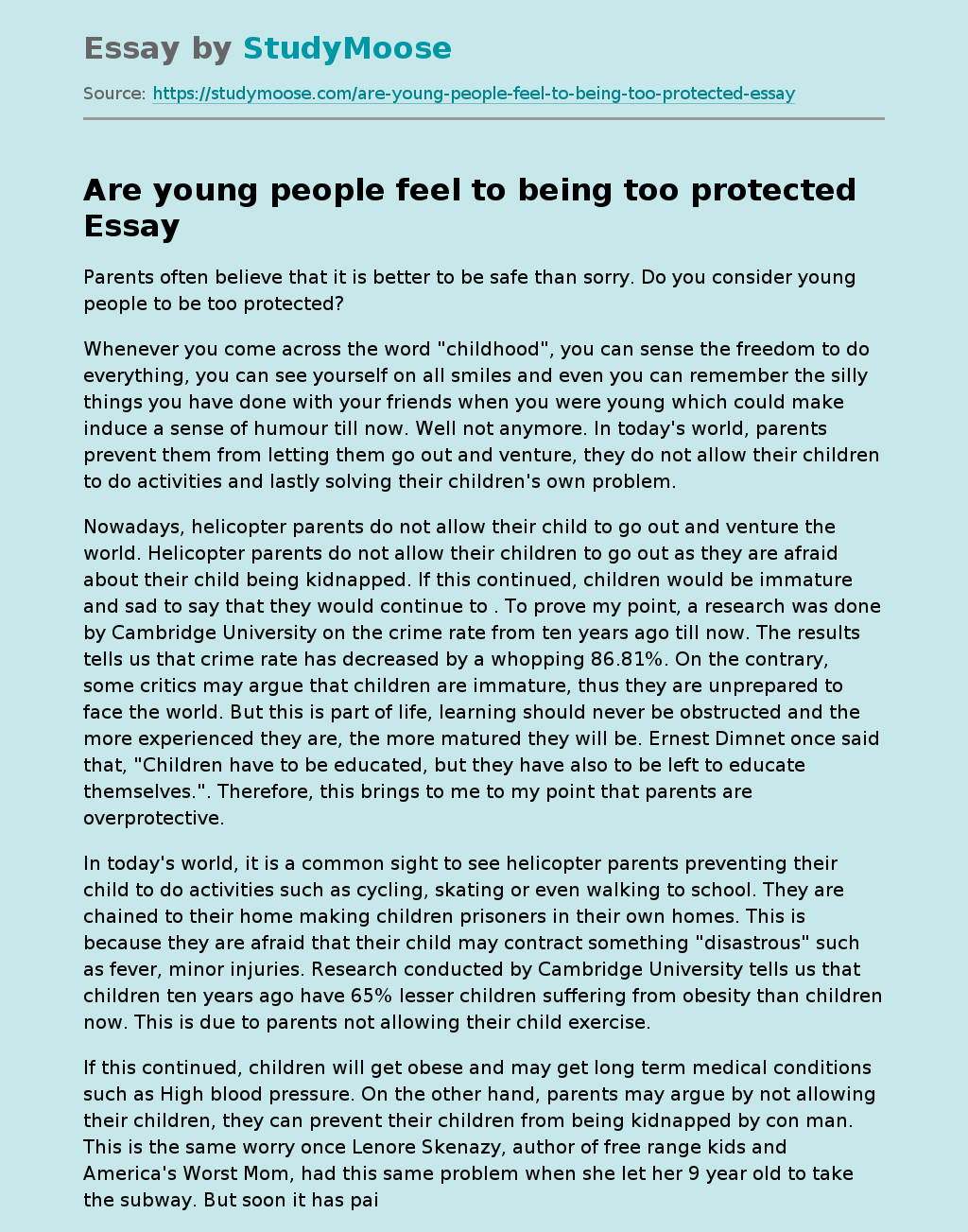