The novel Arc de Triomphe was published in 1945 in the USA. In it, Remark turned to the problem of humanity, which was relevant for Europe and the world at the time. It is manifested, or, on the contrary, disappearing in people against the backdrop of growing Nazi ideas in Germany, Italy, Austria and other countries, slowly falling under the gloomy power of fascism.

Place of action of the novel is Paris, France. It is presented by the author as the last bulwark of a peaceful life, in which both ordinary refugees and Jews murdered in German Gestapo can coexist relatively calmly.

All of them live illegally in Parisian hotels. The hosts of the hotels sympathize with the defenseless, innocent people, have high patrons in government or police circles and use it both to earn stable profits and manifest their natural kindness. It is an excellent example of compassion in times when everyone is exposed to danger.

The main character is a German refugee.

In his past life, he was one of the leading surgeons in the country, but now he should use the fictitious name of Ravik and hide from the authorities. He represents a typical example of a great person. His problems with the German authorities begin with the shelter of two people wanted by the Gestapo. They were not his friends or relatives, but ordinary people, whom he knew and did not understand why they had to go to torture and death. Disobedience to fascist laws led Ravik to the Gestapo prison.

There he experienced severe cruelties, the death of his beloved girl Sibylla and deportation to a concentration camp. Escape from the latter became a step in a new life might be more successful for him. He was illegal in Paris, but he could still feel calm and free. For five years, he illegally conducted complex operations instead of not too skilled French doctors and received for this a minimal fee. Arc de Triomphe shows us the last year from the peaceful, Parisian life of the doctor, which began with an acquaintance with the Italian singer and actress Joan Madou and ended with the death of a beloved woman, the invasion of the German troops in Poland and the declaration of war.

The love story of Ravik and Joan passes under the sign of boundless absorption by each other. The doctor resists feelings, but when he becomes quite sure that he has no special choice, he decides to give himself up to their will. He realizes that sooner or later his relationship with Joan will end. They were completely two different people, and therefore their love was doomed even at the moment of acquaintance.

The end of the relationship between the protagonists and his lover is long and painful. Despite the decision not to share the beloved woman with another man, the doctor cannot either refuse her closeness, nor her love, that forces him to flee to help Joan at any time of the day or night. He realizes the power of his love for her only before the face of death. She was something much more than just love. Joan became the whole life to him.

Just as love resurrected Ravik, hatred helped him overcome the painful memory of the past. The murder of the Gestapo member Haake, who tortured the doctor and became the culprit of Sibylla’s suicide, is perceived by the protagonist as something natural. Ravik destroys not the man, but the beast. He does not take one life but gives it to dozens, if not to hundreds, of innocent people whose existence is threatened because of such people as Haake. Ravik’s friend – Boris Morozov helps him track down and develop a murder plan. Ravik kills Haake shortly before the declaration of war. The historical situation serves as an additional justification for the action of the main character.

Rain is the symbol of life in the novel. The rain pours during the nights spent by Ravik with Joan, and he realizes that love has revived him to life. Another symbolic image of the Arc de Triomphe is the night. It plays an important role and is connected with two boundary constants: love (acquaintance and meetings of the protagonists take place during the dark time of the day) and war (Ravik kills Haake before the dawn, after the invasion of German troops in Poland).

This is one of the most powerful novels I’ve read. And I’m not ashamed that almost every chapter made me wipe the tears away. 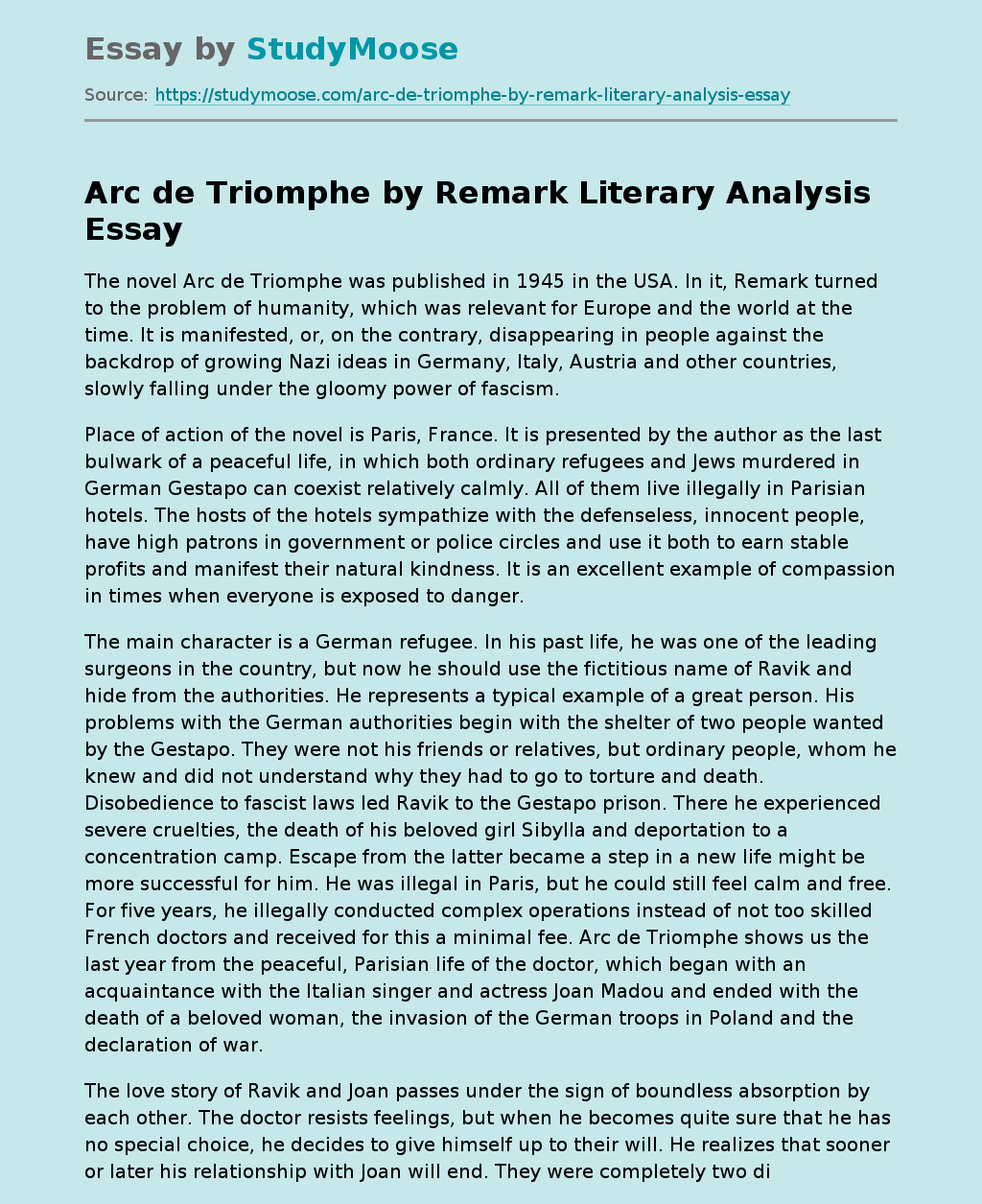