Our great nation has come to a crossroads, fellow citizens. Our destinies shall lay in the grasp of our hands, and I call upon thee to make the right decision. The righteous path, upon which this country was built – must be the only path which we take, for the sake of our children, and for our country. For the path of life, liberty and the pursuit of happiness cannot be reached with the existence of slavery. How can a man be truly free, when his fellow man suffers at the hands of another? How dare we call ourselves free men and free women – when tyranny lurks around the corner? The tyrant and the master are in league together – in this country – and it is this hypocrisy that infects the liberty and freedom at the heart of our nation.

Don't use plagiarized sources. Get your custom essay on
“ Anti-Slavery in United States ”
Get custom paper
NEW! smart matching with writer

All men are created equal. America was founded on the ideals of liberty and independence. Independence, liberty and pursuit for happiness is an inalienable birthright bestowed to all human beings.

In accordance, the Declaration of Independence (Source D) states that “all men are created equal that they are endowed by their Creator with certain unalienable Rights, that among these are Life, Liberty and the pursuit of Happiness.” and yet we continue to build upon the exploitation, widening the recreant schism between ourselves. Enslaving people does not subscribe to these core values that our nation claims to possess. Slavery has brought great sin and degradation upon our country. As Frederick Douglass once said, “Every slave is a stolen man every slaveholder is a man stealer.

” Would you trust a man who looks at another with disdain only to turn around and treat another person better? Slaves were stolen, captured from their own lives, homes, friends and separated from their family. Hence, by no means nor precedent makes slaveholding a justifiable matter in our country.

“Slavery has been taking a downward course for seventy years adding horror to horror, bloody statute to bloody statute, selfishness to selfishness, privation to privation, until the Anti-Slavery movement, from without, has succeeded in turning the eye of the world upon the Slave Power, and restraining its course of unmixed selfishness” as remarked by Wendell Phillips (Source E).

Looking through the declarations of the past, or to those occupations of present time, the national conduct remains untouched. Our nation holds magnitudes that seem equally horrific and revolting. Our nation is tainted with slavery, strengthening the oppression and hypocrisy that lies within it. I cannot be ignorant to the subject of slavery, but regard the tyranny in every form, that of which promotes this hypocrisy and atrocity of rights. How could a man rightfully allow another man as his slave, while subscribing to the Declaration of Independence? Would you trust your neighbour, the tyrant? Disregarding the fact that they hold human instincts with absolute indifference and detachment to human life. In Frederick Douglass’ speech (Source C) he mentions, “Men and women, old and young,married and single, were ranked with horses, sheep, and swine”, to which we see the dehumanising effects of slavery.

Thus, generational anger, hostility and prejudice is strengthened, bound together by the existence of slavery. Revolts have happened in antiquity – take the Romans as an example.

How can we declare ourselves a free nation when slavery still lingers in our waters and on our land? Hatred will permeate through our generations, strengthening the perpetuation of racial discrimination and segregation which will lead to generational racial prejudice. As Amos Lincoln says in the Slave Narratives from the Federal Writers Project (Source A): “Elisha Guidry he my master in slavery. He had lots of slaves. He whip my pa lots of times. He unwill’ to work. He whip my ma, too. ” This was abuse not uncommon for slaves. This revolting injustice and cruelty to which enslaved African- Americans are the constant victim, fettered and looked upon as properties, forced to work in brutalising conditions.

Now, let me say, in conclusion, what has to be done? The answer is determined by whether our nation can follow the righteous values for the path of life, justice, liberty and prosperity for a greater future for our country, for the love of God and the generations to come. To abolish this evil, atrocious and cruel aspect of slavery as a whole. Liberty and freedom is a right for all human beings. As William Lloyd Garrison (Source B) once said: “Be faithful, be vigilant, be untiring in our efforts to break every yoke and let the oppressed go free”. If not now, when? If not us, then who? Let us not leave more work for the future generations. We should not procrastinate on this. Hence, I call upon our nation to make the right decision for our country and its people. 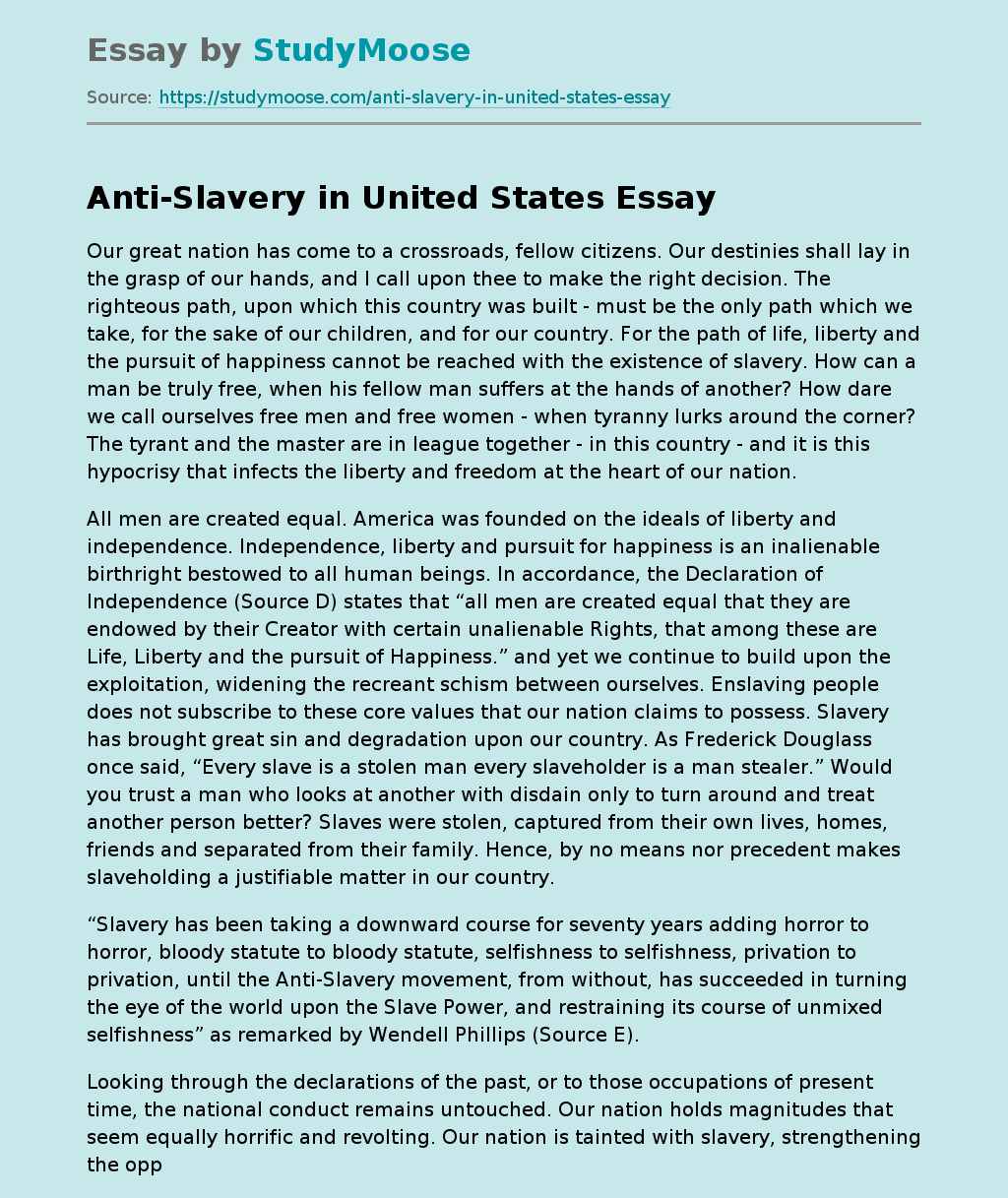