To bring awareness to my audience about animal cruelty. Introduction: As humanity has grown, there has been an increase in authority and rules and regulations of everyday life. One of these rules is animal cruelty. Animal cruelty simply means cruel unjustified treatment of animals and sometimes pets to unnecessary harm and pain. One principal type of animal cruelty is torture. It is not ethical, moral, or legal but we humans do it..

One of the places we see the most animal cruelty is in the circuses.

Don't use plagiarized sources. Get your custom essay on
“ Cruel unjustified treatment of animals ”
Get custom paper
NEW! smart matching with writer

Animals in circuses are regularly and dangerously exposed to many abuses and diseases. Circuses do not practice what they preach and indulge in animal cruelty on a regular basis, after the training sessions of the circuses, tight collars, whips; beatings and torture are the order of the day for these animals. Elephants are one of the animals that suffer from major diseases in the circuses like tuberculosis and can infect humans with the bacterial disease.

Some cases show that the elephants were not cured medically for wounds caused during beatings and other natural causes. Circuses have known to keep a large amount of soil ready, to hide the wounds and the blood on the elephants. Some elephants have also suffered from lameness, arthritis and food abscesses. Elephant deaths in circuses are normally caused due to osteoporosis. Elephants suffer from Osteoporosis simply because they do not have wide spaces to move around. Due to the cruel treatments, it has been proved that circus animals are dying at a higher rate than they are breeding.

Circuses teach children that it’s acceptable to abuse and mistreat animals for amusement Another animal cruelty is with dogs, people seem to think that fighting is a dog’s nature. Dogs are not the same as humans, but dogs do feel physical pain. Just because a dog can’t say “That hurts! ” doesn’t mean they don’t feel pain. Dogs also suffer from feelings such as loneliness when left chained. That’s why they howl and bark, to try and get some attention and if they are ignored dogs stops howling, it’s because he’s given up hope.

So much cruelty is involved in dogfighting. Dogs are tortured to make them violent. Kittens and puppies are used as bait to teach dogs to kill. Illegal drugs and weapons are usual at dogfights. Fighting dogs usually live on chains their whole lives. Other animal cruelty we see is when they make experiments on animals, like monkeys, mouse, gineapigs etc. Monkeys and others animals do not have identical immune systems as humans, and may not respond to drugs or vaccines in the same way.

Animals are often depressed alternatives for humans, and some mixtures that may well cause no harm to an animal, could seriously harm a human being. Also, a drug that is toxic to the animal it is tested on may have no toxicity, and even healing benefits in humans. Pain and suffering still occur, and simply being in captivity can cause great distress to animals, just as it would to a human. We most of the times forget the pain and suffering we are causing to animals, we use them as objects of study, rather than live creatures, and this can mean they are treated as disposable rather than indispensable. 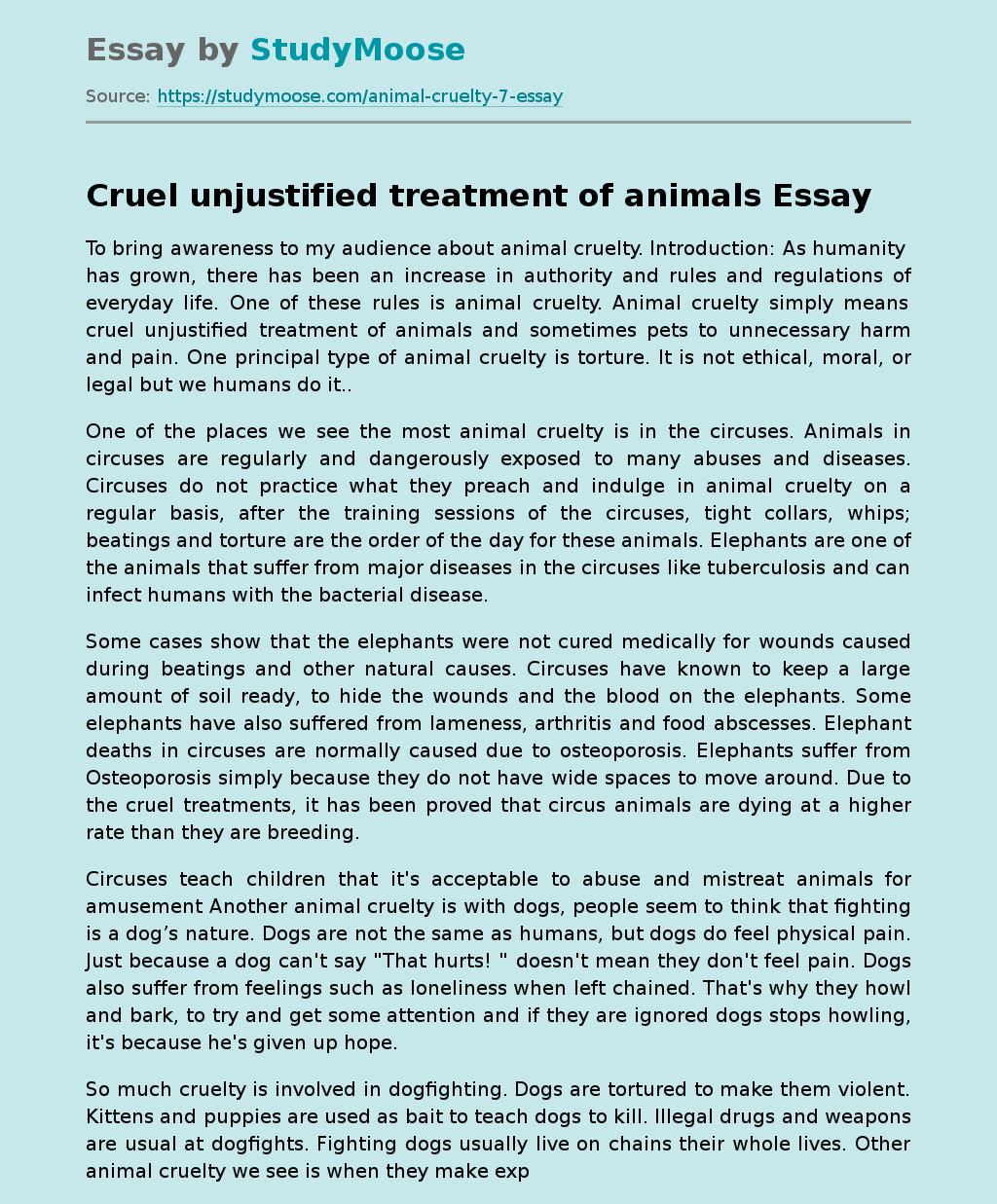