A Book Review on “Under a Cruel Star”

A narrative memoir of the author Heda Margolius Kovaly given in her book Under a Cruel Star depicts the tragic history and stories of various chaoses including the Czechoslovakia turmoil and Soviet Union. In here, she tells how their lives moved through dilemma just to adapt in certain situations where her religious practice, gender, social and economic status are relevantly part in her way of living.

Heda Kovaly’s narration is made up of her observations, lessons learned, experiences, ideas, and some of her justification towards her decisions made, in which we can conclude that some are without the presence of her willingness or should we say just an act of woman’s submissiveness to her husband.

Don't use plagiarized sources. Get your custom essay on
“ A Book Review on “Under a Cruel Star” ”
Get custom paper
NEW! smart matching with writer

As a brief recapitulation of the book, Heda opened up telling that the three forces shaped in the past history also formed her life as a whole. She recounted every episode of their lives although not in details.

It started up from Heda Kovaly’s experiences in 1941 before he got married to Rudolf Margolius during the turmoil in Prague, Czechoslovakia under post-Nazi regime.

Her deportation from Prague to Lodz ghetto in Auschwitz opened up disruption of her supposedly peaceful life. She mentioned how she managed to escape from the marching prisoners of war heading to Reich, Germany. Right after Prague chaos, she met his childhood sweetheart Rudolf and got married to him.

Rudolf was a survivor of Nazi government’s several concentration camps; however, unlike other Nazi victims who utterly opposed communism ideals, Rudolf embraced this thought and therefore got a life out of it.

Heda became a follower of her husband’s beliefs and principles. It ended up when Rudolf got arrested in 1951 with the reason of advocating his ideology, and it followed his execution after the Stalinist trials in which Heda herself witnessed.

Just imagine how painful and helpless it is on Heda’s part to see his husband dying in the prosecution, and this feeling of Heda has shared with her readers as it magically brought by her narration. Hardships and sufferings pushed Heda to live despite harassment of the society as a result of just being Rudolf’s wife and partner. Heda remembered how the society persecuted her and her son by means of forced evacuation from their rented house, hastily and rudely dismissal from the hospital amidst necessary medication, and religiously losing her job one after another.

Such difficulties ran for five more years following Rudolf’s death. However, Heda’s willingness to live continued as she believes that their journey did not stop on Rudolf’s imprisonment and execution. Instead, it opened up another episode of her life where she survived really hard to be able to support and augment their child’s basic needs. More than a decade after that nightmare, Heda received an invitation from the Czech government as the latter said revocation of Rudolf’s name in the Stalinist show trial. Heda insisted total absolution of Rudolf’s name and a publicly retrial of the case.

She also radically demanded that the Czech government has to admit solely the guilt that it has to make a public apology for the victims including Rudolf and his family. Thus began Heda’s open advocacy opposing Communism as well as Stalinism, and to encourage everyone to stop anti-Semitism views whether in Czechoslovakia, in Europe, or in the world as a whole. Heda wrote the book basically with the purpose of enlightening the readers about such experiences of a Jewish family, specifically a Jewish woman in Czechoslovakia under Nazi government and Communism though she mentioned dedicating the book for her son to Rudolf Marqolius.

Her audience could be anyone who is interested in historical topics such as political and social evolution in Europe and their impacts on the world history in general. Though the book failed to follow proper formatting as it is only a narrative of Heda’s own story and experiences and that it is transcribed in an informal way, it also fails to meet historical analysis and proper illustration. However, the help and information it could bring to the students who are known being idealists are quite immeasurable.

They will surely love reading this book again and again as it inspires their modern principles and ideals. Under the Cruel Star is not designed to be a university textbook but it helps in a way educating the students especially of History courses such as History 101 which tackles Themes in Modern History like ours. Surely, Heda Morgolius Kovaly’s story could be a glass of cold water poured on fire. It means that a communist believer who happens to read this book would change his belief reading this. It makes possible as the testimony entails drastic impact to the lives of innocent ones in the past.

On my part, the book signifies peaceful victory over chaotic ambiance having Heda’s view of love over hate. Like Heda who happens to forgive the tragic past, and use it to advocate equality through her text irregardless of many difficulties including her religious beliefs being a Jew. To conclude, I should say that I have learned through this book that what really important is how a victim of a wary world remains peaceful at heart in the end.

A Book Review on “Under a Cruel Star”. (2017, Feb 09). Retrieved from http://studymoose.com/a-book-review-on-under-a-cruel-star-essay 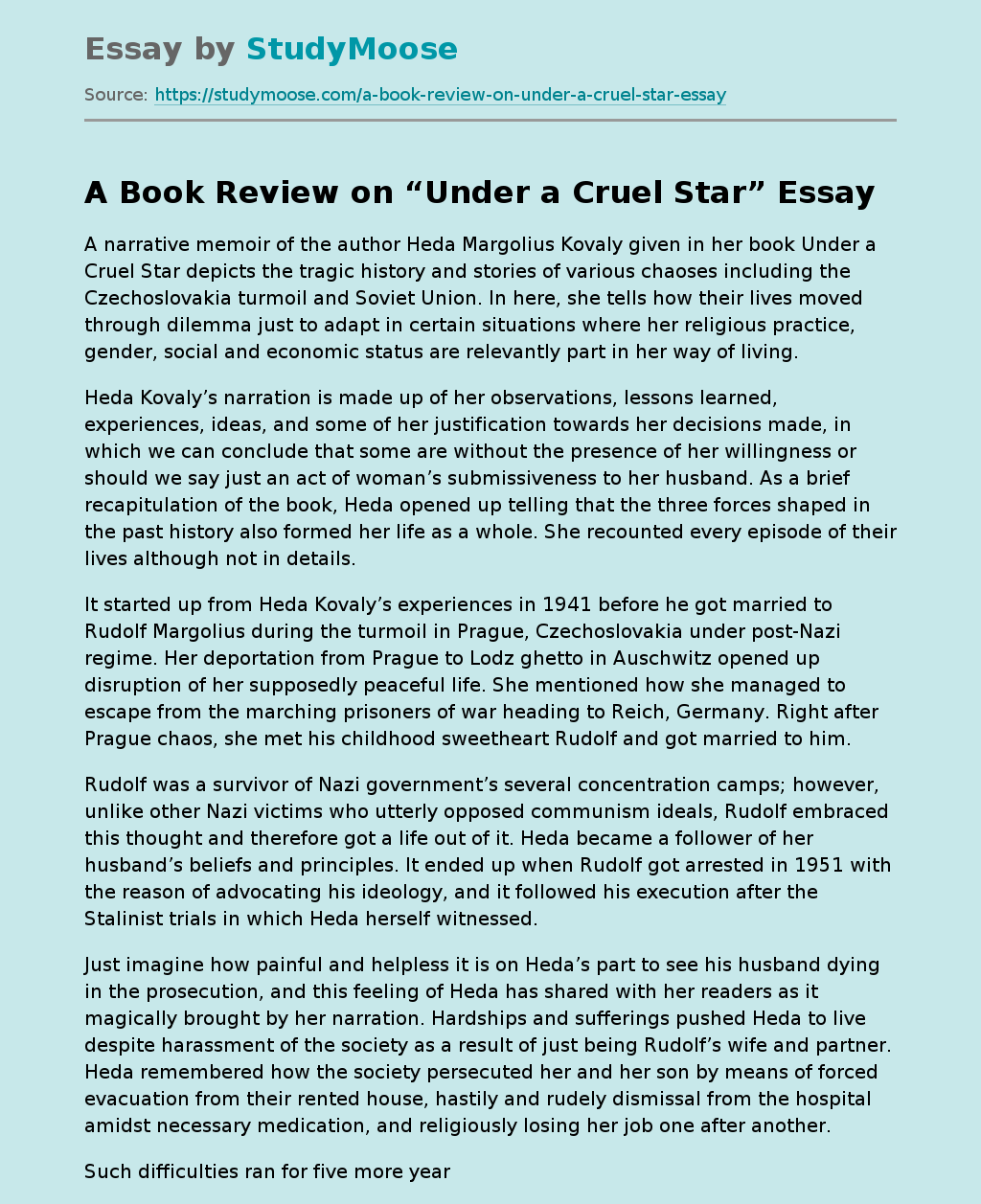