Don't use plagiarized sources. Get your custom essay on
“ Andy Warholpainting ”
Get custom paper
NEW! smart matching with writer

The most popular characteristic is probably the paintings that look like they were cut out of a comic book. In case the term popular culture is a mystery to you here’s a little example. Take for instance Holland’s got talent’. The program is built in a way that people will feel like they are building a bond with the contestants by for example, the audition process and letting the viewers vote in the end for their favorite contestant.

Once the audience starts to show interest in a contestant’s career they are likely to buy their albums which in the end benefits the show producers massively because they will earn a certain percentage of the money because they got the contestant their five minutes of fame that were needed to show off their abilities. These types of situations are also often referred to as mass culture. 32 Campbell’s soup cans resembles quite obviously the idea of mass production which is often advertised on the market.

Warhol was inspired after he saw such an advertisement and decided to make a move on his inspiring feelings. Even though the advertisements were printed, the paintings were handmade. You might have also noticed the fleur de lys pattern on the bottom edge, this pattern also wasn’t done mechanically, it was stamped by Warhol himself. Warhol had known the company for a while now and he was a big fan of it according to a comment he made: I used to drink it. I used to have the same lunch every day, for 20 years, I guess, the same thing over and over again. Another thing you might have noticed about the paintings is that none of them are the same. Warhol painted 32 variations to mimic all of the then available flavors of the Campbell’s soup cans. When the paintings were first released Warhol put them all together so that it looked like you were walking past a supermarket aisle. The use of color in these paintings is very minimalistic, this is because instead of painting something original, Warhol copied the exact cans of soup. Since the label of Campbell’s soup cans was red, the main color of these paintings was also red. Another thing that did not play a huge roll in the composition of the paintings was the use of light. Because the cans are not in an actual environment, there is no light involved. All the paintings are equally bright with no shadows to show the indication of any light being present in the paintings. A lot of people question why this piece is considered art, since it has almost none of the requirements to label something art. Well I think it’s because at the time (around the 1960’s) the American population was becoming more used to the invention of branding and advertisements. Warhol decided to shock the art culture by doing something that was basically more of a tribute to society than it was painting something unique, which was something that had never been done before. This made his work instantly recognizable and iconic. Another thing that made these paintings really stand out from others was the fact that it wasn’t really seen as art by everyone. Some people thought that these paintings were only meant as advertisements, not as a piece of art that would go down in history as one of the most iconic painting ever. This resulted in lot of controversy over the paintings, which was in a way a major advantage for publicity. This only proves the point that sometimes you just have to take a step into the deep and just see where you end up. Who knows, maybe you’ll end up a famous painter?We chose this this piece of art mainly because it was so different from everything else we’d seen. We think that Warhol made a bold move by doing something so unique and different and we really respect him for doing that, because if he hadn’t. the world of marketing, advertisement and art might have been very different right now. We did struggle with how we wanted to give the painting our on personal touch, because this piece is so minimalistic, but we decided since so much of the uniqueness from this painting came from the fact that it wasn’t only one painting but 32. We thought it’d be a funny idea to add another non-existent flavor to the collection. We did a very thorough research on which flavors didn’t exist yet and we ended with a delicious broccoli soup. —————————————————————————————————————— 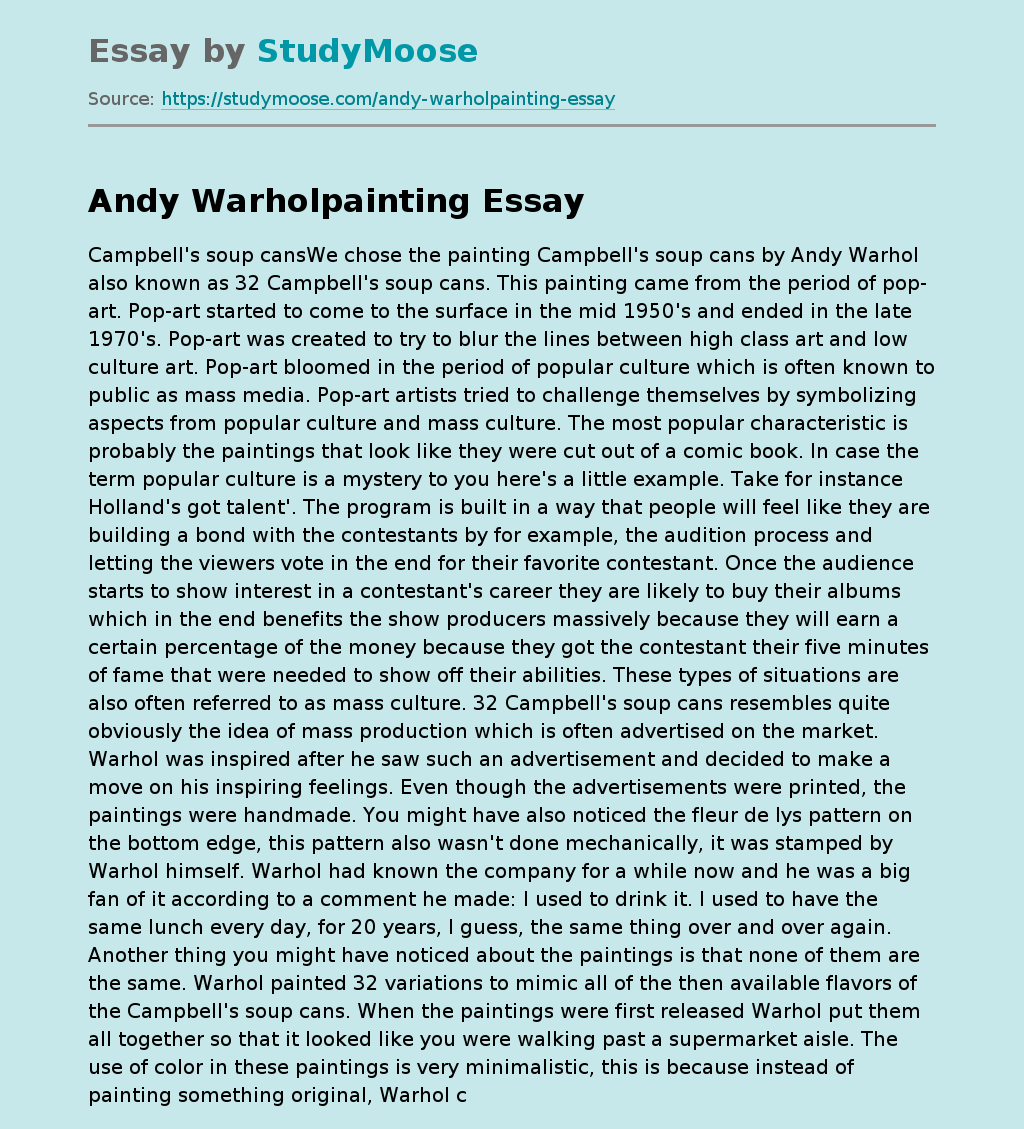