During the earliest years, children interact primarily with people. Their interactions with toys are usually in the context of human interactions as well. They need to freely explore, manipulate, and test everything in the environment. Increasingly in today’s world, this includes the exploration of technology tools and interactive media. Children of this age are drawn to push-button switches and controls. The early years are a time of rapid learning as parents prepare their children for the upcoming challenges of school.

Don't use plagiarized sources. Get your custom essay on
“ Android Apps ”
Get custom paper
NEW! smart matching with writer

Basic concepts and skills, eye coordination, can all be taught at this age.

Recognizing sounds, letter and numbers are early pre- literacy skills crucial to the foundation of future learning. Children who can identify letters, number and sounds when entering kindergarten will be well-prepared to learn to sound out words and read. The use of technology can facilitate young children’s recognition of animal sounds, letters and numbers with so much fun.

On the course of the study, the researcher found out the following problems: Many Smartphone Apps might become harmful to toddlers.

Smartphone Apps that is hard to use and complicated for the toddlers. Wrong selection of Apps that has non-beneficial to the growth of toddlers. Apps that have no interaction to the user.

OBJECTIVES OF THE STUDY

Technology today is really necessary especially when it comes to education. To the kids/toddlers – Fast development for their recognition skills in alphabets, numbers and sounds of animals. The study can be a great help in accelerating children’s reading ability. Toddlers will be well prepared to learn the basics the time they enter pre-school. To the parents – Save more time to do their home job. Smartphone can actually babysit their children while they are busy (cooking or cleaning the house etc). To the future developer – Encourage them to develop more usable and credible application.

Input: Process: Output: DEFINITION OF TERMS Paint – Have fun with an additional functionality of the proposed program. There are three categories: animals, toys and trees. It allows the user to have fun with the pictures. Alphabet – From A to Z. Sounds play every time the user touches the letters and images. Animals – Different animals that have sounds every time the user touch the image. Numbers – Counting numbers 1 to 10. App Inventor – An open source, Web-based system developed by Google that allowed people to create Android apps without having to know how to code.

Instead of writing code, the Android mobile app can be visually designed with App Inventor. Emulator – Use to test the project in Appinventor MIT. Java – is a computer programming language that is concurrent, class-based, object-oriented, and specifically designed to have as few implementation dependencies as possible. It is intended to let application developers “write once, run anywhere” (WORA), meaning that code that runs on one platform and does not need to be recompiled to run on another.

Fun painting was developed to teach kids about colors and drawing. With a choice of three colors, red, blue, green, you can draw anything you want on a cute cat. You can press the clear button to clear your drawing and start over. There is no save button to save your work to send or share it on facebook. You can click next button to go in the next picture then paint it.

Kids Zoo is a fun package to learn the animal world for little toddlers. It is a fun android application for kids and toddlers to recognize animals and their different sounds. It is designed for kids; all of the pictures are cute and have sound. for surely the kids will like it. The application is easy to use. It is very simple there is no scoring or logic so it’s stress free fun for kids. All they have to do is touch the buttons and pictures to hear the sounds of animals.

ABC for shows the alphabets A to Z with their sounds. It is a fun application specially designed for kids and toddlers to recognize the alphabet sounds. The application is easy to use. You just have to push the sound button to play the sound of alphabet, and then the next or previous button to move to another letter. The processes of each page are all the same.

Alphabet flash card is a fun way of learning the alphabet of the Tagalog language. The deck contains 20 letters aimed to aid kids or even adults in identification and pronunciation. A bonus feature of doodling the pictures will surely give the kids something to recall. Abakada Alphabet is best not only for Filipino kids living in the Philippines or abroad but also those who want to start learning the Tagalog language while having fun.

CountRok, created by Jeprok Apps, is designed as an educational application for the Global Filipino Family to learn the basics of Counting in Tagalog (Filipino). It’s a cool and smart application that teaches counting from 1 through 10 in Tagalog and English.

Screens have simple buttons for arrows to move back and forth and a play button for audio. Graphics are colorful and animations help to keep a child’s attention.

The proponent decided to use agile software development because it promotes adaptive planning, evolutionary development and delivery, a time-boxed iterative approach, and encourages rapid and flexible response to change. It also emphasizes face-to-face communication between the developer and the stakeholder who provide the desired software requirements.

And at the end of the iteration, a working product is demonstrated to the stakeholder to minimize overall risk and allows the project to adapt to changes quickly. Thus the final software output is developed with minimal bugs which are exactly what the stakeholder wanted.

Agile Methodology Development Cycle shows the software development cycle of agile methodology. Therefore, attributes of the said method are well suited to the development of the proponent’s educational android application.

In this stage, the proponent came up with the idea of creating an educational Android application. It is an educational application that will help kids and toddlers for developing their recognition skills of the English alphabet, numbers, animals and sounds.

In this stage, the development of the software took place. The proponent added functionality to the design. Every finished output was built and tested to detect possible program errors. Iterations or changes were done from time to time to correct imperfections. Improvement of design, graphics and expansion of software’s features was observed.

It was checked by the software project professor, technical adviser and stakeholder (pre-school teacher) who added functionality and concept to the overall software design or removed some. Every suggested improvement was noted to be implemented on the next iteration of the software development. Agile methodology decision making cycle shows that in every phase of the software development stage, the stakeholder gives his feedback. It is considered by the proponent to ensure that the final software will contain the attributes of the good software.

The software was prepared for final checking after the approval of the software project professor and technical adviser. It was based on the test done on the development stage where software was ensured to be free from bugs and errors. Demo was done for final software assessment.

This project entitled “First Step” is an educational android application for toddlers. The study sought to create an educational game for kids to develop their recognition of sounds of animals, numbers and the alphabet.

The project also aimed to maximize the use of technology in a good and practical way and to obtain more knowledge. The project also aimed to create interactive software for the kids. In addition to the software project, the researcher gathered valid information through internet research and interviews from an expert in programming and a pre-school teacher who has an expertise in working with children. The features of the proposed android application are painting, counting numbers, and recognizing alphabets and animal sounds.

The finalization of software has led to the following conclusions pertaining to the software’s attributes: The android application is maintainable since it is created using the agile methodology which acknowledges the feedback of the stakeholder. It evolved thoroughly as the stakeholder changed the product requirements. The android application is dependable It doesn’t cause harm or damages to any users since it is an educational tool only. It doesn’t contain confidential data accessible by the users given that the software has built-in images only which are used in topic simulations.

The researcher recommends parents to use First Step android application to speed up the learning process for toddlers. They can use their gadgets for teaching instead using and buying manual flash cards for the kids to learn about alphabets, numbers and animals. It’s practical to use gadgets since all have them.

The proponent also recommends to the parents of young Smartphone users to: Explain to your children that screen-learning must be balanced with other activities, and limit their Smartphone or table time. Set daily limits early, and stick to them. Use your mobile device as a babysitter as seldom as possible. Choose credible apps that offer a legitimate educational component. Games are fine, but try to find apps that teach and expand your child’s growing brain. Talk to your kids about what they’re learning from their Smartphone apps. Ask them questions, and check out the apps yourself and get involved in their activities.

Don’t let your young kids isolate themselves for too long with a Smartphone or tablet. Consider using parental controls (like NQ Family Guardian ) to ensure your child is protected from the bad stuff and can only access the good stuff at appropriate times. You can also monitor your child’s location and allow your child to alert you when he needs you. For the future developers the proponent recommends to create credible application that can be beneficial for the next generation. Use your talents in building good application that are harm-free for the users. 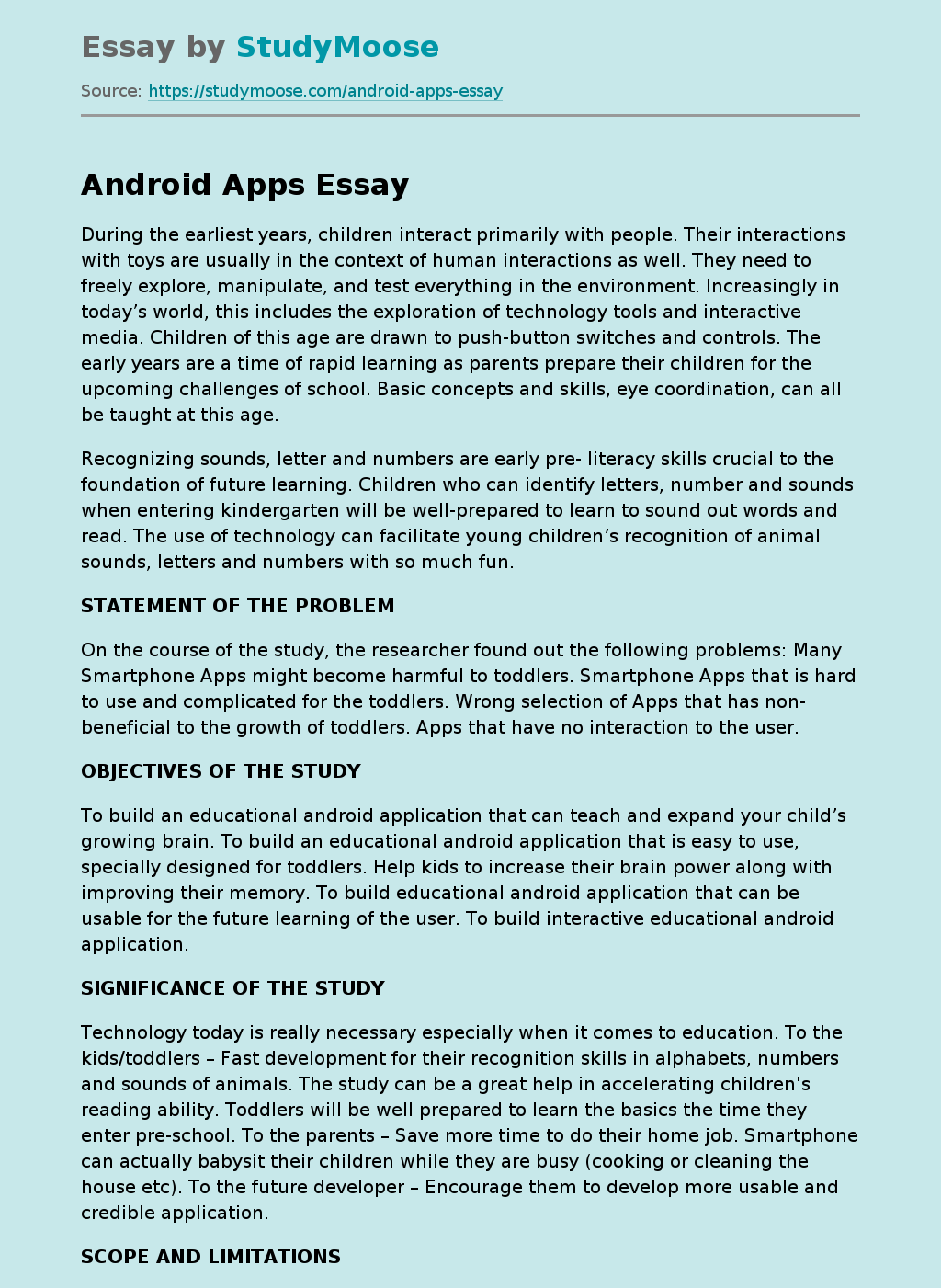