In the first stanza he uses persuasive techniques such as flattery. The speaker tells his mistress what they could achieve in their relationship if they had enough time. You have heard the expression all the time in the world. That is what the speaker is referring to in line 1. He is saying that if they had all the time in the world, her coyness would not matter. He mentions religion from Noah’s Flood (line 8) until ‘the conversion of the Jews’ in line 10.

Don't use plagiarized sources. Get your custom essay on
“ Andrew Marvell’s Poetry To His Coy Mistress ”
Get custom paper
NEW! smart matching with writer

He mentions religion so that he can make her believe what he is saying. In lines 11-12, the speaker states that his:

My vegetable love should grow

vaster than empires and more slow;

‘My vegetable love’ is a metaphor. This growth would eventually overtake empires bigger than those of the Romans. Thus his love is big enough to fill time and space. It is also a metaphor. He would spend so much time adoring her.

However in the second stanza he writes about death.

The argument in this section is based on the fact that people do not have the kind of time span that the speaker imagines in the first section. Instead of having all the centuries of time to wait for the lady, he tells her that he hears ‘Time’s winged chariot’ hurrying close behind him. Time is personified as the driver of a chariot. Chariots were swift moving war machines ridden by the most powerful warriors. This chariot has wings so it travels faster.

He emphasises the fact that in death there is nothing left. Her beauty will have vanished and his songs will not be heard in her ‘marble vault’. The fact that she will be buried in a ‘marble vault’ shows that she is a relatively wealthy person but what good will her wealth be to her? Then, as he says in lines 27-28,

Marvell is forcing his mistress to think about the fact that what she fears will happen anyway but instead of being pleasant it will be the result of her death. This is an attempt at persuasion through fear.

However in stanza two he proposes a solution. While her ‘youthful hue/ Sits on (her) skin like morning dew’ she should make the most of it. The ‘hue’ he refers to is her beauty or her beautiful skin, which is fresh and soft like dew. At the beginning of the poem, he presents her as needing to be persuaded. He refers to himself and the lady as ‘we’ in stanza 3 of his argument, suggesting that they think alike. He also speaks of her ‘willing soul’.

Now let us sport us while we may;

Rather at once our time devour

Than languish in his slow-chapped power.

Marvell does not say that sex will be fun. He compares the two of them to amorous birds of prey, that is, wild creatures they will be violent in their lovemaking. They will eat time without thought or ceremony. Later he speaks of the need to: tear our pleasures with rough strife

Thorough the iron gates of life:

He wants them to,

roll all our strength and all

Our sweetness up into one ball

To roll everything up into ‘one ball’ suggests a physical joining together. 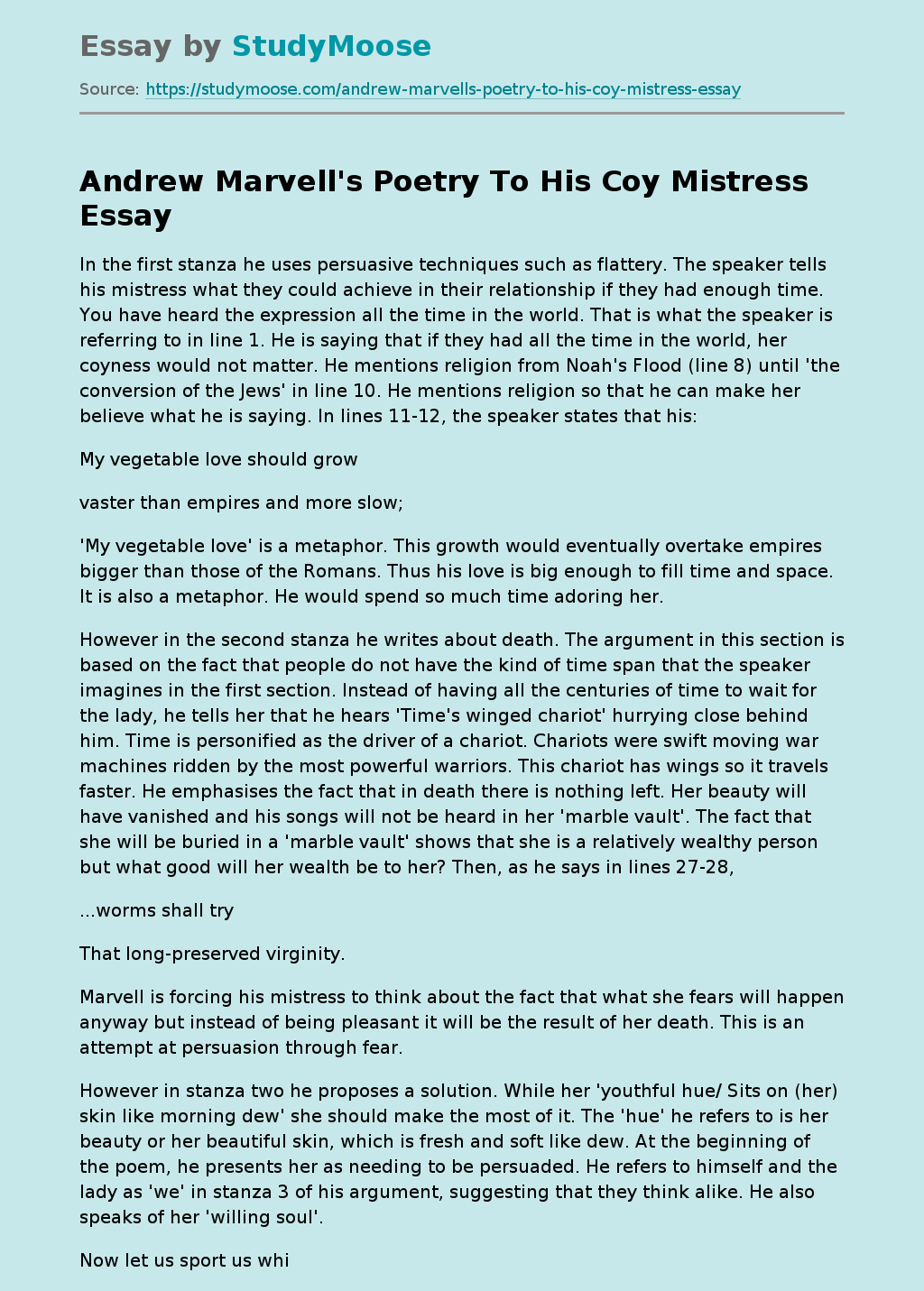