Analysis of Youngsters' Behavior and Rebellion

Teen rebellion is a problem that’s been around ever since teenagers have. Almost every teen goes through some sort of rebellious stage in or after the precious years of puberty. It’s a problem that’s caused by a number of attributes, the two main being teenage hormones and attitude. It’s a superiority syndrome that teens get to let the world “adults” know that their views and opinions are not to be reckoned with. And with such a stubborn mindset that teen rebellion comes with, it can sometimes be impossible to tell them otherwise or make them listen to reason

This study investigated the impact of parenting style on teenagers’ rebellious behavior.

Don’t waste time
Get a verified writer to help you with Analysis of Youngsters’ Behavior and Rebellion
Hire verified writer
$35.80 for a 2-page paper

The instrument used to elicit responses from the respondents was a structured questionnaire designed by the researcher. The instrument revealed reliability coefficients of .71 and .76 respectively.

A rebellious teenager in a household can cause tremendous stress and disruption in your family life. Shipping your teen to a remote island is unfortunately not a practical solution. Boosting pharmaceutical sales of Prozac can be costly in many ways. A visit from Child Protective Services might bring more harm than expected. Understanding the cause and sharpening our parenting skills might be a better route to take to minimize teenage rebellion. The result can be very rewarding both in the short and long run.

1. Why there are teens became rebellious?

Teenage years are a crucial part of growing up. At this stage, they love to explore things and when they are not permitted to do what they wanted, they will rebel. If parents don’t know how to deal with their teens it will be a problem. They will become rebellious at home or even in school if teachers don’t know how to handle teen agers, they might be the contributing factors of their rebellious attitude. I had been in close contact with teen agers when I was teaching and I was once, an adviser of a teen club. I know how it feels when dealing with teen agers. They want to prove to adults that they can do things their own way. They don’t want to be controlled and be under the demands of anybody. They want a mentor who can understand them and give them chance to prove themselves. (Palladino p.24)

2. How to manage their behavior?

Set clear house rules and stick to them. If your teen is supposed to finish her homework before using her cellphone or computer, don’t occasionally allow her to procrastinate to use social media. If you’re cracking down on back talk and snide comments, address your teen’s snarkiness rather than ignoring it. You need to be consistent in your discipline, or you’ll delegitimize your own rules.Monitor your teen’s media use, and be mindful of the TV shows he watches, the music he listens to and the websites he visits. Teens sometimes emulate the nasty dialogue and behavior they witness in the media. However, don’t shelter your teen unnecessarily. Allow him to pick his own entertainment while maintaining polite, mature behavior. If he can’t do both, limit his media options.(Brake p.335)

4.How to avoid rebellious teenagers?

Be a good role model. Be consistent and fair. Be Involved. Be understanding. Be generous. Be a good chauffer. Be a good host. Be wise. Be patient. Be a good listener. Be less critical. Be supportive. Be humble. Be human.(Goodman p.35) C. Definition of Rebellious Teenager?

As part of their development into young adults, humans must develop an identity independent from their parents or family and a capacity for independent decision-making. They may experiment with different roles, behaviours, and ideologies as part of their process of developing an identity. Teenage rebellion has been recognized within psychology as a set of behavioural traits that supersede class, culture, or race.(Santos p.22)

What is Teenage Rebellion

Adolescent rebellion begins as a result of the desire for independence. It is a developmental norm. In fact, if some have the sneaking suspicion that teenage rebellion may be inevitable, they’re right. Pretty much every teenager will test the limits ² and even cross the line at one time or another. Of course, there are varying degrees of rebellion one parent’s ´rebellious childµ may be another parent’s dream child. Nevertheless, even the best-behaved child will go the wrong way at some point. As a part of the teenage community, there is very little we haven’t seen in the way of teenage rebellion, sex, drugs, school expulsions, runaways, disrespect, car accidents and peer pressure. The list goes on. ´The good news is that this does not have to be a crisis. In fact, rebellion can be a very healthy and integral part of your adolescent’s transition from childhood to adulthood.(Douglas p.16)

Teenage rebellion has been around for hundreds of years, in fact, in a paper written by Dr. Scott J. Larson, president of the Massachusetts based juvenile program Straight Ahead Ministries, he cites an interesting quote from Socrates. The quote referred to youth as having bad manners and no regard for the elderly, a contempt for authority who tyrannized their teachers and contradicted their mothers and fathers. While this description may sound like a teenager in your home, Socrates wrote this in the third century B.C.E. But teenage rebellion goes back even further. The Book of Genesis, written between 1450 and 1410 B.C.E. tells the story of Esau and Jacob. Jacob lied to his father and rebelled to steal his brother’s birthright .(Larson p.56)

Teenagers can rebel in many different ways, active and passive. Teenagers can blatantly disrespect their parents by outwardly behaving in an unacceptable way or by passively ignoring the standards of acceptable behavior that their parents have set for them. Teenagers may rebel against their parent’s rules, religious beliefs or moral code. Teenagers may also rebel against others in authority such as teachers, principals and even law enforcement officials. They may choose to show disrespect for these individuals and for their rules. For example, a teen may refuse to adhere to a school dress code or the legal drinking age and may show complete disrespect to the person in authority who addresses the issue.(Oscar p.55)

According to the eight stages of development created by psychologist Erik Erickson in 1956, teenage rebellion is a normal stage of development that occurs during the fifth stage of development between the ages of 14 and 20. As a child begins to really explore who they are they test boundaries, take risks and experiment with behavior.(Austin p.65)

Teenage pregnancy is pregnancy in a female under the age of 20 (when the pregnancy ends). A pregnancy can take place as early as two weeks before menarche (the first menstrual period), which signals the possibility of fertility, but usually occurs after menarche. In healthy, well-nourished girls, menarche normally takes place around the ages 12 or 13. Whether the onset of biological fertility will result in a teenage pregnancy depends on a number of personal and societal factors. Teenage pregnancy rates vary between countries because of differences in levels of sexual activity, general sex education provided and access to affordable contraceptive options. Worldwide, teenage pregnancy rates range from 143 per 1000 in some sub-Saharan African countries to 2.9 per 1000 in South Korea.(Innes p.76)

Alcoholism is a broad term for problems with alcohol, and is generally used to mean compulsive and uncontrolled consumption of alcoholic beverages, usually to the detriment of the drinker’s health, personal relationships, and social standing. It is medically considered a disease, specifically an addictive illness, and in psychiatry several other terms are used, specifically “alcohol abuse” and “alcohol dependence,” which have slightly different definitions.In 1979 an expert World Health Organization committee discouraged the use of “alcoholism” in medicine, preferring the category of “alcohol dependence syndrome”.[2] In the 19th and early 20th centuries, alcohol dependence in general was called dipsomania, but that term now has a much more specific meaning. People suffering from alcoholism are often called “alcoholics”. Many other terms, some of them insulting or informal, have been used throughout history.

The World Health Organization estimates that there are 140 million people with alcoholism worldwideThe American Medical Association supports a dual classification of alcoholism to include both physical and mental components..The biological mechanisms that cause alcoholism are not well understood. Social environment, stress,[mental health, family history, age, ethnic group, and gender all influence the risk for the condition. Significant alcohol intake produces changes in the brain’s structure and chemistry, though some alterations occur with minimal use of alcohol over a short term period, such as tolerance and physical dependence. These changes maintain the person with alcoholism’s compulsive inability to stop drinking and result in alcohol withdrawal syndrome if the person stops.Alcohol damages almost every organ in the body, including the brain. The cumulative toxic effects of chronic alcohol abuse can cause both medical and psychiatric problems.

Analysis of Youngsters' Behavior and Rebellion. (2016, Oct 30). Retrieved from http://studymoose.com/analysis-of-youngsters-behavior-and-rebellion-essay 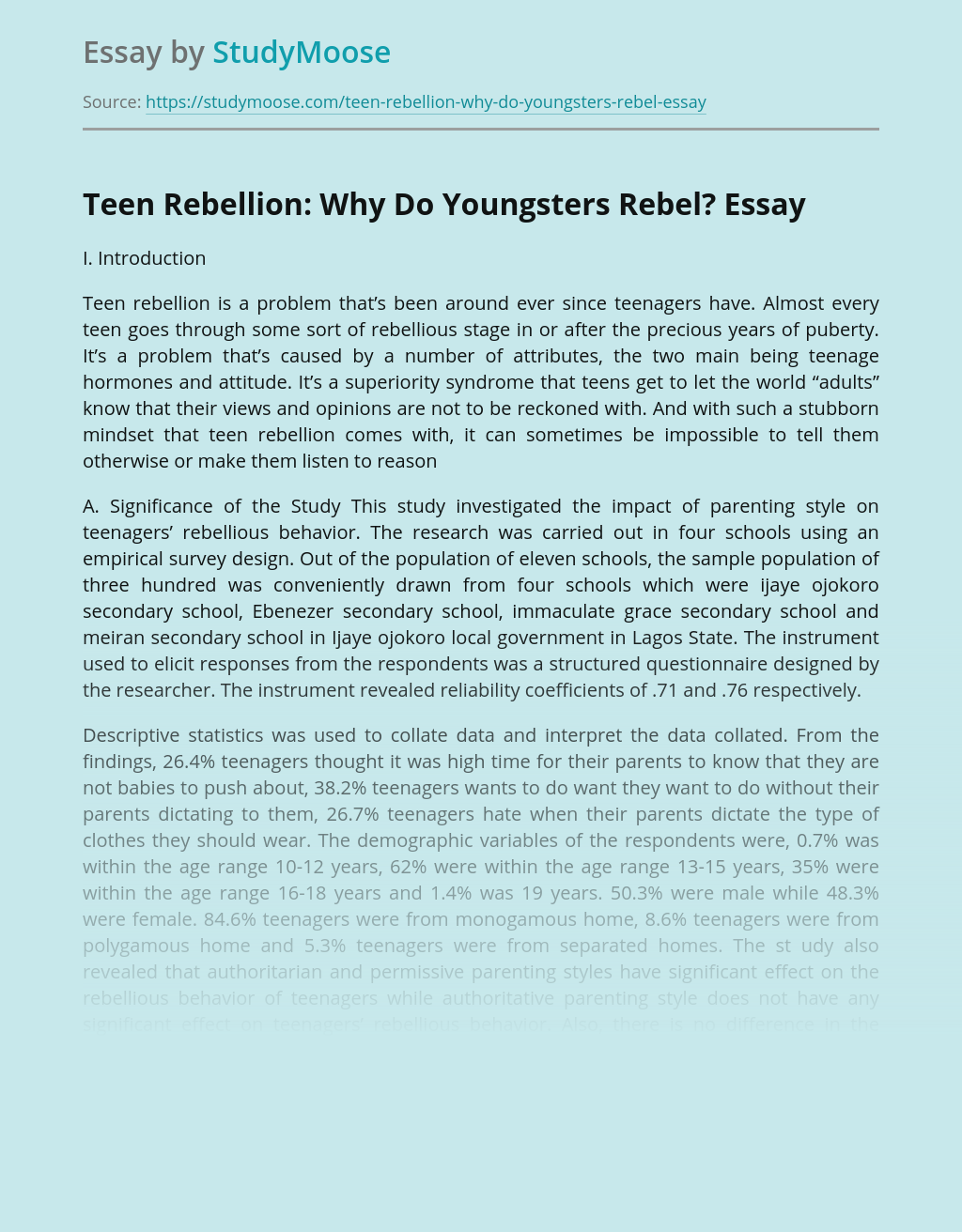 Don’t waste time
Get a verified writer to help you with Analysis of Youngsters’ Behavior and Rebellion
Hire verified writer
$35.80 for a 2-page paper
Stay Safe, Stay Original