Analysis of The Masque of the Red Death

Writer’s Name Professor’s Name English 101 14 November 2013 Chasing Time Edgar strikes fear in the eyes of the reader as the adventure of The Masque of the Red Death takes one through the life cycle from the beginning to death. A terrible disease stormed through the country, killing anyone in it’s path. Not only was it madly gruesome, but dreadfully fatal. With only half of the kingdom left alive, Prince Prospero decided to take the route of a coward.

He let the kingdom fend for themselves, while he gathered a thousand of his favorite knights and ladies and had a never-ending party, “When his dominions were half depopulated, he summoned to is presence a thousand hale and light-hearted friends from among the knights and dames of his court” (Poe 3).

Don't use plagiarized sources. Get your custom essay on
“ Analysis of The Masque of the Red Death ”
Get custom paper
NEW! smart matching with writer

Once the last guest entered the gate doors, no one came in, and no one gets out (seeing as the Prince welded the gates shut). After a few months the prince decided to throw a breathtaking masquerade ball.

As instructed, the guests wore elaborate costumes and masks. The party took place in a strange design and setup.

A series of 7 rooms lead you from the beginning to the end of the party. Throughout all of the rooms, every single one was a bright and cheery color, all but the last room. Black dark and terrifying, what more could one want the 7th and final room to be? Poe takes the reader through a fearful Journey, never letting you sit down to have a cup of tea, never letting you feel at home.

He wants to put the reader on their toes, awaiting a pop-up scene at any moment, awaiting the “Red Death”. Although his guests loved all of the light and youthful rooms, only the brave and adventurous stray away to the depressed gloomy last and final room.

The final room contained numerous clocks that ring and ring every hour, with each ding the partiers stop and pause till the clocks are done. As the clocks struck midnight, everyone noticed a new guest, a very gruesome guest, “there were many individuals in the crowd who had found leisure to become aware of the presence of a masked fgure which had arrested the attention of no single individual before” (Poe 7). The Prince did not find any humor in the fact that the guest was dressed up as the “Red Death”. With that, the Prince ran after the guest. Prince Prospera ran furiously through the rooms slowly reaching the last and final room, death.

Prince Prosperds party showed Poe’s amazing ability to bring symbolism and themes together to form a piece of literary artwork. As the reader visualizes the party, you see 7 rooms moving from east to west. Each room essentially is a different ‘stage’ of the human life. Every room has a different color, which suggests that stage of human life. What first gave away that the suite was set up to be viewed as a life cycle, was the arrangement of rooms from east to west. How brilliant it was to connect this life cycle of a human with the life cycle of a day.

East is usually associated with beginnings and birth seeing as its the beginning of a new day. On the contrary, as the sun sets in the West, people usually associate that with the end and death. sense of rebirth. The color suggests the unknown from which a human being arrives into this world. Following that, the purple room proposes the idea of beginnings of growth, and green being the “spring” of life. Orange represents the summer and autumn of life, while white suggests aging. In the end violet, shadowy and dark, prepares you for the last room, death.

Almost all but a few partiers stay clear of the black room, and why is that? It symbolizes their fear of the unknown, there fear death. “But in the western or black chamber the effect of the fire- light that streamed upon the dark hangings through the blood-tinted panes, was ghastly in the extreme, nd produced so wild a look upon the countenances of those who entered, that there were few of the company bold enough to set foot within its precincts at all” (Poe 5). As the ‘Red Death’ walks from the blue room to the black room, Prospero follows it and they walks the course of life, flowwing from birth to death.

He rushes from the blue room to the black room, where he eventually dies. His party guests also run into the black room to unmask the Red Death, and also die. The course the characters walk in the story is both literally and metaphorically the course from life to death. “And now was acknowledged the presence of the Red Death. He had come like a thief in the night. And one by one dropped the revellers in the blood-bedewed halls of their revel, and died each in the despairing posture of his fall” (Poes 10).

It was no coincidence that Poe wrote ‘like a thief in the night’ as an ending for his short story. This piece of scripture is one of the most famous lines from the Bible. The line derives from Paul’s first letter to the Thessalonians 5:4, where he refers to the last judgement. According to Paul, Jesus or God will appear when the world is least expecting it, and Judge all sinners for all ages. Poe uses Paul’s phrase and relates it to he Red Death. In the story, the Red Death might seem like an “apocalyptic” figure, something that symbolizes the end of the world.

Like the sinners in the scripture, the Prince and all of his friends stupidly ignore the inevitability of death. Instead they take in all of “lifes pleasures”, and in the end they pay the price. The only difference is that instead of a Judgement day, and giving everyone a fair chance, the Red Death happily massacres everyone. The clocks in the story symbolizes life ticking away directly in front of the partygoers faces. They stop each hour to hear the long ding-dong of the large ebony locks, “And then, for a moment, all is still, and all is silent save the voice of the clock” (Poe 6).

The clock stopped ticking with the last guest’s death, and it was like the clock represented the countdown to death and the people knew it. Poe’s main goal in The Masque of the Red Death is to spawn a growing sense of horror and dread in his reader. Throughout the story the guests of Prince Prospero fear the black room almost as much as they fear death itself. The guests of the party not only give the reader the experience of the cycle of life, but an insight on Poe’s insightful use of Bible verses.

Analysis of The Masque of the Red Death. (2018, Nov 05). Retrieved from https://studymoose.com/analysis-of-the-masque-of-the-red-death-essay 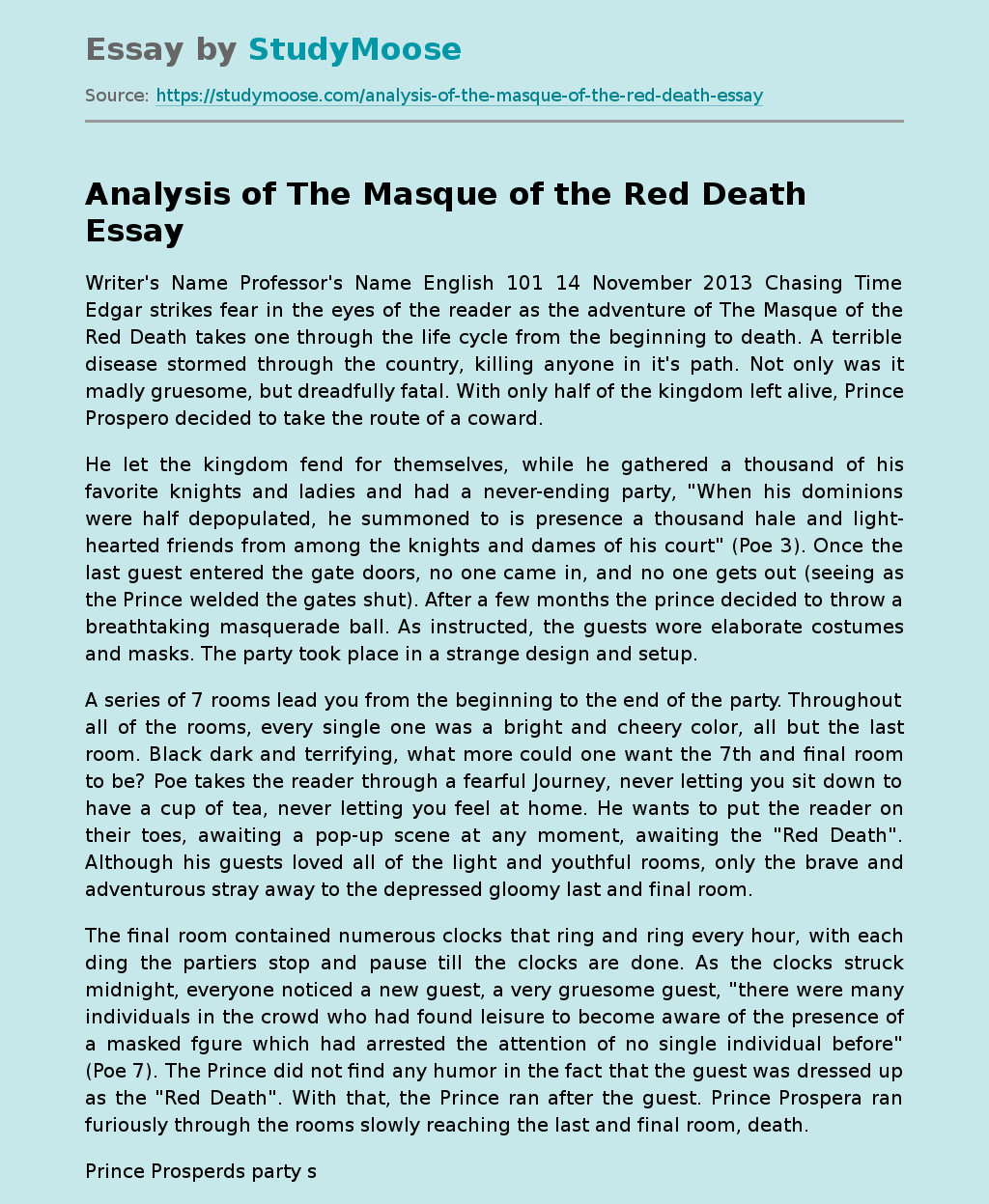