The title of the poem gives off the initial impression that the poem may focus on refugees: one who flees to seek refuge, The lives of refugee children, their parents, their feelings, their emotions and their pain. ‘For a son she soon would have to forget’. This foreshadows the idea that her son is dying, and she would have to forget him to adapt to her tragic loss. 2 The metaphor in the fist stanza, ‘No Madonna and Child could touch that picture…’, relates to the idea of Mary and her child, Jesus.

Don't use plagiarized sources.
Get Your Custom Essay on Analysis of Refugee mother and Child Just from $13,9/Page

The picture perfect image – the ideal image of motherhood. The picture of a beautiful, serene mother with her holy new born child. Realistically the scene would have been far from that idea of bliss. The idea of the first stanza is that the tenderness that the character, the mother, expresses towards her child in the poem surpasses the ideal image of Mary and Jesus. The two situations do not even compare to the depth of love and tenderness of the Refugee Mother and Child.

3 The poet uses the repetition and the contrasting ideas of the word ‘washed’ in describing the emaciated state of the refugee children. ‘Unwashed…’ – the hygienic state, ‘and ‘Washed-out…’ the physical state of the children due to the lack of food. 4 ‘Blown empty bellies’, the physical appearance of the children’s stomachs because of the limited food supply of only carbohydrates. From this unhealthy diet the combination of acids and gases blow out the stomach of the children.

This vivid description could also possibly be a pun to the blowflies in Africa. 5 ‘A ghost smile’, this metaphor could possibly be two ideas: The mother is happy because she is with her son, you can tell she is happy but her smile is faint, hard to notice. Her happiness can’t easily be seen, her smile is not shown in a physical appearance, it holds happiness that gives off its emotion in a feeling which can’t quite be explained, but can be felt by others. This metaphor shows how the mother keeps a fake, or ‘ghost’ smile on her lips for her child’s sake – so her son doesn’t have any fears or worries because he feels content because his mother is content. 6 In her eyes you can see her pride in her son. It is inconspicuous and faded like the figure of a ghost. This line of the poem conveys the mother’s pride towards her son, the poem describes this by being able to faintly see her pride towards her son in her eyes. 7 The use of the word ‘skull’ is a common symbol for death and foreshadows or represents the death of her son. 8 Singing is commonly known as a happy experience, ‘singing in her eyes’ could possibly be how the Mother expresses her pride, content and happiness in her son, and how this is passed. Somewhat like the idea of the ghost smile, you can’t see or hear the Mother singing it is seen in her eyes.

9 This simile compares the two ideas of a normal over looked action in another life and a tender and cautious action in their world, the world of the Refugee Mother and Child. In this gentle action, due to her sons dying condition, she takes care while she carefully parts his hair – her way of gently expressing love to her son. This little act being one of the few things she can do for her son and one of the few ways she can express her love to him. This action is being compared to putting flowers on a tiny grave of a dead child because it is a gentle and careful action – something you would do very cautiously. And ‘tiny grave’ because of her sons little size due to his young age. If the child is already passed on when his Mother is parting his hair, this idea of death links to the distinct previous use of the word ‘skull’, by the poet.

With this evidence, the poem could also be after the child has died and the mother is still holding and caressing her child, gently, carefully and cautiously yet – he is no longer alive. This action is explained in a simile and compares her parting his thinning hair to laying flowers on a tiny grave – another link to the possible idea that the son is already dead. The mother is gently parting her son’s hair as a way to say goodbye, since he has passed on – just like another form of saying good bye, placing flowers on a grave starting closure and acceptance.

Analysis of Refugee mother and Child. (2016, Jun 30). Retrieved from https://studymoose.com/analysis-of-refugee-mother-and-child-essay 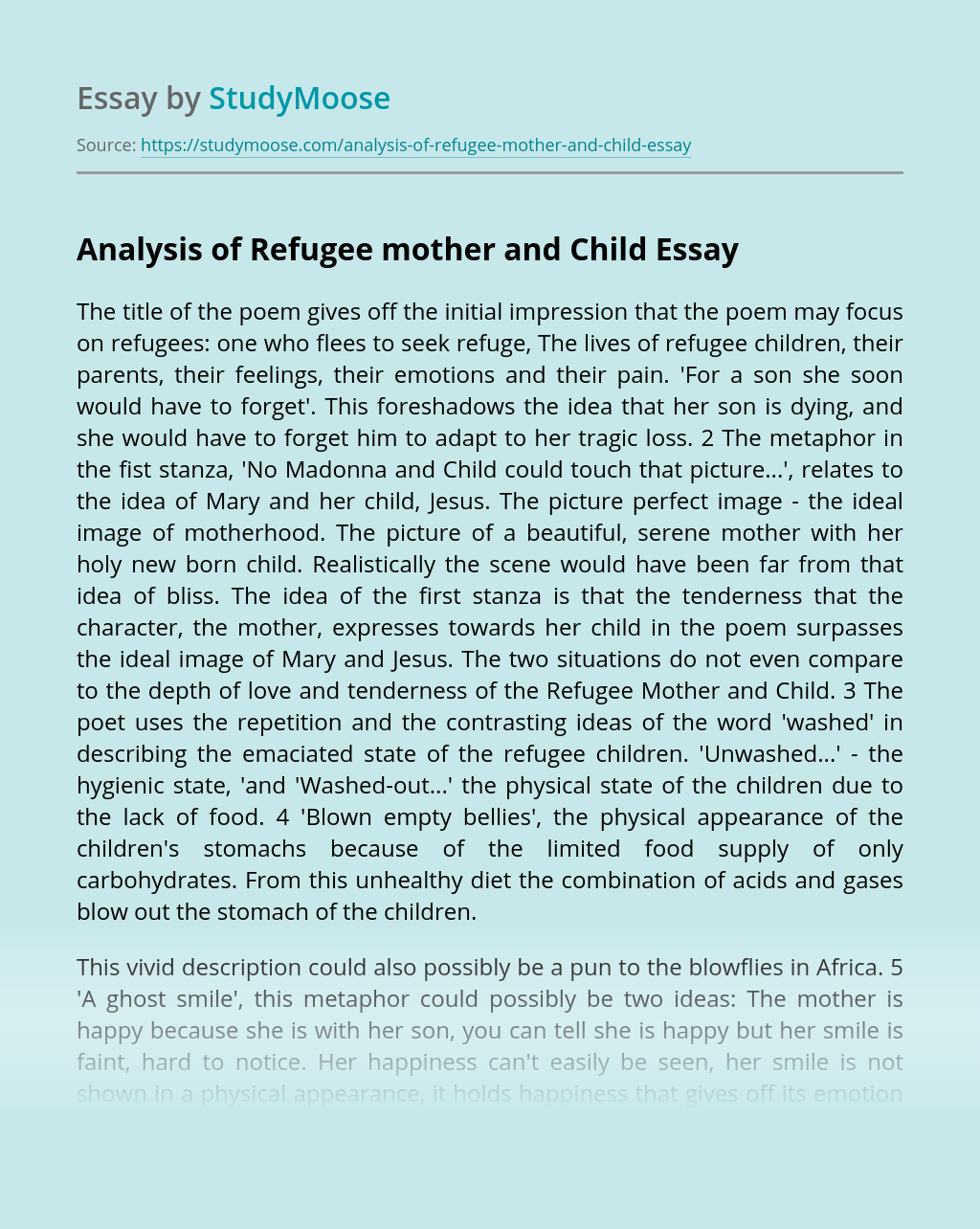 1. Analyse the differences between creative learning and creativity. Creativity and creative learning are highlighted by the Early Years Foundation Stage (EYFS) framework as being a significant aspect in the holistic development of young children. Children need to have the opportunities to respond in an individual and personal way, make choices and follow new ideas... VIEW ESSAY

View sample
What Age is Appropriate for Dating?

Young people always have conflicts with their parents about quite a delicate problem of dating. Evidently, parents always treat their children as small kids who do not have experience and knowledge about the world around and when the question about dating is provoked, a conflict is inevitable. Parents do not believe or refuse to believe... VIEW ESSAY

The story is told by an omniscient narrator who unfolds his yarn with consummate skill and a portentousness that vacillates between grim, almost biblical, wisdom and brutal irony. The narrative opens with the assertion that the vanishing of the child “was an event so cataclysmic that it forever divided time into the then and the... VIEW ESSAY

View sample
Pornography on the internet and its effects to children

Children are to be considered as the hope of the tomorrow. They are the one who make our world beautiful and meaningful because of their innocence and simplicity. But are these facts still true nowadays? Or will it be just a “dream” for us now? Children’s characters, personalities and their totality as individual first develop... VIEW ESSAY

Zinczenko is saying that common sense would say it is personal responsibility to be an active eater and know what you are putting in your mouth. In discussions of fast-food obesity, one controversial issue has been the lack of the nutritional facts. On the one hand people should do research before they eat instead of... VIEW ESSAY