In each of the books, there are instances that contradict the title statement, but on the whole the books seem to follow the pattern set in the title. Historical context, language and point of view all express the ideas behind the stories. When Dickens wrote Oliver Twist, he wanted to exemplify the corruption of a civilized world. When Golding wrote Lord of the Flies, he intended to show the true “darkness of man’s heart. ” Having been a schoolmaster with first hand experience with boys, Golding knew how evil they could become.

Don't use plagiarized sources. Get your custom essay on
“ Analysis of Oliver’s True Feelings ”
Get custom paper
NEW! smart matching with writer

In the post-war era, after the atrocities of the Nazis, people were very much aware of what cruelty the human personality was capable. In his book, Golding wanted to show that society is judged by its weakest members, or in this case, a society’s goodness. Oliver Twist was written early in the nineteenth century, at a time when children were usurped, maltreated and trapped into a life of crime.

As the son of a pauper, Dickens himself was exposed to poor treatment, and his intentions were to show people the reality of the society they lived in, but also his hopes that they could redeem themselves.

He wanted to show, “In Oliver, the principle of good surviving through every adverse circumstance, and triumphing at last. ” In many ways, the books seem to come together. They both identify the root of evil at society’s heart. Both authors use character and environment to show this, and both books have a character representing evil and good.

In Lord of the Flies, Simon represents the wholly good part of the group. Much like Oliver, he is victimised and bullied at the hands of the assembly, because his sense of right will not let him follow them.

When Simon disagrees with the crowd on the subject of the beast, the rest of the gathering interrupts him. Golding uses the small phrase, “The storm broke” to show, in a metaphorical and literal sense, that Simon’s words are drowned out by the noise of the group. “Simon’s effort fell about him in ruins, the laughter beat cruelly at him… ” This gives the impression that Simon feels compelled to disagree with the evil, which is the basis of his world, but is beaten down by what he cannot contend with.

This excerpt demonstrates that the good part of the assembly cannot be reached, because it is too difficult to go against the evil, which is so easy to get caught up in. The environment affects Simon because he is dragged along against his will, with things going out of control. This results in his death. Conversely, he creates a niche in the undergrowth, which Golding describes as ‘Simon’s Cathedral,’ which is a place of sanctity where he can escape the evil. Here, he is changing his environment.

Golding has made Simon virtually the only one who manages to escape from the atmosphere, and form it to suit his own needs, which shows a quality of good that is demonstrated only by him. Oliver escapes in a similar manner. “He [Oliver] only cried bitterly all day; and when the long, dismal night came on, spread his little hands before his eyes to shut out the darkness, and crouching in the corner, tried to sleep. ” This gives the impression of the inescapable evil that surrounds Oliver, which tries to get into his wholly good spirit, and corrupt it.

Dickens uses the language to personify the darkness as a creature, that tries to penetrate the cracks in Oliver’s defences – represented by his fingers. Dickens has made Oliver a character that contradicts the title statement. The idea that the environment reflects Oliver’s feelings is very prominent, but in some instances it actually shapes Oliver’s behaviour, too. One example is where Fagin locks Oliver in a room to convince him to become a pickpocket. The link between Simon and Oliver is probably the biggest crossover point between the two books, because there is so much alike between them.

The way that they react to the evil around them – by creating their own space – is but one example. Evil is represented in both books, far more often, and with much more intensity than good, as if goodness is a dying quality in a decaying world. In Golding’s scenario, this is especially relevant, as the civilized world is being decimated by nuclear war, which is the heart of evil. Roger is the ‘evil’ character in Lord of the Flies. He is always described as dark and sinister. “When Roger opened his eyes and saw him, a darker shadow crept beneath the swarthiness of his skin; but Jack noticed nothing.

” This suggests that the evil that Roger permeates into the group is unnoticeable at first, but slowly increases, culminating in more and more horrific acts; most notably, the death of Piggy. The parallel of Roger in Dickens’ novel is Sikes. He is the man who is responsible for Nancy’s death. In Lord of the Flies, it is Roger who causes the death of Piggy. Sikes is described as a “Terribly evil man,” who is the root of the evil in the circle of thieves that he is the co-ordinator of. “‘You can’t do it without me, I know; but it’s best to be on the safe side when one deals with you.

‘” When Sikes is talking to Fagin at this point, he is discussing the robbery of the country house, which they involve Oliver in. This is a key point in the book, because Oliver is taken away from Sikes and into the hands of the Maylies. The key words in this phrase are, “You can’t do it without me. ” This is obviously important, because it highlights the dependence of Fagin and Bill on each other. It is clear that the coalition of Fagin and Sikes is based not on trust, but on mutual benefit, which disintegrates as Oliver is taken away from them. 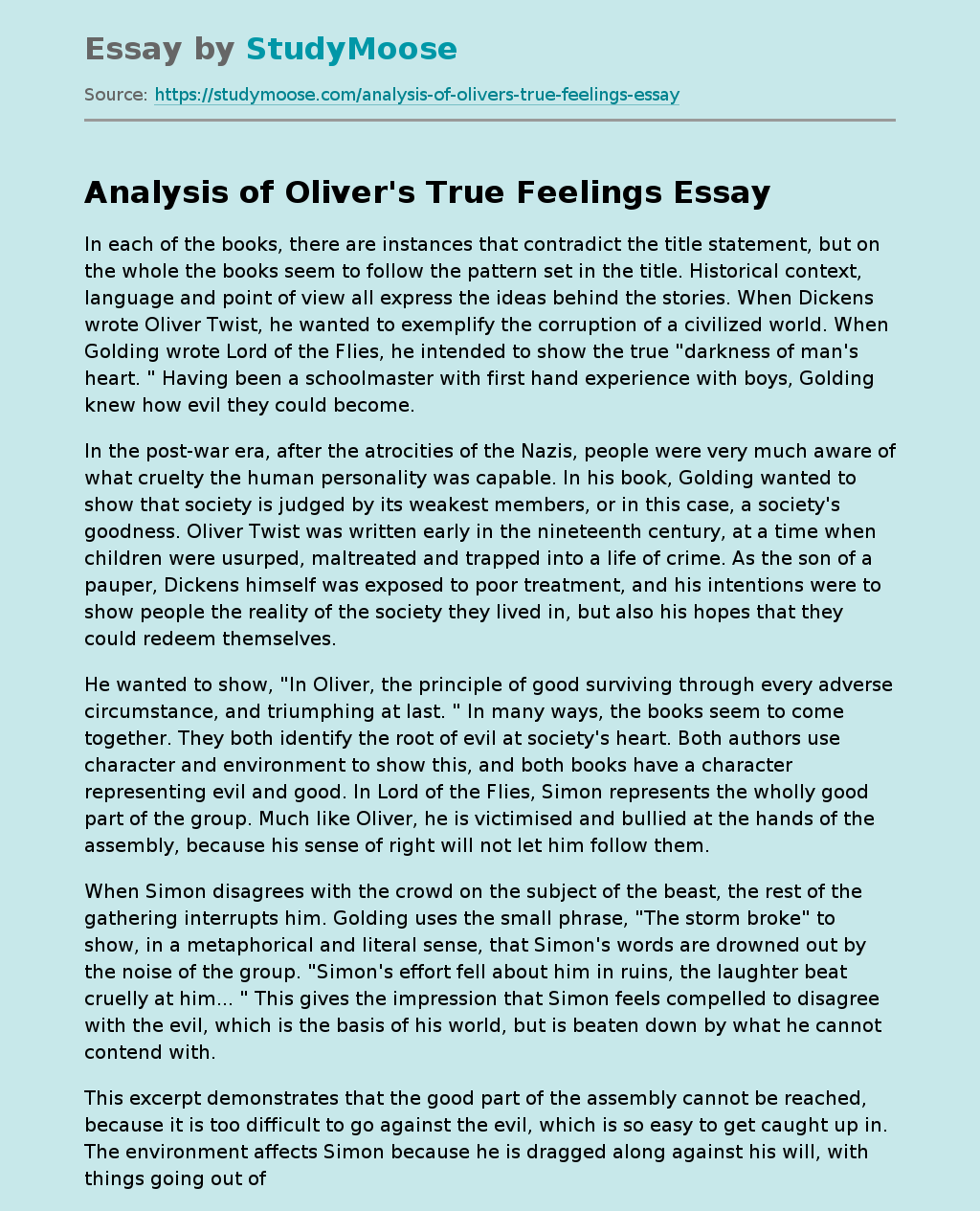