Then Scott having to ‘chart’ – suggesting the creation of a map in order to discover his wife, this emphasises the exploration of this ‘new-found-land’. The poem suggests an unsure attitude, as we see in the first line, ‘year after year’ we don’t know whether this suggest a long, drawn out relationship that could become dull, or whether this means he is happy, and the year after year suggests commitment. Time takes a prominent role in the poem, with what is described as ‘year after year’ is then shortened to passing ‘seasons’ then shrunk still to an ‘hour’ until the shifting of moods becomes sudden, ‘suddenly she would change’.

Don't use plagiarized sources. Get your custom essay on
“ Analysis of Marrysong Dennis Scott ”
Get custom paper
NEW! smart matching with writer

This suggests confusion within the relationship for Scott, as the changing of her attitudes becomes unexplainable and undetectable. This unpredictability leads us to the point of the heavy use of ‘enjambment’ in the first five lines, painting a vivid picture of uncertainty for Scott; conversely, as the poem progresses, we see a much more structured approach.

On the contrary, the poem as a whole is generally lacking in structure. The constant use of caesurae, which breaks lines using pauses, denoted by commas and full stops.

Also, the stutter of ‘[a]ll, all’’ disrupts the flow of the poem much like the punctuation mentioned. This disruptiveness also contributes to the uncertainty of Scott within the marriage. However, as we approach the concluding lines of the poem Scott evokes a discovery of certainty. He says ‘accepting her geography’ and stating that he ‘wondered’ which maybe suggests that he has no need to wander anymore.

This final couplet also features a rhyming final two lines, which suggests stability and an atmosphere of certainty.

The oxymoronic use of ‘jaunty helpless journey’ suggest that Scott is at his lover’s mercy; this is significant, as the whole poem conveys the idea that the woman dominates the relationship, and that Scott is exploring her and trying to figure her out. At the beginning of the poem we see that Scott says that she is under control by saying ‘under his eye’, this oxymoron features near to the end of the poem and, with numerous time frames being described in the lines between these two phrases, seems to suggest that after all this time he still has not been able to work her out or even gain control of their relationship.

Conversely, this contrasts with the following two lines in which Scott is stated to have figured her out ‘find his way among the landscapes of her mind’. The fourth line, ‘in the walled anger of her quarried hurt’ takes a prominent role within the poem. The use of ‘walled’ and ‘quarried’ suggests an inescapable ‘territory’ into which Scott seems to be stuck. ‘Quarried’ also suggests that Scott is trying to unearth her personality, with ‘walled’ being the defensive behavior with which he does this.

Love is a dangerous unreliable territory seems to be one of the main themes evoked by the poem. We see that Scott is continuously trying to gain power in the relationship. This seems to be unobtainable throughout the poem, however the title in itself reveals a childlike innocence about Scott; ‘Marrysong’ isn’t really a word, and sounds like a word a child would make up. It also evokes the bewildering nature of love and the complexity of marriage. Ovid: Ars Amatoria 1. 469-78 states that ‘dura tamen saxa’ (nonetheless, hard rocks) ‘molii cavantur aqua’ (are hollowed out by soft water).

At one stage of the poem Scott states that one can see ‘cool water laughing where the day before there were stones in her voice’ – Scott maybe saying that the water hollowed out the rocks and overcame the rocks to make way for love. Furthermore, in relation to territory, Ovid states that ‘capta vides Pergama sero capita tamen’ (You can see that Troy was captured after a long delay, but she was captured in the end) relating to Scott claiming that his lover’s logic is like a territory needing to be explored, and the references of time relate to Ovid stating that Troy was captured ‘after a while’. 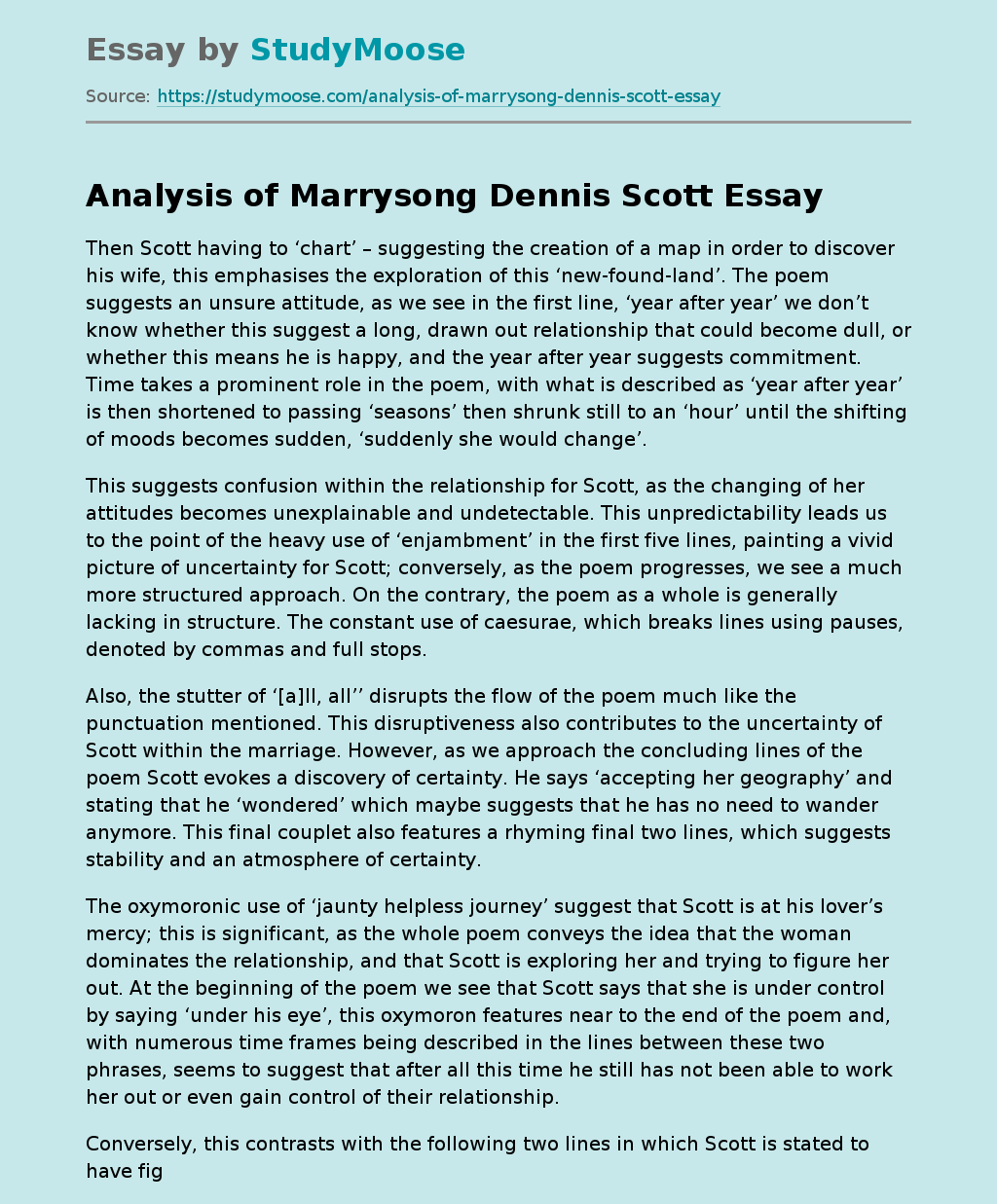