The Great Gatsby by F. Scott Fitzgerald is commonly known as a tragic love story, but is also well associated with the unattainable American Dream. Gatsby works hard to become rich, and forget his poor past. He is put into the category of new money, which wasn’t as socially accepted back then. Although he did throw huge extravagant parties, so people liked him anyways. Gatsby wanted Daisy, he was in love with her and he had to be with her.

Throughout the Great Gatsby, Fitzgerald expressed that American society in the 1920s was all about the unattainable American Dream.

Gatsby loved Daisy so much, he dedicated his life to being with her. He waited so long to get close to her, while he waited, he always liked to look at the green light at the end of Daisy’s dock.

The green light symbolizes all the hope he had for his future with Daisy. In The Great Gatsby, Nick states his thought on Gatsby’s reasoning for looking at the light: “I thought of Gatsby’s wonder as he picked out the green light at the end of Daisy’s dock. He had come a long way to his blue lawn, and his dream must have seemed so close that he could hardly fail to grasp it. He didn’t know that it was already behind him.” (Fitzgerald 189). Gatsby turned the green light into his hope for his future, but he didn’t realize their future was already in the past.

The first time Nick saw Gatsby gazing at the light he noticed how mysterious he was, simply staring at a little green light, wondering why he does that. In The Great Gatsby, Nick states how Gatsby stands in the dark dreaming of reuniting with Daisy: “He stretched out his arms toward the dark water in a curious way, and, far as I was from him, I could have sworn he was trembling. Involuntarily I glanced seaward – and distinguished nothing except a single green light, minute and far away, that might have been the end of a dock.” (Fitzgerald 26). Gatsby was symbolically trying to reach out to Daisy by physically reaching out his hand towards the light. Gatsby’s dream of being with Daisy gets very close to him, but quickly disappears.

George Wilson is a poor man who lives in the valley of ashes. He fixes rich people’s cars for a living. He befriended his wife, who has an affair with Tom Buchanan. The characterization of Wilson isn’t direct, but he is specifically tied to the valley of ashes, because he is just a plain, bland man. Wilson is connected to the valley of ashes because they are very similar, it is always grey and kind of abandoned, and Wilson is stuck there with it. In The Great Gatsby, Fitzgerald writes, “Generally he was one of these worn-out men: when he wasn’t working he sat on a chair in the doorway and stared at the people and the cars that passed along the road. When any one spoke to him he invariably laughed in an agreeable, colorless way. He was his wife’s man and not his own.” (Fitzgerald 136). George’s characterization is indirect and he is a basic, kind of boring person. He is associated with the valley of ashes, which always grey and dusty. In chapter two, Myrtle says, “Get some chairs, why don’t you, so somebody can sit down, Myrtle said. Oh sure, agreed Wilson hurriedly and went toward the little office…” (Fitzgerald 30).

This proves that Wilson again, is not his own man. He does whatever people tell him to whenever. Most people walk all over him because they are rich and he is poor, even his wife, she was having an affair and he does everything she says. Later on “I spoke to her,” he muttered, after a long silence. Later on Wilson finds an expensive dog leash and thinks that Myrtle might be having an affair, but he isn’t sure. Wilson said, “I told her she might fool me but she couldn’t fool God. I took her to the window—With an effort he got up and walked to the rear window and leaned with his face pressed against it, —and I said ‘God knows what you’ve been doing, everything you’ve been doing. You may fool me but you can’t fool God!” (Fitzgerald 159). Wilson seems to be the only one who talks about God in the book, probably because he is poor and cannot retreat back to money, he has to actually deal with his problems. He tells Myrtle that God sees everything, so that even if he doesn’t find out she’s cheating, God will know.

Gatsby takes Nick to meet Mr. Wolfshiem, a gambler who, “fixed the 1919 World Series” this meeting foreshadows that Gatsby made his fortune off of illegal business, since Wolfsheim and Gatsby are good friends. “‘I see you’re looking at my cuff buttons,’ Wolfsheim said. I hadn’t been looking at them, but I did now. They were composed of oddly familiar pieces of ivory. ‘finest specimens of human molars,’ he informed me.” (Fitzgerald 72). Meyer Wolfsheim seems a little shady owning cuffs made of human molars, and “fixing” the 1919 World Series. He is clearly a criminal and probably associates with other underground criminals, like Gatsby. All of this is also very materialistic. Many people do all of this illegal stuff for money, so they can be the upper class, buy cars, big houses, have extravagant parties, etc. It all comes back to materialism. How they are viewed and their social ranking. Wolfsheim is very fond of Gatsby, he took him, under his wing and made him who he was. In chapter four Wolfsheim said, “Yeah, Gatsby’s very careful about women. He would never so much as look at a friends wife.” (Fitzgerald 72).

This is foreshadowing because Wolfsheim is talking about what a good man Gatsby is, and how he wouldn’t even look at another mans wife. We find later that his plan is exactly the opposite of what Wolfsheim says. Gatsby knows that Daisy is very materialistic. The main part of his plan was to become extremely wealthy to win Daisy over. He thought that if he had a huge house, and a lot of stuff, she would be with him. Gatsby did everything he could to become the man he thought Daisy wanted, he even tries to take Daisy from Tom: “As Tom took up the receiver the compressed heat exploded into sound and we were listening to the pretentious chords of Mendelssohn’s Wedding March from the ballroom below. ‘Imagine marrying anybody in this heat!’ cried Jordan.” (Fitzgerald 127). Everyone complaining about how hot it is, foreshadows what is about to happen, and how tense and uncomfortable it will be, just like the heat. The heat foreshadows the discomfort between Tom and Gatsby, and what will happen between them and Daisy.

Gatsby’s love for Daisy never died, even though she did betray him. He still thought there could be a chance of them being together. Even though she was married to one of the richest men in New York and had a kid. Daisy quickly settled for a rich husband because she knew he would support her, and all she cared about was the money. She loved Gatsby but wanted to settle down, and didn’t feel like she could wait any longer. Life in the 1920’s was all about money, materialism, stuff, and the unattainable American Dream. 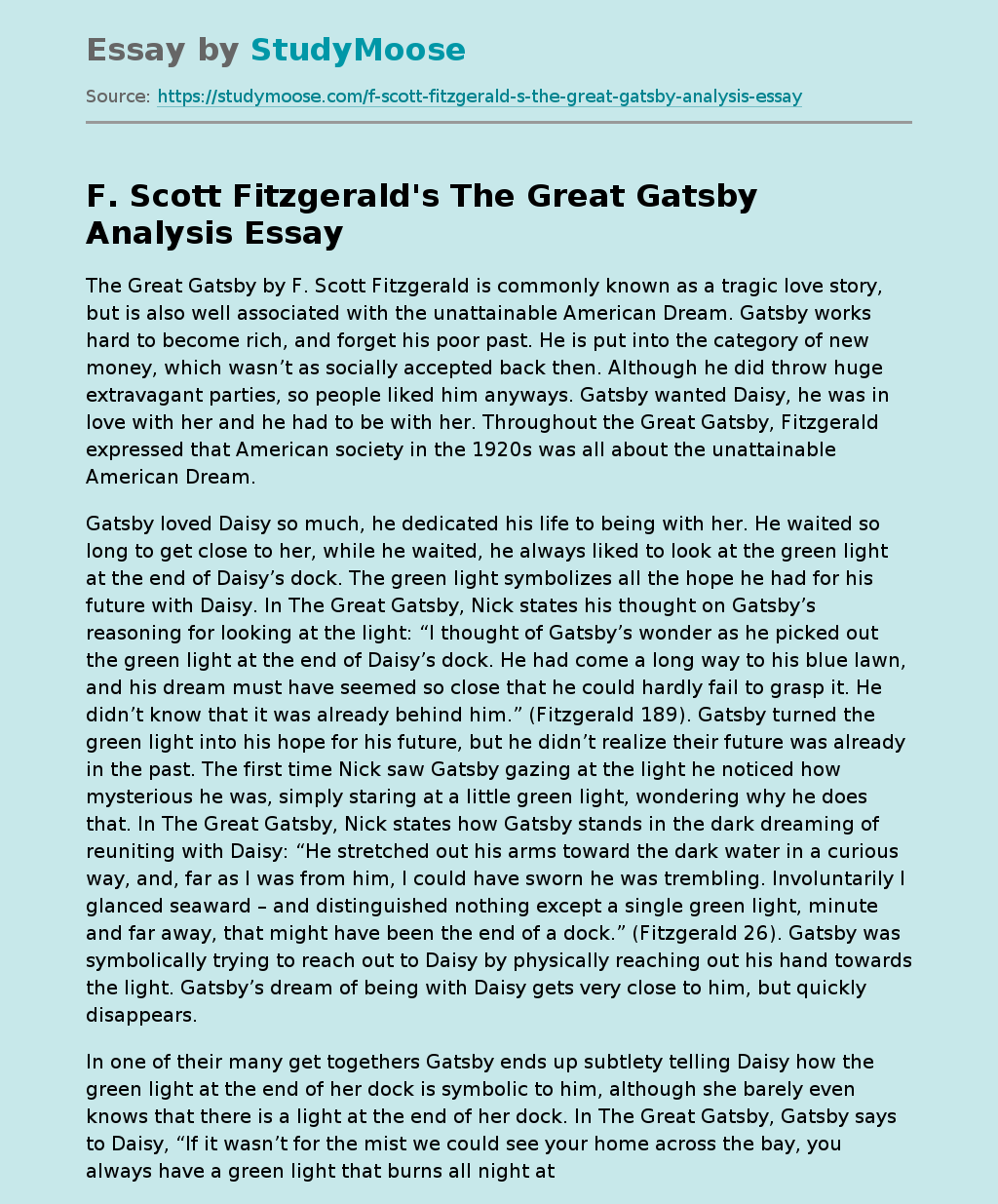