This premise does not state that God’s strengths as this argument is to prove his existence, not whether or not God is all-powerful, all-knowing and all-good. The second premise means this greatest possible being is either an imaginary being that one has thought of or, a being that we not only is not only thought of but also exists. The third premise and its sub premises states because existing in reality is greater than existing in thought, then the God we have thought of exists in reality or there must be a greater, or more perfect, being that does exist and that being is God.

Don't use plagiarized sources. Get your custom essay on
“ Analysis of Anselm’s Ontological Argument ”
Get custom paper
NEW! smart matching with writer

This leads to the conclusion, if you accept the premises then you accept the existence of the greatest being possible, God. This concept of God’s existence is also led with the idea that God is a necessary being, a being that is not dependent of something greater in order to exist. If God relied on another being, like how a children rely on parents to conceive them, then this being called God is not God because it would be imperfect.

Therefore, there must be another to call God that meets all the requirements for perfection.

However, this “Lost Island” could in no way exist. The absurdity and validity of “the lost island” quickly brought up questions as to how Anselm’s Argument cannot be absurd.

Anselm’s argument was not proven invalid until Immanuel Kant, a german philosopher during the 18th century, proposed an objection that would be the decisive blow to the Ontological argument (Immanuel Kant. Wiki). Kant’s objection is how existence is not a predicate (Mike, screen 25). A predicate is used to describe something the subject (this being God in Anselm’s Argument) is doing. In Aselm’s Argument, Anselm premise rely on that being conceived and existing in reality is something that describes God. This rationality does not follow because to exist or conceive does not describe the subject, it only tells us whether it exist or not.

Much like how fictional characters do not exist, describing cartoon for example would tell us details of what this cartoon looks like, what its habits are and common antics it goes through, but not whether it exists or not. The question of existence must fall in a separate argument that does not define the character. As there are Arguments to prove God, there are debatable arguments to disprove the God. The First version of “The Argument from Evil” goes as follow: 1. If God were to exist, then that being would be all-powerful, all-knowing, and all-good. 2. If an all-PKG existed, then there would be no evil. . There is evil. [Conclusion] Hence, there is no God (Sober, 109) The first premise is the definition of what God would be if he were to exist. That is a being that has the power to do anything, had knowledge of everything throughout the span of time and is in all ways good. The second premise is created with the first premise in mind. To expand on the second premise it states, if God were all-powerful he could stop any form of evil from happening, if he is all knowing then he has knowledge of when evil will occur and if he is all-good then God would stop all evil from happening.

If god cannot stop all evil from happening then the definition of God must be incorrect. He then must not be powerful enough to stop all evil, and/or he doesn’t know when evil until it has already occurred and/or good is not all good in that God does not wish to stop all evils. The third premise is stating the fact that there is evil in the world. The conclusion derived since that there is evil, then is what may be defined as God must be lacking in one or two of his qualities and therefore God, by definition, does not exist at all.

In order for God to be compatible with evil, God must only allow the evils that would, in turn, lead to a greater amount of good and must take the route that leads to the least amount of evil to gain the greatest amount of good. The soul building defense was created in mind that evil and God co-exist in our world. The defense is that without any evil in the world, our souls would not nurture, or, understand the concept of evil. This defense does not hold true because there has been many evils in the world that seem unacceptable, even though it may have been for the purpose of soul building.

God, and all-good being, would then only allow the evils that are essential in soul-building. This would only mean that evil that man commits against man. The reason for this is because anything that happens in nature exceeds soul-building essentials. Another defense is God having given us free will, humans ultimately are the causes of this evil. That is true but the common objection to this is that human do more than enough evil to ourselves, it is going too far to have God throw tornados, volcanic eruptions, and hurricanes at us too. At what point do human have such control over nature.

The last defense is that God simply works in mysterious ways. Who can explain why natural events take so many lives and injure many others or why some children have to go through great deals of suffering and live through it? It is God’s way and ultimately, no matter how incomprehensible the evil is, it is for the greater good. Certainly the question to God’s existence has been pondered upon by philosophers for over a very long period of time with no progress as whether God exists or not. The ontological argument created by Anselm withstood a great deal of criticism until it was disproved by Kant over 600 years after the fact. 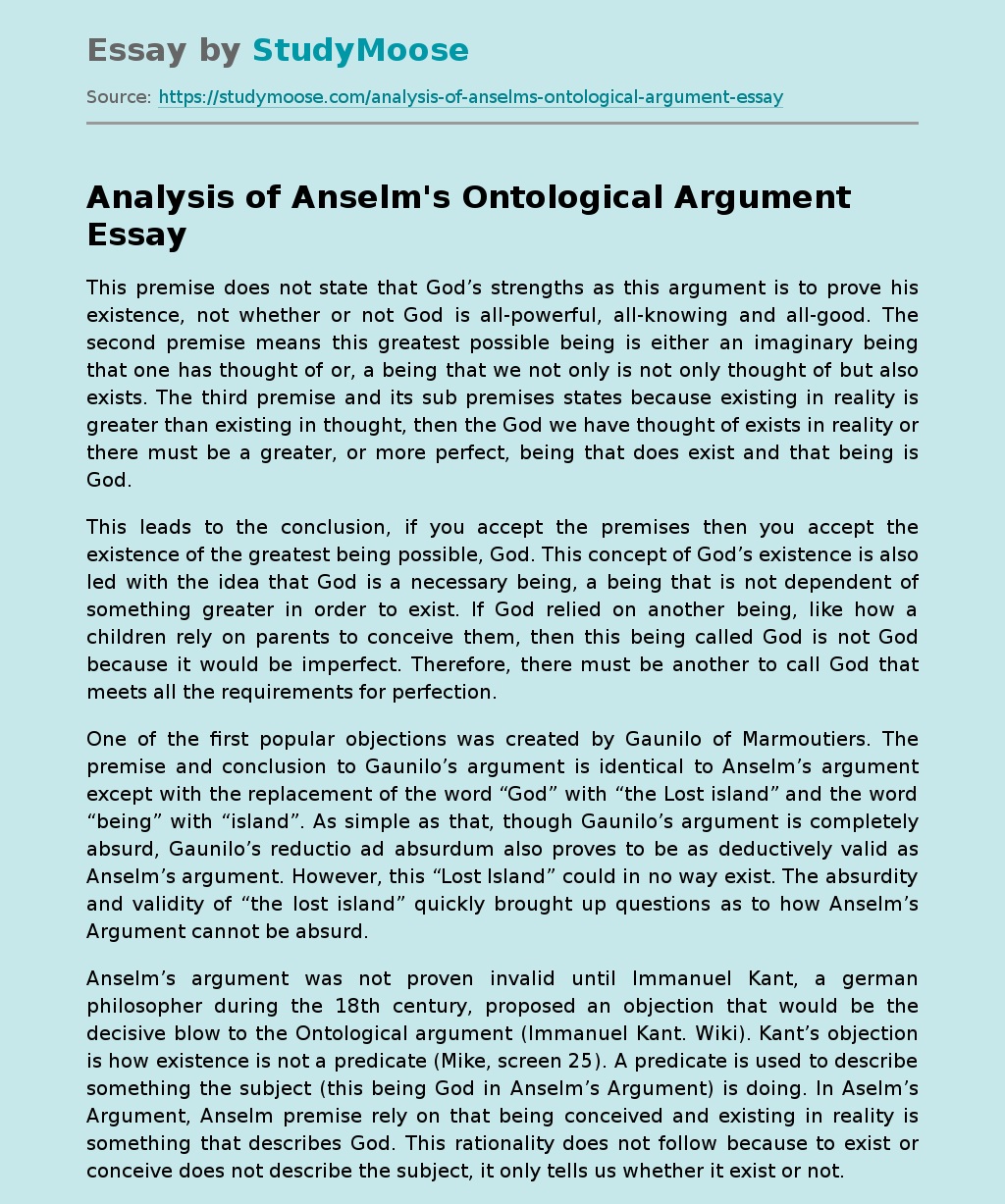