Critically assess Descartes' ontological argument for the existence of God

One of the reasons that the writings of Decartes in the period of the 17th century are considered so important is that he was attempting to answer questions which stretched back thousands of years before him and are still hotly debated centuries later to this present day. He philosophised in a time when there was a rebellion to the uncontested philosophy which had stood since Aristotle’s age nearly 2000 years earlier, in a time called the ‘enlightenment’. He was a major figure of revolutionary philosophy seeking to provide proofs and theories which would become as widely respected as Aristotle’ themselves were in a less enlightened world.

Don't use plagiarized sources. Get your custom essay on
“ Critically assess Descartes’ ontological argument for the existence of God ”
Get custom paper
NEW! smart matching with writer

His most notable work is known as his ‘Methods and Meditations’, involving a mathematical approach utilising the inherent logic within mathematics to tackle any and all fields of human inquiry. He believes that “only the things I conceive clearly and distinctly have the power to convince me completely” (Descartes, Discourse On Method And The Meditations, p147), and so by concerning himself with the very definition of something can assess its irrefutability and so genuine existence.

Decartes’ theory on the existence of God is debated in his fifth meditation entitled ‘Of the Essence of Material Things; and, Once More of God, that He Exists’.

During this meditation several analogies are presented and some mathematical facts are used as proof between the minds ability to perceive and the irrefutable essence of things. I shall attempt to summarise concisely his key arguments and proofs. Decartes asks us to consider what we think of as being a triangle, what is the “certain determined nature or form or essence of this figure” (Decartes, Discourse On Method And The Meditations, p143).

In doing so we reveal to ourselves what a triangle ‘is’, and how it can not depend on a persons mind or be something just invented by us.

For example, the fact that its angles add up to 180i?? and the square of the hypotenuse length equals the sum of the squares of the other two sides. These are the things about a triangle which are forever true for all triangles, even those not yet imagined by ourselves when we fist think of a triangle, and so are a true and clear conception of a triangle. Hence, any shape can be imagined and its properties deduced as mathematical certainties and so an irrefutable truth of its reality be obtained.

As stated by Decartes himself “can I not derive from this an argument and a proof demonstrating the existence of God? (Decartes, Discourse On Method And The Meditations, p144). At this point Decartes considers what truths would have to pertain to a God that did exist. For example, a ‘triangle’ could not be a triangle if its angles did not add up to 180i?? and so likewise an omnipotent and perfect God which can be conceived in ones mind, by its very conception its existence is encompassed in perfection. Nothing could be perfect if it lacked the perfection of existence. It is the nature of God to exist. To commensurate this he presents us with an analogy saying that if he can conceive a mountain, then it is impossible for him not to conceive a valley also.

There are valid arguments to this, some outlined by other philosophers and some by Decartes himself. For example, it is impossible to define an object in the mind and so make it exist, such as it is possible to imagine the perfect island, something which obviously does not exist in reality. Also Decartes asks us to think of the example of a winged horse, another thing which cannot be said to exist. Decartes’ argument against such criticism goes as follows. Whilst an island does exist it is not a perfect island, hence perfection and the island can be conceived separately.

What is Decartes’ definition of existence in the first place? I can see that to conceive a shape with three sides and all angles must have a sum of 180i?? then I have thought of a triangle. I however, can also conceive of my own existence, and attributing this to the existence of one supreme being seems tenuous. I would present my own analogy stating; should it be considered that a winged horse be a version of the horses we have so far witnessed with our senses but closer to perfection, then why is not a God an perfect form of my own consciousness, equally just as we have islands but not perfect islands?

The essential premise of Decartes argument is also extremely similar to earlier philosophies put forward by Plato. Plato hypothesises that there is a perfect form of everything, and that these forms all exist due to the underlying form the “Form of the Good” (Plato, Republic). It does not seem too much of a stretch to imagine the ‘Form of the Good’ to be an underlying perfection to everything, itself inseparable from ‘existence’. To not ‘muddy’ Decartes’ ontological argument with other theories too much, I shall highlight some other major criticisms specific to the fifth meditation and the ontological argument.

A German philosopher Immanuel Kant said that it was irrational to form a proof of something upon a definition formed upon our conceptions of a being which surpasses much of our understanding. In other words, something indefinable. Also to assert whether something can either exist or not, and that this is a definable property of something does not change our essential definition of the object, just the empirical ability to encounter it. Hence, for something to be proven, empirical evidence is needed.

For example dreams exist, but only because we accept an idea of what a dream is. There is no physical way to replay a dream. The same can be said of God. God is a reality due to the belief of the underlying presence in a persons life. I do not think that Decartes has successfully proved the existence of God, and that there are valid criticisms of his argument, but neither has God’s existence been disproved. The ‘Method and Meditations’ are an interesting and provocative piece of work, and brought philosophy forward to a more modern age. 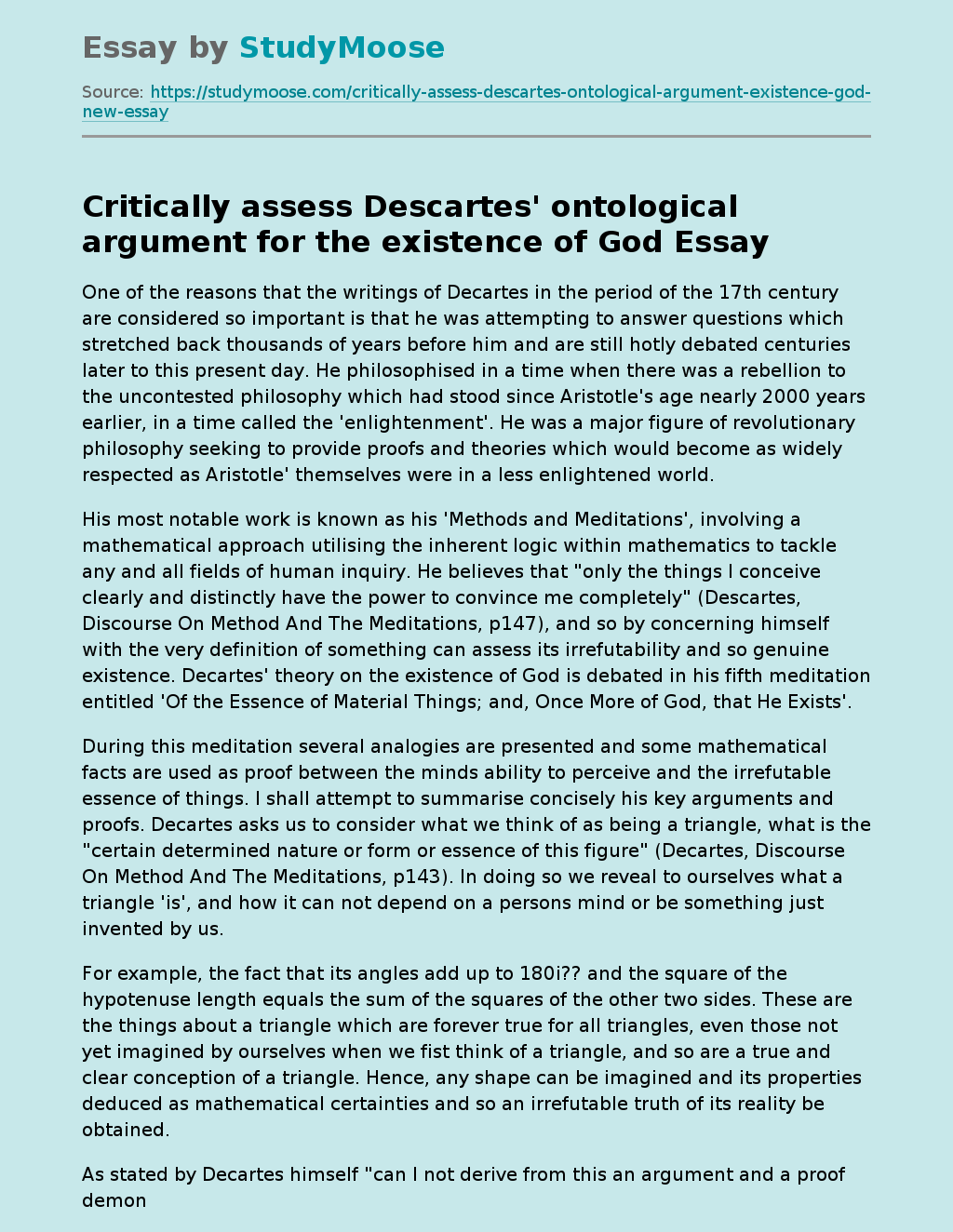