* `The hurricane`- this is a song by bob Dylan. The song is about Rubin carter ( a iconic black boxer) who did 22 years in prison for a triple-homicide that he didn’t commit

* `Mountain language`- a play by Harold Pinter. This is a play about a group of `Mountain people` who are persecuted because of their language.

There were four different themes that ran through both of the stimuli: Racism, injustice, corruption and bigotry (prejudice).

To explore the stimuli we went through various exercises.

Don't use plagiarized sources. Get your custom essay on
“ Analysis of The hurricane`- a song by bob Dylan and Mountain language`- a play by Harold Pinter ”
Get custom paper
NEW! smart matching with writer

For `the hurricane` we created a scene in a bar where someone had been murdered. From this scene we thought-tracked the characters in the bar to explore the reactions of people close to the murdered person, and how peoples prejudices taken over their rational thought in the face of grief. From this scene, we also created a CSI ( crime scene investigation) to explore the methods of how police go about ascertaining the identity of the murderer and how the complexity ( and alteration) of evidence can lead police astray as to who the criminal is.

We also created a scene regarding the difficulty of Rubin’s childhood. We were given the quote: “the best thing I can say about my childhood is that I survived it.” and had to construct a scene involving Rubin having a run in with the law. We did this so that we could empathise with Rubin and the ordeals that he went through in his childhood.

In a series of weeks we also went through exercises based around Pinter’s `mountain language`.

To start with, to get to grips with the play, we studied the text and then acted out a scene from the play. This was incredibly helpful as it let us interpret the text into an actual scene. We did an exercise where we had to select ten boxes in pairs at random ( big or small). A big box corresponded to a sentence, whereas a small box meant only one word. We picked our boxes, and then we were given a starting sentence, from that we had to create a scene by only using the boxes we picked.

This helped as it gave us an incite into the way that Harold Pinter structured the language of his plays. It also helped our improvisation skills as we had to react from any given stimuli with certain guidelines. Lastly on the stimulus of `mountain language` we were asked to try to create a new scene for the play, we were allowed to have our scene at any part of the play as long as it tied in with the themes of the play. This helped our organisational skills as we were given a set of themes to adhere of scene around, and a set time limit in which to complete the scene.

For this project we were given the themes of racism, injustice, corruption and prejudice and told to create a play exploring said themes. Having explored the stimuli we took what we had learned to worked on our own pieces.

Our final concept drew on the story telling techniques used in the film `Forrest Gump` but elaborated on this dramatic devise in quite some detail. Our first idea for our final concept was the same idea as used in `Forrest Gump`, to tell someone’s life story and to ract out these stories. We didn’t like this idea as we found it a rather bland way to portray the serious issues involved. Our second idea for the final concept played around wih the idea of having dual storylines enacted in one play.

The idea was that we would act out the life of a man and his turbulent childhood in alternating scenes, to show how aspects from his childhood made him what he is today. We stopped pursuing this idea when we realised the difficulty involved in visually trying to make the audience see regression in the character while still maintaining an air of seriousness to the play. Our (then) final idea in the final concept of our play was to explore the way that people can relate to literature.

The story was that of a misogynistic man who can only escape his dysfunctional home life by reading about others’ pain. He is leading his family into a bitter spiral of hate, and if he doesn’t do something about it soon he will lose all that he holds dear to him. In the play the man virtually sees his life played out in a book apart from the fact that he is a man who has an underlying hatred for women and the book character is a black man who has a fundamental loathing of white people. As the man reads to the end of the book, he finds that the book character falls into alcoholism and bitter self-pity and starts to think about what would happen if he continued to carry on the way that his life is carrying him.

There is an awesome scene in this play where the man stands in the middle, between the book world and the real world. The characters from the book world start to recognise him as the character from the book and the characters from the real world just see him as himself. The book characters and real world characters are unaware of the others presence. This tips the man over the edge and he realises that he must change his ways and make amends with everyone that he has done wrong to. Alas this was not to be after a member of our group renounced from the project. This left us with a whole bunch of scenes, and no main character (the group member that had quit was the main character of the book world) that left us in a very bad situation. We only had two weeks left, and no play.

We used some of the existing scenes and altered them slightly to create our final final idea. This is the story of an abusive husband and father and the way he, unintentionally, moulds his daughters image of men. This play explores the idea of a prejudice against men and the well known injustice of always believing the younger sibling. There is an awesome scene in this play to, where the husband has abused his wife to the point that she dreams of therapy. In this scene there is a key theme running through it; the word crazy.

This word symbolises the way she feels and the way her husband thinks of her. The wife cannot take the abuse anymore and decides to take her own life. when the family discover the corpse, there is a dramatic scene where the daughter reveals her true feelings for her father whilst threatening to kill him with her mothers suicide weapon, she surprises everyone when she ends up pointing toward her head and killing herself to be with her dead mother, and overall, away from her father.

Analysis of The hurricane`- a song by bob Dylan and Mountain language`- a play by Harold Pinter. (2020, Jun 01). Retrieved from https://studymoose.com/analysis-hurricane-song-bob-dylan-mountain-language-play-harold-pinter-new-essay 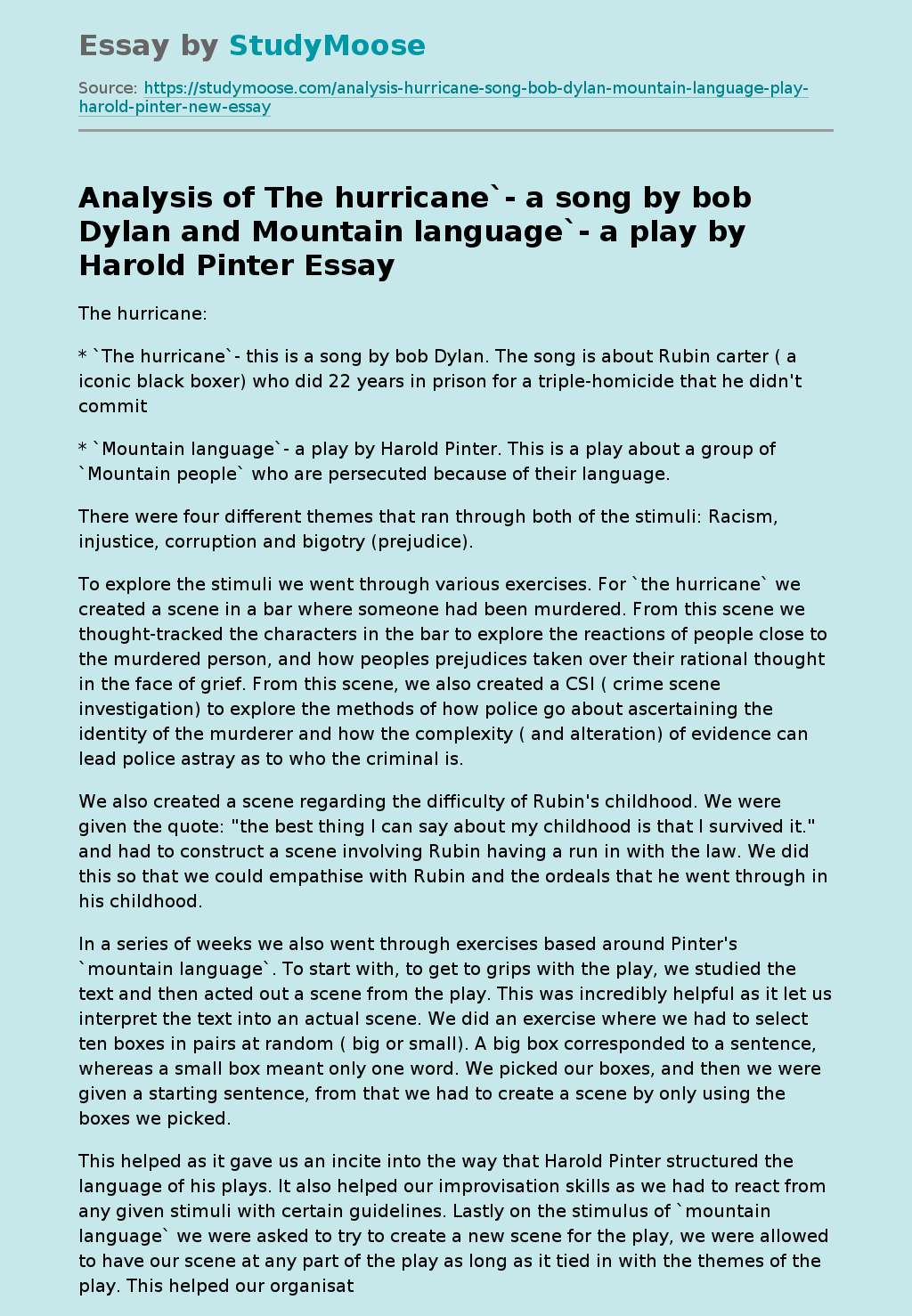